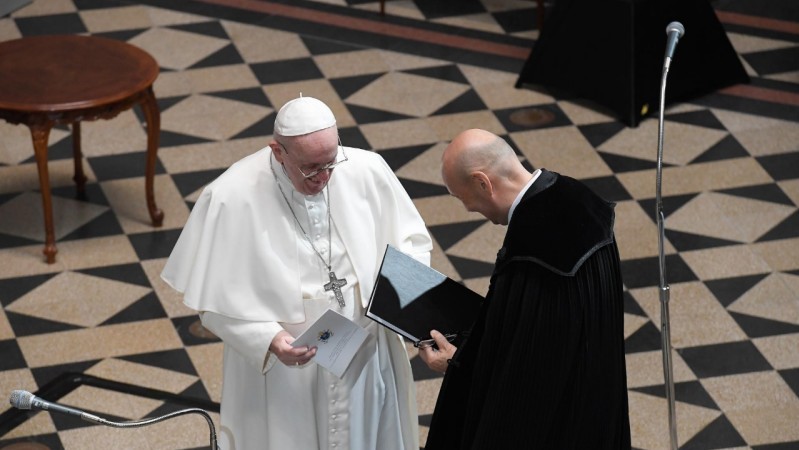 Pope Francis meets Bishop József Steinbach of the Hungarian Reformed Church, President of the Ecumenical Council of Churches of Hungary, during his visit to Budapest on September 12, 2021. Photo courtesy of Vatican Media.

During his brief visit to Hungary on September 12, 2021, Pope Francis met with representatives of the Ecumenical Council of Churches and some of the country's Jewish communities at the Museum of Fine Arts in Budapest. After receiving greetings from Christian and Jewish leaders, Pope Francis spoke to the assembly. Read the full text of his message below.

Dear Brothers, I am happy that we are able to meet and I thank you for your kind words and for your presence today, side by side. These are signs of a great desire for unity. They tell us of a journey, often demanding and in past times not always easy, that you have undertaken with courage and good will, supporting one another under the watchful eye of the Most High, who blesses brothers and sisters who dwell in unity (cf. Ps 133:1). As I look out at you, my brothers and fellow Christians, I bless your continuing journey towards full communion. I was moved by the words of our Calvinist brother, Bishop József Steinbach, President of the Ecumenical Council of Churches of Hungary – thank you. I think of the Abbey of Pannonhalma, the pulsing spiritual heart of this country, where three months ago you met to reflect and pray together. To pray together for one another and to cooperate in charity with one another for the sake of this world which God loves so much (cf. Jn 3:16): this is the most concrete route to full unity. In greeting you, my dear brothers in the faith of our father Abraham, I am grateful to Rabbi Zoltán Radnóti for those very profound words that touched my heart. I express my appreciation for your efforts to break down the walls that separated us in the past. Jews and Christians alike, you strive to view one another no longer as strangers but as friends, no longer as foes but as brothers and sisters. This change of outlook is blessed by God; it is a conversion that makes possible new beginnings, a purification that brings new life. These days are marked by the solemn celebrations of Rosh Hashanah and Yom Kippur; I offer my best wishes for these feasts, which are moments of grace and a summons to spiritual renewal. The God of our fathers always points us in new directions. Just as he transformed the desert into a highway to the Promised Land, so he wishes to bring us out of the barren deserts of bitterness and indifference, to that land of fellowship for which we long. It is not by chance that, in the Scriptures, those especially called to follow the Lord must always set out on a journey towards unexplored lands and unfamiliar places. We think of Abraham, who had to leave behind his home, family and native land. Those who follow God are called to leave certain things behind. We too are being asked to leave behind our past misunderstandings, our claims to being right while others are wrong, and to take the path that leads towards God’s promise of peace. For his plans are always for peace, and never for misfortune (cf. Jer 29:11). 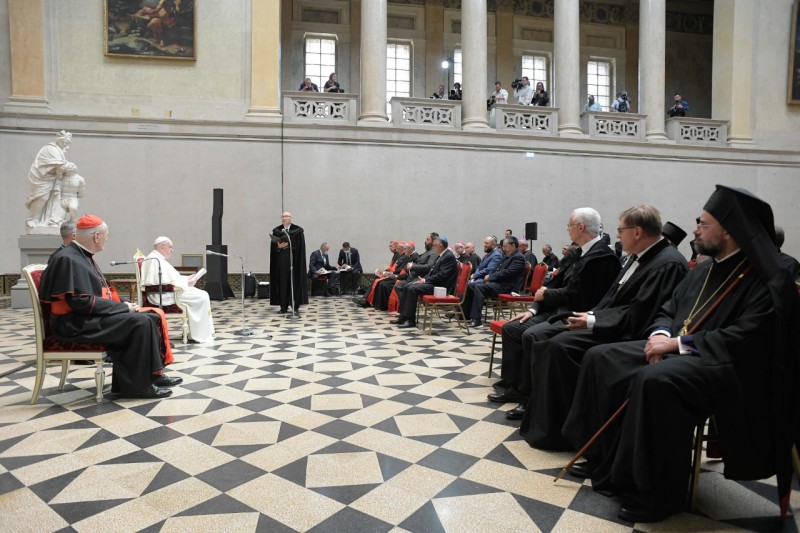 Pope Francis receives greetings from the President of the Ecumenical Council of Churches of Hungary, Bishop József Steinbach, during his visit to Budapest on September 12, 2021. Photo courtesy of Vatican Media.
Here I would like to reflect with you on the evocative image of the Chain Bridge connecting the two halves of this city. The bridge does not fuse those two parts together, but rather holds them together. That is how it should be with us too. Whenever we were tempted to absorb the other, we were tearing down instead of building up. Or when we tried to ghettoize others instead of including them. How often has this happened throughout history! We must be vigilant and must pray that it never happens again. And commit ourselves to fostering together an education in fraternity, so that the outbursts of hatred that would destroy that fraternity will never prevail. I think of the threat of antisemitism still lurking in Europe and elsewhere. This is a fuse that must not be allowed to burn. And the best way to defuse it is to work together, positively, and to promote fraternity. The bridge has yet another lesson to teach us. It is supported by great chains made up of many rings. We are those rings, and each of us is essential to the chain. We can no longer live apart, without making an effort to know one another, prey to suspicion and conflict. A bridge unites. In this sense, it reminds us of the concept, so fundamental in Scripture, of covenant. The God of the covenant asks us not to yield to separatism or partisan interests. He does not want us to ally ourselves with some at the expense of others. Rather, he wants individuals and communities to be bridges of fellowship with all. In this country, you who represent the majority religions are responsible for promoting the conditions that enable religious freedom to be respected and encouraged for all. You are likewise called to be role models for everyone. Let it never be said that divisive words come from the mouths of religious leaders, but only words of openness and peace. In our world, torn by so many conflicts, this is the best possible witness on the part of those who have been graced to know the God of the covenant and of peace. The Chain Bridge is not only the best-known, but also the oldest in the city. Many generations have crossed over it. It invites us to think back on the past. There we will encounter suffering and bleak moments, misunderstandings and persecutions, but on a deeper level we will find a greater, shared spiritual heritage. This precious patrimony can enable us, together, to build a different future. I am moved by the thought of all those friends of God who shone his light on the darkness of this world. I think in particular of Miklós Radnóti, a great poet of this country. His brilliant career was cut short by the blind hatred of those who, for no other reason than his Jewish origins, first prevented him from teaching and then separated him from his family. 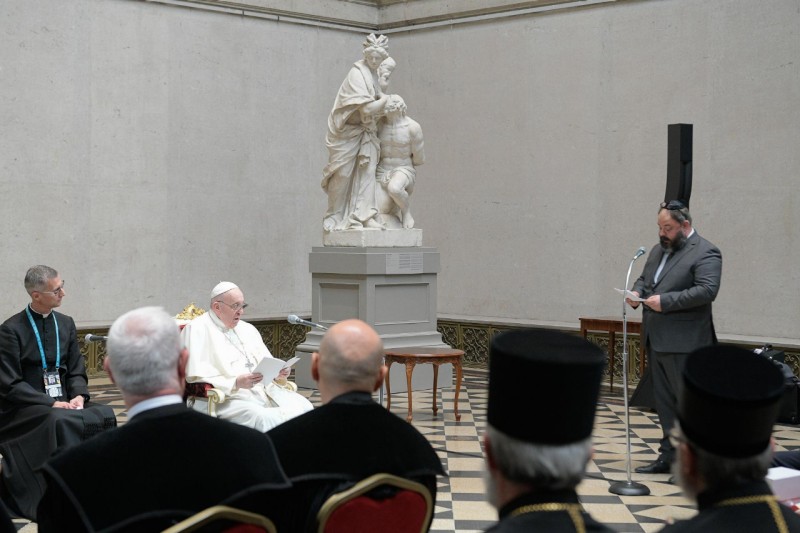 Pope Francis receives greetings from Zoltán Radnóti, a senior rabbi of Budapest, during his visit to Hungary, on September 12, 2021. Photo courtesy of Vatican Media.
Imprisoned in a concentration camp, in the darkest and most depraved chapter of human history, Radnóti continued until his death to write poetry.  His Bor Notebook was his only collection of poems to survive the Shoah. It testifies to the power of his belief in the warmth of love amid the icy coldness of the camps, illumining the darkness of hatred with the light of faith. The author, crushed by the chains that constrained his soul, discovered a higher freedom and the courage to write that, “as a prisoner… I have taken the measure of all that I had hoped for” (Bor Notebook, Letter to his Wife).  He also posed a question that resonates with us today: “And you, how do you live? Does your voice find an echo in this time?” (Bor Notebook, First Eclogue). Our voices, dear brothers and sisters, must not fail to echo that Word given us from Heaven, echoes of hope and peace. Even if no one listens or we are misunderstood, may our actions never deny the Revelation to which we are witnesses. Finally, in the solitude and desolation of the concentration camp, as he realized his life was fading away, Radnóti wrote: “I am now myself a root... Once a flower, I have become a root” (Bor Notebook, Root). We too are called to become roots. For our part, we usually look for fruits, results or affirmation. Yet God makes his word fruitful on the earth with a soft rain that makes the fields flower (cf. Is 55:10). He reminds us that our faith journeys are but seeds, seeds that then become deep roots nourishing the memory and enabling the future to blossom. This is what the God of our fathers asks of us, because – as another poet wrote – “God waits in other places; he waits beneath everything. Where the roots are. Down below” (Rainer Maria Rilke, Vladimir, the Cloud Painter). We can only reach the heights if we have deep roots. If we are rooted in listening to the Most High and to others, we will help our contemporaries to accept and love one another. Only if we become roots of peace and shoots of unity, will we prove credible in the eyes of the world, which look to us with a yearning that can bring hope to blossom. I thank you and I encourage you to persevere in your journey together, thank you! Please forgive me for speaking while seated, but I am no longer fifteen years old! Thank you. Text courtesy of Libreria Editrice Vaticana (click here for original source)