Pope Francis' homily for the Solemnity of SS. Peter and Paul 2019 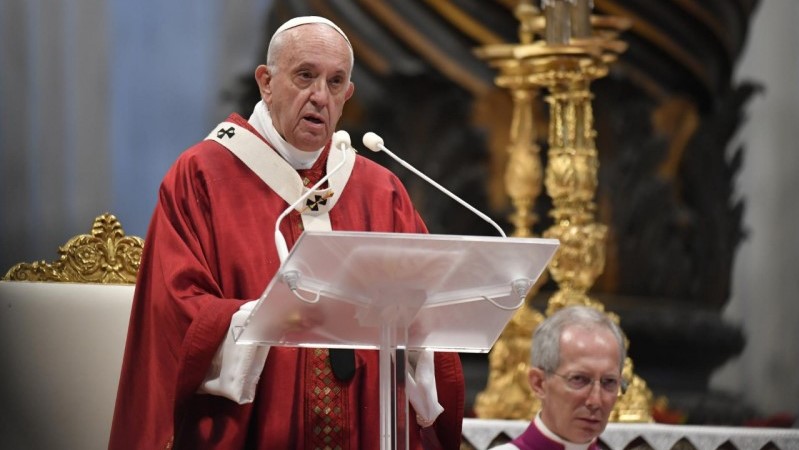 Pope Francis delivers the homily at Mass in St. Peter's Basilica for the Solemnity of SS. Peter and Paul on June 29, 2019 (Photo courtesy of Vatican Media)
The Apostles Peter and Paul stand before us as witnesses. They never tired of preaching and journeying as missionaries from the land of Jesus to Rome itself. Here they gave their ultimate witness, offering their lives as martyrs. If we go to the heart of that testimony, we can see them as witnesses to life, witnesses to forgiveness and witnesses to Jesus. Witnesses to life. Their lives, though, were not neat and linear. Both were deeply religious: Peter was one of the very first disciples (cf. Jn 1:41), and Paul was “zealous for the traditions of [his] ancestors” (Gal 1:14). Yet they also made great mistakes: Peter denied the Lord, while Paul persecuted the Church of God. Both were cut to the core by questions asked by Jesus: “Simon son of John, do you love me?” (Jn 21:15); “Saul, Saul, why do you persecute me?” (Acts 9:4). Peter was grieved by Jesus’ questions, while Paul was blinded by his words. Jesus called them by name and changed their lives. After all that happened, he put his trust in them, in one who denied him and one who persecuted his followers, in two repentant sinners. We may wonder why the Lord chose not to give us two witnesses of utter integrity, with clean records and impeccable lives? Why Peter, when there was John? Why Paul, and not Barnabas? There is a great teaching here: the starting point of the Christian life is not our worthiness; in fact, the Lord was able to accomplish little with those who thought they were good and decent. Whenever we consider ourselves smarter or better than others, that is the beginning of the end. The Lord does not work miracles with those who consider themselves righteous, but with those who know themselves needy. He is not attracted by our goodness; that is not why he loves us. He loves us just as we are; he is looking for people who are not self-sufficient, but ready to open their hearts to him. People who, like Peter and Paul, are transparent before God. Peter immediately told Jesus: “I am a sinful man” (Lk 5:8). Paul wrote that he was “least of the apostles, unfit to be called an apostle” (1 Cor 15:9). Throughout life, they preserved this humility, to the very end. Peter died crucified upside down, since he did not consider himself worthy to imitate his Lord. Paul was always fond of his name, which means “little”, and left behind his birth name, Saul, the name of the first king of his people. Both understood that holiness does not consist in exalting but rather in humbling oneself. Holiness is not a contest, but a question of entrusting our own poverty each day to the Lord, who does great things for those who are lowly. What was the secret that made them persevere amid weakness? It was the Lord’s forgiveness. Let us think about them too as witnesses to forgiveness. In their failings, they encountered the powerful mercy of the Lord, who gave them rebirth. In his forgiveness, they encountered irrepressible peace and joy. Thinking back to their failures, they might have experienced feelings of guilt. How many times might Peter have thought back to his denial! How many scruples might Paul have felt at having hurt so many innocent people! Humanly, they had failed. Yet they encountered a love greater than their failures, a forgiveness strong enough to heal even their feelings of guilt. Only when we experience God’s forgiveness do we truly experience rebirth. From there we start over, from forgiveness; there we rediscover who we really are: in the confession of our sins. 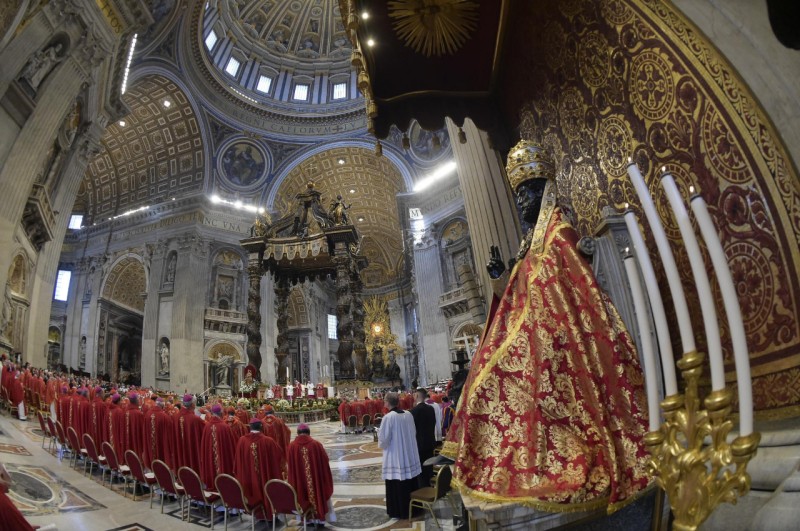 Mass in St. Peter's Basilica for the Solemnity of SS. Peter and Paul on June 29, 2019 (Photo courtesy of Vatican Media)
Witnesses to life and witnesses to forgiveness, Peter and Paul are ultimately witnesses to Jesus. In today’s Gospel, the Lord asks: “Who do people say that the Son of Man is?” The answers evoke figures of the past: “John the Baptist, Elijah, Jeremiah or one of the prophets”. Remarkable people, but all of them dead. Peter instead replies: “You are the Christ” (Mt 16:13-14.16). The Christ, that is, the Messiah. A word that points not to the past, but to the future: the Messiah is the one who is awaited, he is newness, the one who brings God’s anointing to the world. Jesus is not the past, but the present and the future. He is not a distant personage to be remembered, but the one to whom Peter can speak intimately: You are the Christ. For those who are his witnesses, Jesus is more than a historical personage; he is a living person: he is newness, not things we have already seen, the newness of the future and not a memory from the past. The witness, then, is not someone who knows the story of Jesus, but someone who has experienced a love story with Jesus. The witness, in the end, proclaims only this: that Jesus is alive and that he is the secret of life. Indeed, Peter, after saying: “You are the Christ”, then goes on to say: “the Son of the living God” (v. 16). Witness arises from an encounter with the living Jesus. At the centre of Paul’s life too, we find that same word that rises up from Peter’s heart: Christ. Paul repeats this name constantly, almost four hundred times in his letters! For him, Christ is not only a model, an example, a point of reference: he is life itself. Paul writes: “For me to live is Christ” (Phil 1:21). Jesus is Paul’s present and his future, so much so that he considers the past as refuse in comparison to the surpassing knowledge of Christ (cf. Phil 3:7-8). Brothers and sisters, in the presence of these witnesses, let us ask: “Do I renew daily my own encounter with Jesus?” We may be curious about Jesus, or interested in Church matters or religious news. We may open computer sites and the papers, and talk about holy things. But this is to remain at the level of what are people saying? Jesus does not care about polls, past history or statistics. He is not looking for religion editors, much less “front page” or “statistical” Christians. He is looking for witnesses who say to him each day: “Lord, you are my life”. Having met Jesus and experienced his forgiveness, the Apostles bore witness to him by living a new life: they no longer held back, but gave themselves over completely. They were no longer content with half-measures, but embraced the only measure possible for those who follow Jesus: that of boundless love. They were “poured out as a libation” (cf. 2 Tim 4:6). Let us ask for the grace not to be lukewarm Christians living by half measures, allowing our love to grow cold. Let us rediscover who we truly are through a daily relationship with Jesus and through the power of his forgiveness. Just as he asked Peter, Jesus is now asking us: “Who do you say that I am?”, “Do you love me?” Let us allow these words to penetrate our hearts and inspire us not to remain content with a minimum, but to aim for the heights, so that we too can become living witnesses to Jesus. Today we bless the pallia for the Metropolitan Archbishops named in the past year. The pallium recalls the sheep that the shepherd is called to bear on his shoulders. It is a sign that the shepherds do not live for themselves but for the sheep. It is a sign that, in order to possess life, we have to lose it, give it away. Today our joy is shared, in accordance with a fine tradition, by a Delegation from the Ecumenical Patriarchate, whose members I greet with affection. Your presence, dear brothers, reminds us that we can spare no effort also in the journey towards full unity among believers, in communion at every level. For together, reconciled to God and having forgiven one another, we are called to bear witness to Jesus by our lives. Text courtesy of Libreria Editrice Vaticana (Click here for original source.) 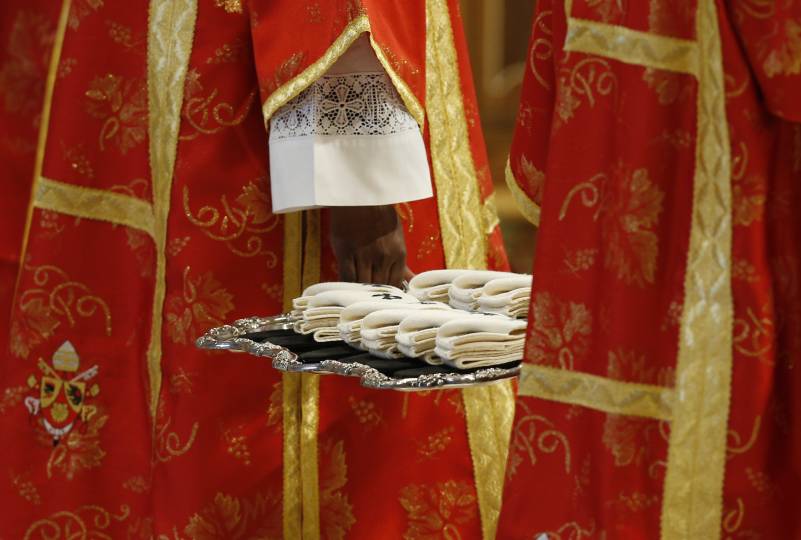 Servers hold a tray of palliums as Pope Francis celebrates Mass marking the feast of SS. Peter and Paul in St. Peter's Basilica at the Vatican on June 29, 2019. After the Mass the pope presented palliums to new archbishops from around the world. (CNS photo/Paul Haring)