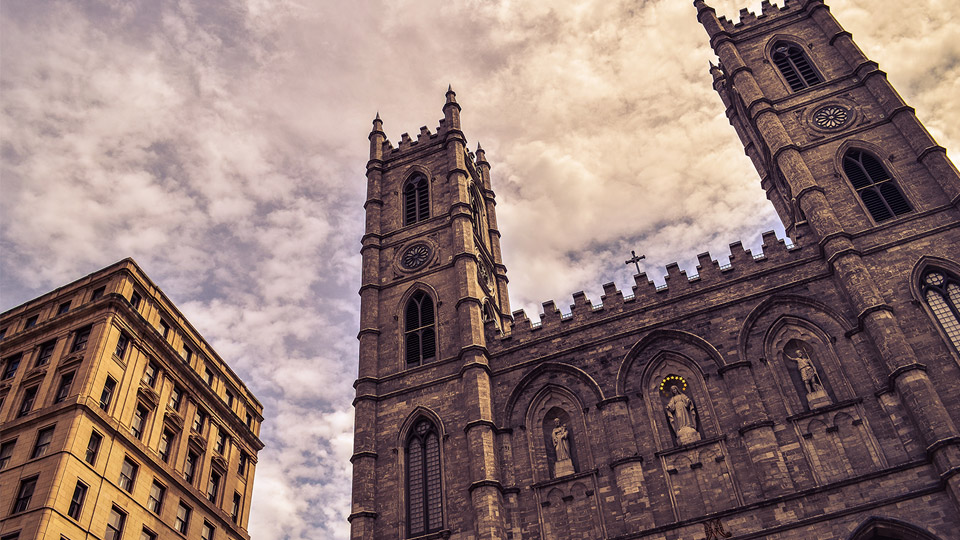 The staff of Salt + Light Media come from 14 different countries. This summer, for Canada's 150th anniversary, we are reflecting on what makes Canada so special to each of us. Here Marc Boudignon, Senior Editor, reflects on the impact the church in Québec has had on his family.

Like most families, we try to get away at least once each summer. It doesn't have to be far, but we find that some change of scenery – even if it is only for a night – does wonders for our physical, emotional and spiritual well-being. So it came to be that we arrived in Montréal. The destination sort of happened by chance: a fantastic VIA seat sale in honour of Canada's 150th anniversary, coupled with the city being far enough away (but not too far) so as to make you feel like you are really going somewhere else, plus the added benefit of exposing my daughter, who is enrolled in a french immersion programme, to more of la belle langue than she's accustomed to hearing at home. The location and the timing, in retrospect, was fortuitous. Not only was it a significant anniversary for the country, but it was also the 375th anniversary of the city. We didn't realize this until we got off the train, hit the sidewalks and witnessed all of the celebratory signage hanging from lamp posts, bus shelters and newspaper boxes. On our way to the hotel, we walked through Old Montréal. It was impossible not to feel the immensity and depth of history around us. The irregular, sunken cobblestone and the miniature lakes which pooled on top, post-rainstorm. Classical sculptures that looked diseased with spots and streaks of verdigris, yet remained stoic through their indignity. The façades of unoccupied storefronts with their faded signs, winking at names of businesses that hadn't existed in the city for centuries. As urban tableau, the scene was enthralling. Whether standing at the foot of Notre Dame Cathedral, being in awe of its majestic beauty, or stopping at a street corner to appreciate a simple relief of St. Marguerite Bourgeoys, it was remarkably easy to forget the turbulent, modern reality that existed mere steps away in the new city. One began to understand why so many tourists never even bother to venture beyond the old perimeter, where the street signs change from red to white, and most likely the truest expression of being a Montréaler today can be found. Each place, like each person, is comprised of, and often at odds with, their past and present selves. A city's future, as well as a country's future, is a constant reckoning of the two. For me, Québec has always represented a delineating line between my family's past and its present. My mother and both of my in-laws immigrated from the UK to Canada by boat across the Atlantic. When they arrived in Canada, this was the first province they saw. Mostly likely, they encountered some mixture of the francophonie and anglophonie communities before setting off by train to Ontario. If it weren't for this passage, this invitation from one country to another, I certainly wouldn't have been born. And my wife would've begun her life in the north of England instead of the Great White North. How easily an open or closed harbour dictates people's paths in life! My family's trek from past to present mirrors the route our country has navigated throughout these 150 years: a willingness to try something new and allow ourselves to be changed for the better; the bravery to bridge a great gap; the conviction that a more fulfilling life can be found beyond the horizon, where the sky touches the sea and the sea touches land, should we let ourselves lean on the promise of hope.