Our Lady of Guadalupe: through a Bishop's eyes 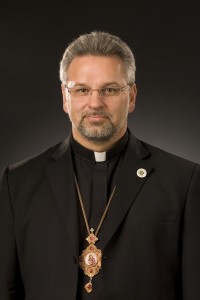 Bishop Bryan Bayda, (Ukranian) of Saskatoon
+Bayda: The first experience that I had was way back in the 70s when our family was vacationing in Texas. At the invitation of my Dad's cousin we changed plans and instead of hanging in Texas for two weeks we went to Mexico City, and that was the first encounter that I had with Our Lady's image, in the old basilica yet, not thinking much of it, though you know it was very important of course, but I was a ten year old kid! Little did I know she would be playing such an important role in my life today. PGM: How did this devotion develop? +Bayda: In 2009 I attended a congress in Arizona, and I learned a great deal more through the explanations of other experts, especially Monsignor Eduardo Chavez of Our Lady. What struck me was the similarities in the mode of evangelizing the we would find in our Eastern icons. The hieroglyphs that were present in her image, are pretty much a Gospel in themselves for the Natives. They would see her image, read the hieroglyphs that were so common to them. This is similar to icons that we have in the east, that have symbols. This was a fact that was very important to me and got me very, very interested.  My Second visit (to the shrine of Our Lady) was a personal pilgrimage daily over the period of one week as a bishop in January of 2011 while also visiting the many cultural, historical and anthropological venues in Mexico so as to better understand the impact of Our Lady's miraculous appearance and presence. PGM: We heard from Monsignor Chavez just yesterday about how Our Lady of Guadalupe is really the mother of all, and you seem to see that with even in the Ukrainian rite, in your experience. +Bayda: It's about inculturated evangelization. In the Ukraine, we were blessed that when the evangelizers, Saints Cyril and Methodius, who came from Greece, they didn't throw the baby out with the bathwater. We as a people had a long pagan history, but during that pagan history we developed many cultural festivals that were in tune with the seasons of the year. The developments of those feast, be they pagan, gave us very close attachment to the land. Since they were attentive to those things, Cyril and Methodius didn't annihilate them, they 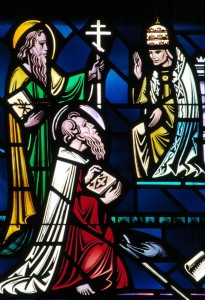 gave them life by giving them Christian significance. I think that's the beauty of the evangelization that my people and my nation have experienced and I've seen that highlighted so beautifully with Our Lady of Guadalupe, taking the culture, taking the significance that the people were close to already on a daily basis and giving it Christian significance. Saying “this is what it means now to give your heart, and your flesh, and your blood. You no longer can do this to the sun that orbits the earth, my son will give his flesh and blood for you know” and the native people in Mexico knew that this was sacrifice, they had a deep, deep sense of that PGM: Basically, one of the reasons so many people, especially native Mexicans converted to Christianity was because Our Lady spoke their language, she used things that had meaning for the locals. Can you give us an example? +Bayda: First, Her figure eclipses the astronomical sun and shows that at the centre of the entire cosmos, Her Divine and Human Son, the Son of the Father, is to be worshiped. This is one simple and very profound message. The second is the flower cluster or the ALTEPETL glyph which reflects three significant symbols. This first symbol of this single glyph represents a heart and arteries (since the indigenous worshiped the sun god with their live human sacrifices of hearts and blood). The people could now receive the blood and flesh of Her Son as Perfect Single Sacrifice. The second symbol is blossom with stem, buds and leaves, as well as a face, which is the symbol for wisdom and truth. For the Indians, in the same way that flowers and song were a metaphor for truth, the human heart and face taken together were a metaphor for the human individual. The third symbol is the Tepeyac hill, whose name is fact meant "hill of the nose" or "pointed hill". This civilization of the heart, then , far from showing itself as an abstract or indistinct concept, is linked to a real place with real peope, beginning symbolically at Tepeyac hill. PGM: The fact that she asked for a shrine to be built at that site was powerful message? +Bayda: Yes. The significance of a temple built at the foot of a hill near water symbolized wisdom, civilization and a future of hope. PGM: Getting back to the New Evangelization, using Our Lady of Guadalupe as a model,  we’re in the year of faith, how should we move forward with this idea of inculturation of evangelization? +Bayda: We are called to see how God has evangelized ourselves, each of us personally. Take stock of that, do a little inventory in your own personal life. Who was it that brought the Christian message to you and how were they sensitive to who you were, how old you were, where you living, who your family was, etc. In some cases it may have been insensitive, and we can still learn from that and say, “this is how it could have been in my life”, how can I learn from that and be a better Evangelizer? If it was done well, we can give thanks, and go forward knowing God is everywhere present and filling all things, and from there say Christ is the fulfillment of that. It all has to be Christo-centric as Our Lady of Guadalupe shows us. This is the most important start, to encounter Christ, remember how you encountered him first yourself, and opening yourself to him, allowing him to direct you to be attentive to how God has been present in another person’s life, to whom you have been sent to Evangelize. It’s not a watering down of the Gospel, it’s an opening up and a discovery of the Holy Spirit present in all places and all things. The Ecclesia in America Congress is being held to mark the 15th anniversary of the release of the post-synodal exhortation of the same name. The congress is hosted by the Knights of Columbus, the Institute for Guadalupan Studies which also promoted the cause for canonization of Juan Diego, and the Pontifical Comission for Latin America. Catch Pedro's full interview with Bishop Bayda on SLHOUR this weekend. Find out more at saltandlighttv.org/radio --- CNS photo/Nancy Phelan Wiechec Photo of Saints Cyril and Methodius window CNS/Courtesy of Crosiers