On the eve of the canonization of Blessed Brother André Bessette, Salt + Light premiered the documentary God’s Doorkeeper: St. André of Montreal in Rome.  Father Thomas Rosica, CEO of Salt + Light welcomed an attentive audience of more than 150 people to the Maria Bambina Theatre for the screening.  There was an atmosphere of great enthusiasm! 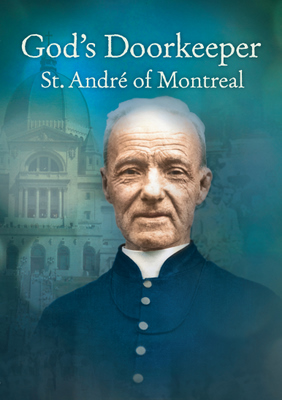 Among the guests: Cardinal Marc Ouellet, Prefect of the Congregation of Bishops; Cardinal Bernard Law, Archbishop Emeritus of Boston and Archpriest of the Basilica of Santa Maria Maggiore; Cardinal Renato Martino, President emeritus of the Pontifical Council of Justice and Peace; twelve Archbishops and Bishops from Canada, including the President of the Canadian Conference of Catholic Bishops; the newly elected Superior General of the Congregation of Holy Cross and his council; the American and Canadian Provincials of Holy Cross; the newly elected Superior General of the Oblates of Mary Immacualate and his council; the Deputy Supreme Knight of the Knights of Columbus and his wife, with a delegation of 25 Grand Knights and their wives from Quebec; the Lieutenant Governor of the Province of Quebec and his wife; Staff of the Canadian Embassy to the Holy See; Members of the Vatican Secretary of State; Members of the International Press corps accredited to the Vatican and Canadian media; and a large delegation of students from the University of Notre Dame in Indiana (Notre Dame is served by the Congregation of Holy Cross). The absolute silence that reigned from the beginning until the end of the documentary was at times interrupted by a few sighs of emotion and at other times sometimes brief laughter. The documentary received a standing ovation. However, it was only when I turned on the lights again in the room that I was swayed by the delighted looks through the dewy eyes of the audience. That's it, I thought! The documentary's message has touched the hearts of the audience. I felt Saint André smiling on us from the heavens! After the screening, Father Rosica thanked the audience on behalf of the entire team at Salt + Light, and also expressed his deep gratitude to all those who participated the success of the documentary.  The Holy Cross Fathers then congratulated Father Rosica and the entire team of Salt + Light for the many initiatives undertaken to make known to the world Canada’s first male saint and the first saint of the Congregation of Holy Cross. Indeed, the spiritual salt is made to give an authentic spiritual taste to the world and the divine light is made to illuminate hearts and fill them with hope. God’s Doorkeeper: St. André of Montreal, available in both English and French, is a captivating documentary to watch and re-watch several times, because it transports us into the world of Brother André through a sort of reactualization of his holy life. You come out of this movie transformed, entranced and overjoyed, and your heart swelling with hope. God’s Doorkeeper: St. André of Montreal has already created a big buzz here in Rome. Congratulations to the entire production team for this excellent documentary! Saint André Bessette, Saint Joseph, ora  pro nobis! To view the trailer or order your copy of God’s Doorkeeper: St. André of Montreal visit the Salt + Light online store.