Deacon-structing the Shroud of Turin: The facts 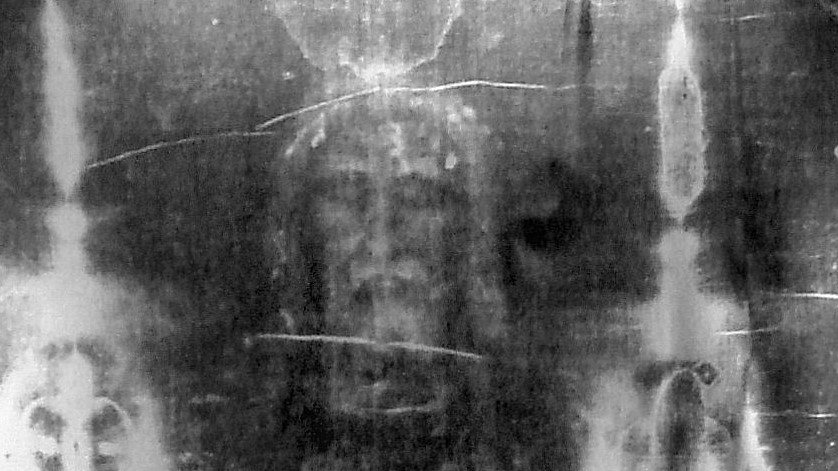 Detail of the face imprint on the Shroud of Turin (Source: Wikimedia Commons)
This week, on September 14, we celebrate the Feast of the Triumph of the Cross. I have written about the Cross several times before (here and here, for example). Today, as we reflect on the Cross, I want to focus on one of the most famous objects of popular piety in Christianity.

"And so Simon Peter also came, following him, and entered the tomb; and he saw the linen wrappings lying there, and the face-cloth which had been on His head, not lying with the linen wrappings, but rolled up in a place by itself." (John 20:6-7)

The Shroud of Turin The Shroud of Turin is a burial cloth measuring approximately 14 feet in length and 3 feet in width. In 1898, amateur photographer Secondo Pia took the first photograph of the shroud. The negative of the photograph clearly showed what many already believed through popular piety for centuries: There is an outline of a man embedded into the cloth. We may never know who this man was, but thanks to science, we are able to determine many facts about his cause of death. In 1978, the shroud was subjected to a series of nondestructive tests using some of the most highly sophisticated equipment available. These experiments rendered startling results: 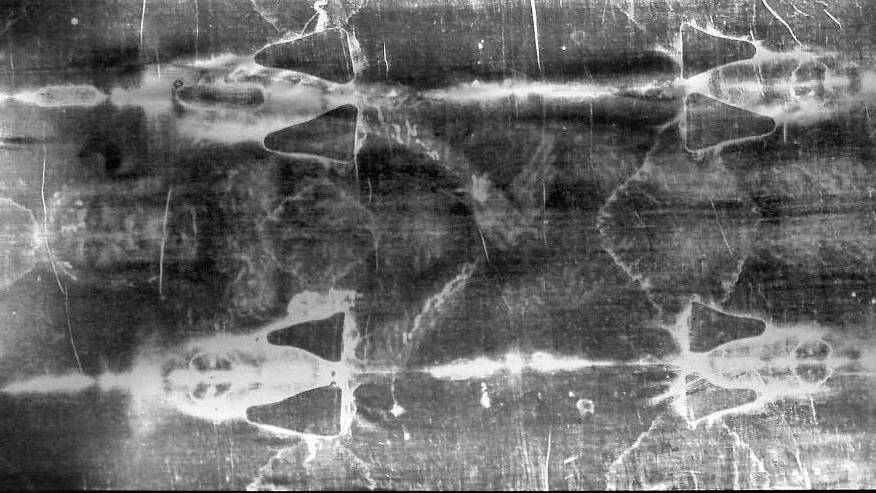 Negative of the front side of the Shroud of Turin (Source: Wikimedia Commons)
Blood samples Traces of human blood were found on the shroud. Tests have confirmed that this blood belonged to a human body at the time of death, as it was already coagulating on the skin. The blood is very dense, which is a common result of dehydration. Because of the amount of bilirubin found in the blood, it can also be concluded that the man had been beaten in the hours preceding his death. Blood samples taken from the cloth were found to be type AB. These samples also helped determine the DNA of the man of the shroud. Experts explain that the blood samples are so old and degraded that very few DNA segments were found, eliminating any possibility of cloning anything from the blood found on the cloth. Other DNA experts argue, however, that so much contamination exists on the shroud that no DNA test, no matter how carefully done, could ever be considered definitive. (If you want to read more about these tests, check out The DNA of God? by Dr. Leoncio Garza-Valdes.)   Flogging and carrying the cross On the chest, back, and the legs of the man, there are more than a hundred round markings, less than an inch large, which seem to have been caused by the tearing of the skin and by bleeding under the skin. These wounds occur in groups of two and three and seem to have been inflicted by flogging with a Roman flagrum, which was a wooden stick with many strings tipped with barbell-shaped balls of lead. The pathology of the image on the shroud also shows that the man had been beaten by two people, one on the right and one on the left. We also can deduce that the one on the right was the taller one. He was also more vicious, and unless he was beating with a backhanded blow, he was left-handed. Below both shoulder blades and above the right shoulder blade, there are large rectangular bruises attributed to the weight of a heavy and tough object, which might have been the horizontal beam of the cross that, sometimes, the convicted prisoners had to carry to the place of execution.   Nail marks On the frontal image of the shroud, the imprints left by the upper limbs are distinguished. The arms lie slightly turned outward from the elbow. The left hand lies over the right hand. On the left wrist a bloodstain can be seen. This stain was likely caused by two blood flows running up from the same wound on the wrist. This is explained by the two different positions assumed by men during crucifixion: supporting the weight on legs and feet and hanging on the wrists. Only four fingers of the hands are visible. According to Dr. Pierre Barbet in his book A Doctor at Calvary, the thumb is hidden in the palm by a contraction reflex, caused by a lesion of the median nerve in the wrist. Even though popular crucifixion art never shows the nail to have gone through the wrist, the shroud shows bloodstains on the arms that indicate that the blood flowed upwards from a square-shaped puncture wound on the wrist. It is believed that in crucifixion, nails were driven into this area since the structure of the hand could not support the full weight of a body. A crucified skeleton found near Jerusalem, which dates back to the first century AD, has been used to confirm this theory.   The legs Traces of soil mixed with blood were found on the knee and feet imprints. Soil samples were taken from the imprint of the right foot and matched to samples of limestone found in the Middle East. The imprint of the left leg looks shorter than the right one. This is caused by the fact that the left knee was fixed by rigor mortis in a position that is more bent than that of the right knee. (Rigor mortis is a condition that happens a few hours after a person or animal dies, where the skeletal muscles partially contract, causing the joints to stiffen and become locked in place. Depending on temperature and other conditions, rigor mortis lasts approximately 72 hours.) The feet are clearly visible in the posterior imprint, while on the anterior one, there is an evident bloodstain that does not allow us to distinguish the outline of the foot. The right sole is clearly imprinted while only the heel area of the left sole is visible. This suggests that the crucifixion took place using just one nail, driven through both feet that were laid one upon the other. On the right sole we can note the hole made by the nail that pierced the feet.   From these findings that I’ve shared with you, it is hard not to conclude that the Man of the Shroud was Jesus Christ. But there are more findings. Come back next week to read what they are. If you have any thoughts about the Shroud or have seen it, I’d love to hear from you. Write to me and share your stories.