Deacon-structing the Shroud of Turin: Who is the man? 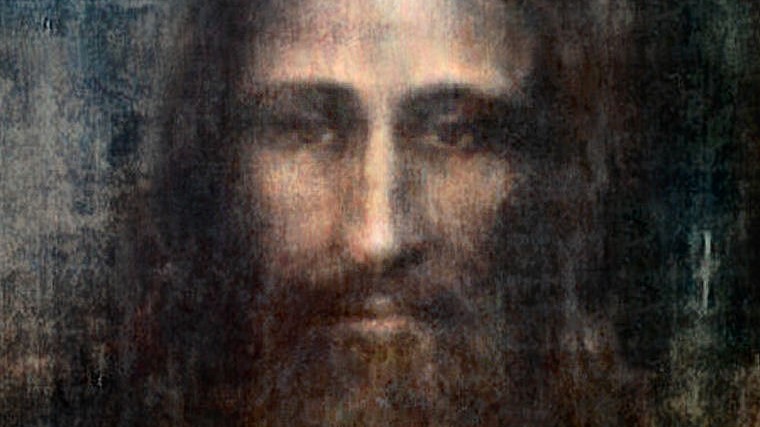 An artist's impression of the man of the Shroud of Turin (Image credit: Dianelos Georgoudis, shared via Wikimedia Commons; cropped and used under the terms of licence CC BY-SA 3.0)
Last week we began exploring some of the findings made after examining the Shroud of Turin. Is the man of the shroud Jesus? What more can we determine from studying the shroud?   The head and face It is clear that the man of the shroud was beaten before his death. Some swelling is visible on the face, especially on the right cheek. There are signs of lacerations and bruising, especially above the right eye. The nasal bridge is also deviated, possibly by a fracture. There are over 30 small puncture wounds on the scalp and numerous blood flows on the forehead, the nape of the neck, and along the hairline. These wounds go radially around the head and reach the top of the occipital bone (the one at the base of the skull). They appear to have been made by something looking more like a cap of thorns rather than a crown of thorns because the wounds are all over the head. In 1973, and again in 1978, Swiss criminologist Dr. Max Frei took particle samples from the shroud. Frei identified 58 different pollens, many of which established that the cloth had been in the Jerusalem area as well as parts of the Middle East which include Constantinople and Edessa. 50% of the grains of pollen found belong to the flower of Turnafort's gundelia (Gundelia tournefortii). This plant is a thorn that exists only in Israel, the Sinai Peninsula, and Jordan. Israeli botanists have confirmed that these pollens are not transferred from plant to plant by the wind but rather by bees. They conclude that the only explanation for the large quantity of pollen found on the shroud is that the cloth originated in Israel and that the pollens got there after direct contact with the cloth. What's more, in the forehead area there are allegedly imprints of this flower on the cloth. The gundelia flower blooms around March and April and it takes a day to bloom. The imprints show a flower that would have been picked around four in the afternoon, and its state of decomposition shows that it was picked about 30 hours before the imprint was made. Because the gundelia flower is a thorn and the imprint is found near the forehead, many people have concluded that this was in fact the plant that was used to fashion the crown of thorns.   Carbon-14 testing In 1988, a small sample of the shroud's linen fabric was tested using carbon-14 dating methods. The conclusions of the tests suggest that the linen was produced between AD 1260 and 1390. However in 1994, further experiments suggested that the fire of 1532, when the shroud was preserved at the Sainte Chapelle of Chambery in France, could have altered the carbon-14 testing results. The scientific community itself now questions both of these results, and more recent experimental studies have reopened the debate. On the shroud can be seen several triangular shapes. These are patches that were used to repair damage caused to the shroud during that fire of 1532. The patches are very visible because their fabric is different from the fabric of the shroud. During this fire, the shroud was also damaged by water. In fact, the seven rhomboidal areas that we can still see on the shroud are the few parts that remained dry. These imprints, as well as the burn damage can be seen repeated along the sheet because of the folding pattern. After the fire, the Poor Clare sisters at the monastery stitched the shroud on a piece of Holland cloth. 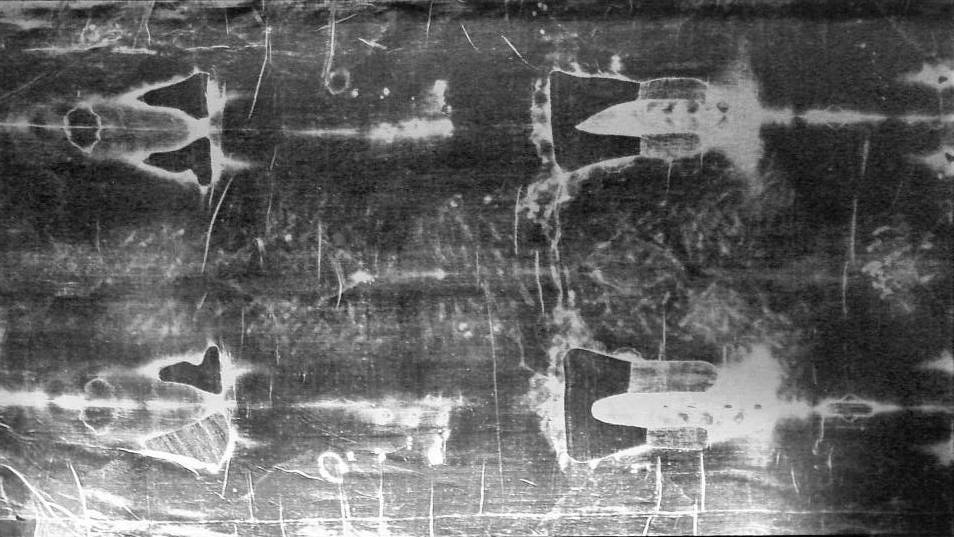 Negative of the back side of the Shroud of Turin (Source: Wikimedia Commons)
Turin? If this is the burial cloth of Jesus, how did it end up in Turin? There are records from the Crusade to Constantinople in the year 1204, indicating that there was in that city a picture of Jesus on a piece of cloth. It had been moved there from the city of Edessa in 944, where it had been discovered in the city walls in 544. Historians think that the Edessa Cloth is what we now call the Shroud of Turin. It is believed that the crusaders brought the shroud from Constantinople to France. It is known that in the 1350s the shroud was in Lirey, France. In 1453, it was given to Duke Louis of Savoy, and was taken with the ruling family when the capital of Savoy was transferred to Chambery, where it was housed in that chapel (where the fire took place in 1532). The shroud arrived in Turin in 1578, and it has been kept in Turin Cathedral ever since. Umberto II left the shroud to the pope in his will, and in 1983, it became the property of the Holy See.   Is it manmade? Many believe that the imprint on the cloth is manmade. Some believe Leonardo da Vinci painted it. But how could he have embedded the image on the cloth, since there is no trace of paint or any other liquid applied to the fibres? How could he have known about the wound on the wrist (see last week)? How did he know about negative photography? It is now an accepted view that the image on the shroud was not created by any man. The question still remains: What caused the image? In the image areas, the translucent fibres are a slightly deeper tinge of yellow as if the fibres in the image area are more degraded, or aged, than in the non-image areas. There is a hypothesis that the Shroud of Turin's image is the result of a very natural, complex chemical reaction resulting from the combination of ammonia derivatives emerging from a body and saccharides within a carbohydrate residue that covers the fibres of the shroud. Another more popular theory states that the image was transferred onto the cloth by some type of process where matter simply turned into energy – some type of particulate and parallel radiation. Scientists can determine that this radiation was focused by gravity because the image did not transfer itself onto the sides of the shroud. This is a process that has never been seen before.   Is the man of the shroud Jesus Christ? We can only conclude with certainty that the shroud image is that of a corpse of a man who was beaten and crucified. We also know that the body was taken out of the cloth without the cloth being unfolded. The answer to the question of how the image was produced or what produced the image remains, now, as it has in the past, a mystery. The Church does not officially say whether or not the man of the shroud was Jesus. But for those of us who believe in Christ, St. John Paul II said this during his visit to Turin in May 1998:

"The Shroud is a truly unique sign that points to Jesus, the true Word of the Father, and invites us to pattern our lives on the life of the One who gave himself for us."

If you have any thoughts about the Shroud of Turin, or any stories relating to the shroud, I'd love to hear from you. Write to me: pedro@slmedia.org.