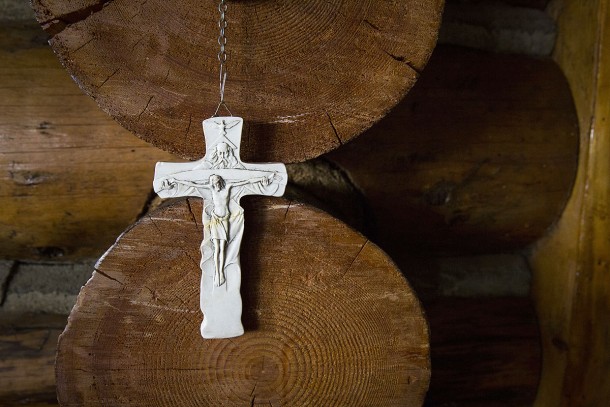 “Lift high the Cross, the love of Christ proclaim…” That’s a song we all know, but what does it mean? Why do we lift high the Cross? This coming Sunday is the feast of the Triumph of the Cross, also called the Exaltation of the Cross. Did you know that we celebrate this feast? Have you ever heard of St. Helena? She was the mother of Constantine. Recall that St. Constantine was the emperor who made Christianity the official religion of the whole Roman Empire in the 4th century. According to legend, St. Helena goes to Jerusalem and finds the true Cross – the actual cross on which Jesus died. Constantine had a church built over the site of the crucifixion; that’s where the Church of the Holy Sepulchre is today in the Old City of Jerusalem. The church was dedicated on September 13th in the year 335. The following day, September 14th, was decreed as the day when “all should celebrate the finding and exaltation of the Cross.” The word “exaltation” comes from the Latin exaltatio, which means “to elevate” or “to lift high.” But this same word is sometimes translated as “triumph”, as in “leap for joy”, and that’s why there are two names for the feast. I find it remarkable because it means that there is something about tomorrow that has to do with lifting high, but also with leaping for joy. But let’s go back to our initial question: why “leap for joy” about the Cross? Isn’t that a bit morbid? Yes, we honour the Cross because that’s a way of honouring Jesus. But if my dad was stabbed to death, would I honour him by wearing a knife around my neck? Probably not. But I do wear a cross around my neck. And in our house, in every room, there is a cross or crucifix hanging on the wall. And we make the sign of the cross – indeed, every prayer we say begins and ends with the sign of the cross. Our faith teaches that it’s good to have representations, because when we honour the image, we are honouring the person the image represents. We don’t worship the image. There’s a difference between true adoration (which we give only to God), and veneration or honouring (which we give to images). Similarly, if I honour my parents or others I respect, I am not worshiping them. So we worship Jesus, but we venerate the Cross. That’s one of the things I love about the Good Friday liturgy: we line up and come up to the front, and there’s a large cross that we are invited to venerate. Some people bow, some people touch it, some people even kiss it. This is something that has always moved me. Why do I come up and kiss the wood of the cross? Well, because without the Cross, there would be no Church. Without the Cross, there would be no Christianity. Without the Cross, there would be no Resurrection. Without the cross, there is no freedom and no salvation. It’s nice to talk about resurrection and all that happy stuff, but when Jesus said that a grain of wheat has to die in order to bear fruit (Jn 12:24), He wasn’t kidding. It’s true that out of death comes life and this is one of the key Mysteries of our faith: Jesus died so that we could live. Isn’t this what we profess every time we say the Nicene Creed? For us men and for our salvation, “He came down from heaven; He suffered, died and was buried.” He did this for our salvation. And that’s what Jesus is talking about when He says to Nicodemus that “God so loved the world that He gave His only Son, so that everyone who believes in Him may not perish but may have eternal life.” (Jn 3:16) Jesus came so the world might be saved. (Jn 3:17) Come back next week to find out more about the Cross.