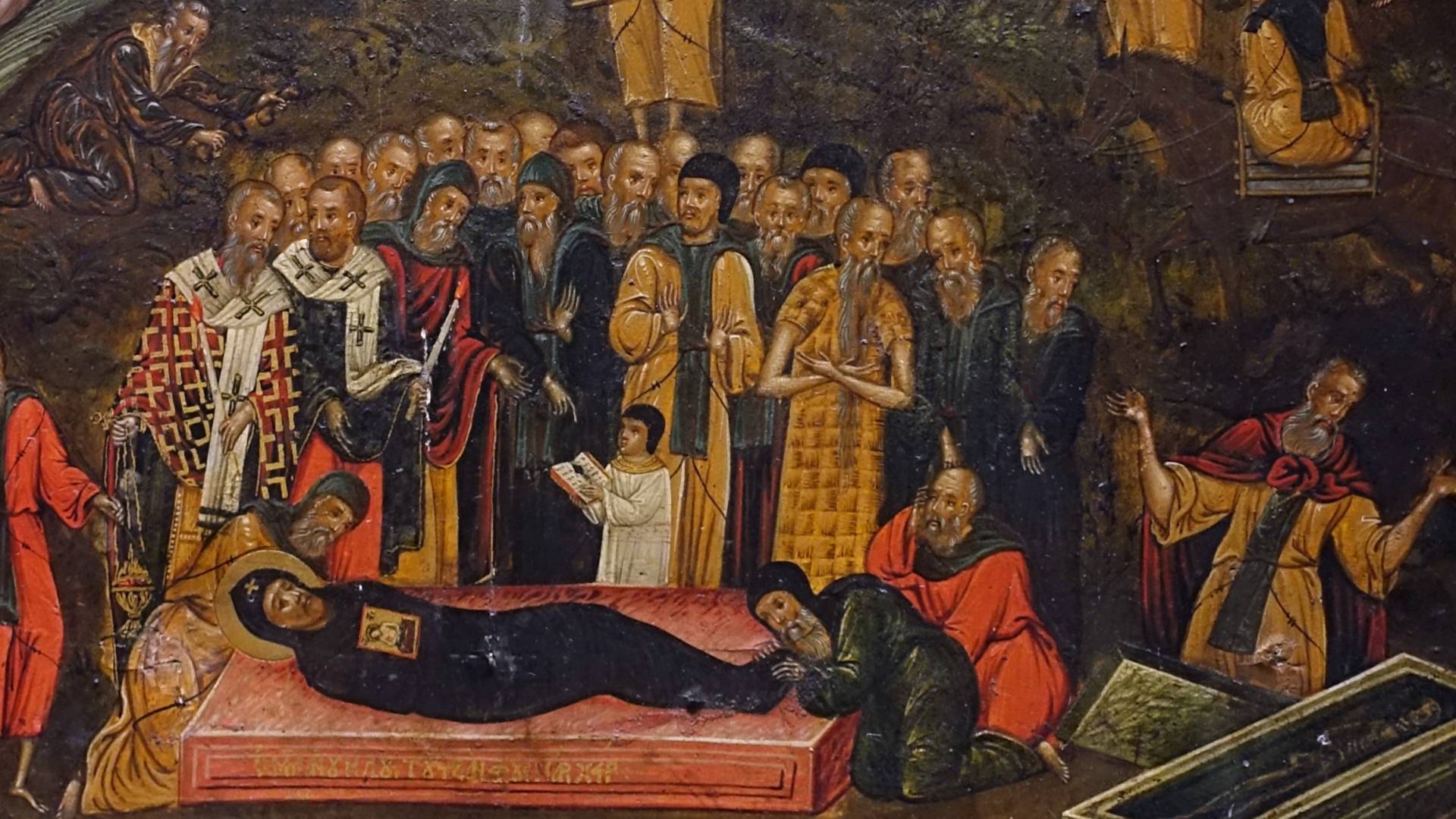 Detail of Death of Ephrem the Syrian by Emanuele Zanfurnari (Source: Wikimedia Commons)
For the last couple of weeks, we’ve been looking at our Church Fathers. Three weeks ago, we learned about the Apostolic Fathers, so named because they learned the faith from the apostles; two weeks ago, we learned about the Eastern Fathers, who wrote in Greek; and last week, we learned about the Western Fathers, who wrote in Latin. Today we will learn about the Syriac Fathers. They wrote in Syriac and came from or lived in the region of Mesopotamia, where Syria, Iraq, and Iran are in the present day. Aphrahat (or Aphraates) (c. 270–c. 345) is considered the first Syriac Father. He was a Persian convert to Christianity who took the name Jacob at his baptism, a name that some of his writings are sometimes attributed to (not to be confused with Jacob of Nisibis, though). His twenty-three “homilies”, sometimes referred to as the Demonstrations, are pastoral in nature and deal with various topics of faith and practice. Aphrahat exhorts against the conversion (or return) to Judaism, deals with apocalyptic themes, and uses biblical commentaries to explain many of his teachings. He writes about charity, fasting, prayer, penitence, humility, preaching, persecution, and virginity, as well as about the resurrection, Jesus as Messiah, and the last days. Most of his works have been translated into Latin and Greek, as well as into Armenian and Arabic, although those are sometimes mistakenly attributed to either Jacob of Nisibis or Ephrem the Syrian. Isaac of Antioch (451–452), sometimes confused with Isaac of Nineveh (and an Isaac of Edessa), lived in Edessa, in present-day Syria. He was likely a priest and is considered one of the great writers of Syriac literature for his homilies, written in verse. Perhaps the most well-known of these is the “Memra on the Parrot” in which Isaac expresses the theology behind one of the most ancient Eastern prayers, the Trisagion (“Holy God, Holy Mighty, Holy Immortal, have mercy on us”), and also of the Cross and the Eucharist. Isaac of Nineveh (c. 613–c. 700) is also known as Isaac the Syrian (Mar Isaac). He was born on the shores of the Persian Gulf and was an ascetic monk who became Bishop of Nineveh, in present-day northern Iraq. He wrote many homilies on the inner life and is venerated across many Christian traditions, likely because he avoided writing on topics that were disputed. He writes about the Holy Spirit, faith, providence, obedience, love, mercy, and prayer. The last Syriac Father is Ephrem the Syrian, who is also considered a Doctor of the Church. You can read about him in Deacon-structing Doctors of the Church part 4. Other lists of Syriac Fathers include Jacob of Serugh, who also wrote several “memres”, Jacob (or James) of Edessa, who produced a revision of the Bible, and Maron, after whom the Maronite Church is named. Though venerated in the Latin Church, they have not been as influential to Western Christianity as the others. Come back next week so we can look at our Desert Fathers (and mother).