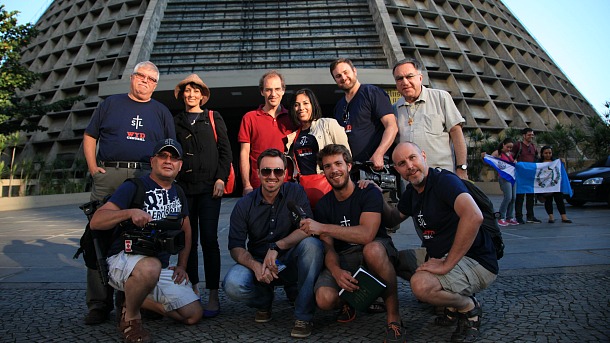 I have never experienced World Youth Day as a pilgrim, and yet I’m a huge fan of the event. In 2008 I had just joined Salt + Light (filling in for a colleague who had decided to volunteer for WYD Sydney)  and was part of the team in Toronto that helped get our Sydney team’s stories on air. In 2011 I worked for the WYD Madrid organizing committee, coordinating the English language content for the website. I have been accused of encouraging pilgrims to walk to Cuatro Vientos because of the “travel guide” videos I shot showing off the walking pilgrimage route. I shot the videos in the spring when the walking route looked like a cool, verdant path for strolling to the site of the closing vigil and Mass. In mid-August no park could provide respite from the 47 degree celsius weather (about 116 degrees fahrenheit). The whole experience of working for and living in Madrid was life changing in many ways. I returned to Toronto with new friends scattered around the world, linked by what we had experienced in the months of preparation for WYD. In 2013 I was part of the S+L team that travelled to Rio de Janeiro to cover the first WYD with Pope Francis. The most touching moment for me was seeing one of my Argentine colleagues from WYD Madrid who was part of the WYD Rio organizing committee. She was part of the small group that greeted Pope Francis when he landed at the helipad just behind the media center. As the pope stepped off the helicopter and reached out to shake hands, she introduced herself and launched herself into a bear hug with “her” pope. Kleenex was a big commodity that week. This time around I will be anchoring S+L’s live coverage of World Youth Day Krakow main events. I will also be producing a daily half hour program recapping the day’s events and bringing you the unique WYD stories only our S+L team in Krakow can bring. It will also be a bittersweet experience as it will be my last WYD with S+L. In the fall I will be moving on to new adventures in western Canada, away from Salt + Light. I expect this WYD to be full of moving, “once in a lifetime” moments not only for pilgrims, but also for our crew in Krakow and Toronto.