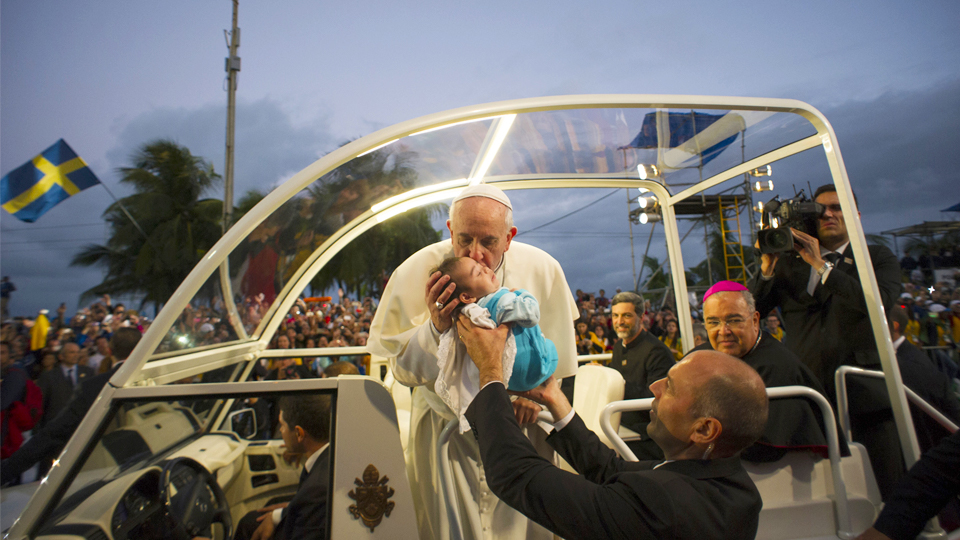 A multitude that could not be counted...

That was the scene last night as we walked from the media center back to our hotel. Authorities estimate the crowd at 3 million, the largest crowd ever at Copacabana beach, surpassing the annual new year celebration. All good, except for the fact that 3 million need a place to sleep and washrooms and food. But last night was not about numbers. It was about hearts. 3 million hearts (and many more through media) joined Pope Francis in adoration. We joined in one voice confirming our commitment to being disciples and missionaries. Being a missionary means going out to help those in need. It's hard not to see those in need in this city of Rio de Janeiro. With that in mind, a grassroots initiative began inviting pilgrims to leave their sleeping bags with a homeless person. All they have to do is give it with someone who looks like they could use one. There are many homeless in Rio. I thought this is a great way to give; To be disciples and missionaries and to put into visible practice what Pope Francis is so comfortable doing; making disciples of all nations, and using words only if necessary. And last night, without words, we were reminded of the story of St Francis who was called to rebuild the Church. Our present-day Francis reminded us how to do that: Being at the service of the Church, loving her and working to make Christ shine more brightly in her. This Vigil was originally planned to take place at a different place, the field of Guaratiba, renamed, "Campus Fidei" or field of faith. But that field is flooded because of the rains and so a decision was made to move the final two events of WYD RIO 2013 to Copacabana beach. Another reminder that we need to be open to being surprised by God. A reminder also that the field of faith is not a geographical place, but a place within. Starting from this idea of "field" Pope Francis inspired us all by giving us three (as he often does) images of what it means to be disciples and missionaries: "First, a field is a place for sowing, a field is a training ground and a field is a construction site." He told us about being good soil. Then he urged us to be "athletes of Christ." He said, "Jesus offers us something bigger than the World Cup! He offers us the possibility of a fulfilled and fruitful life." And in order to win the prize, we have to train. How do we train? Through prayer, the Sacraments and loving the other. In a style unusual of a prepared speech he made everyone repeat those three, just to be sure we remembered it. He challenged us, "you won't forget them tomorrow, will you?" All responded, "no!" Lastly, teaching how we are to be builders and construction workers, he said in Spanish and using Argentinian slang, "No balconeen la vida" meaning, don't stay up in the balcony; "sean protagonistas," be protagonists. we have to be active participants. We have to be agents of change. We mustn't be happy merely letting others be the protagonists of change. And how do we build the Church? Quoting Bl. Mother Teresa, he said that what needs to change in the Church is you and me. He closed by saying, "never forget that you are a field of faith! You are Christ's athletes! You are called to build a more beautiful Church and a better world." I had read that the organizers of the Vigil wanted the evening to be one of prayer, but also one that made us think. I think they succeeded. Last night's Vigil touched every part of my being: My mind, my heart, and my soul. And for me, one the most moving moments was during a testimony by a young man in a wheelchair, who'd suffered an accident, who urged us to look to the Cross. He told us to take out the cross from our pilgrim bags and lift them up. Lift up your cross. This is the cross that strengthens us, that gives us hope, that carries us. As we become sowers, athletes, and builders, we journey under that Cross. And under that same Cross, we all joined Pope Francis in adoration. The Blessed Sacrament was exposed and 3 million knelt in silent adoration. Musicians, Matt Maher, Martin Valverde, Guilherme and Eugenio, each, as they led us in quiet worship songs, also knelt. God was indeed worshipped on Copacabana Beach last night. Walking back to the hotel at 11 pm I realized that I still had Evening Prayer to do. I decided to make that walk, through the sea of sleeping bags and pilgrims, my evening prayer. We adore you, oh Christ and we bless you, for you have called us to follow you and you make us collaborators in your work. It was at that moment that I saw, among the pilgrims in their sleeping bags, a homeless man. He had no sleeping bag, yet was nestled in between dozens of pilgrims. Tonight, he was sharing his field. He was allowing us to participate with him in training. Tonight he was helping us build the Church. He did not need us to give him a sleeping bag. He was sharing his bed with us. Another reminder that we need to be surprised by God. God was indeed worshipped on Copacabana Beach last night. 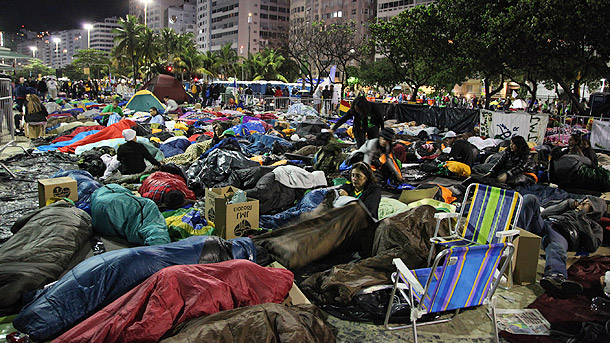