Where the Shepherds kept watch - #SLPilgrimage

Update: The video reflection was completed! Check it out above:
Some of the Salt + Light team are in the Holy Land on pilgrimage. We are also preparing something special for you to watch in the near future. Stay tuned! In the meantime, here is the text of a reflection that was recorded at the Shepherd's Field in Bethlehem:

The Shepherd’s fields lay in the Judean countryside about two miles east of Bethlehem.  It’s here that tradition says the very first public proclamation of the birth of Jesus took place.
Now there were Shepherds in that region living in the fields and keeping the night watch over their flock.  The angel of the Lord appeared to them and the glory of the Lord shone around them, and they were struck with great fear.  The angel said to them, “Do not be afraid; for behold, I proclaim to you good news of great joy that will be for all the people.  For today in the city of David a savior has been born for you who is the Messiah and Lord.
Luke 2:8-11
The story of the annunciation to the Shepherds is unique to Luke’s gospel.  Since it is the first public proclamation of Jesus’ birth, we have to assume that this scene of the angel visiting the shepherds is a key part of the Christmas story for Luke.
The word angelos means “messenger”.  In the Scriptures, angels are important characters who communicate a divine message to human beings.  But apart from the message they bring—which is extraordinary in itself—the visit of an angel always points to the importance of the person receiving the message.  In fact, the only other characters in Luke’s narrative who are visited by an angel are Zechariah, John the Baptist’s father, and Mary, the mother of Jesus.
While shepherd figures and imagery are prominent in the Judeo-Christian tradition, shepherds in Jesus’ time were not the most highly respectable people.  Nomadic in lifestyle, it wasn’t uncommon for shepherds to herd their flocks through other people’s private land.  And so, they were looked upon with suspicion and considered to be dishonest; they were excluded from testifying in the courts; they were physically and ritually unclean, living on the margins of a Jewish society that centered on devout religious practice in the Jerusalem Temple.  Based on all of this, we have to assume that Luke the Evangelist was aware of the reputation of shepherds…
And suddenly there was a multitude of the heavenly host with the angel, praising God and saying: “Glory to God in the highest and on earth peace to those on whom his favor rests.”
Luke 2:13-14 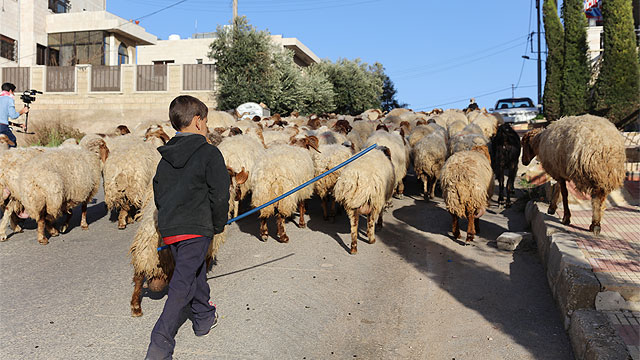 Why does Luke relate this story of preferential treatment to the lowly shepherds?  Who were they to receive such a gift of good news from God?  What was Luke trying to communicate to us, the readers of his gospel?
We can better understand this preferential treatment of the shepherds if we look at Jesus.  He spent his adult life with people on the margins: sinners, tax collectors and prostitutes.  Over and over again he was looked upon with suspicion and contempt because of the people he associated himself with.  Even in birth, Jesus, the Messiah and Lord, was associated with the poor, being born to an ordinary family in a manger among animals.  In his exhortation The Joy of the Gospel, Pope Francis writes that “God’s heart has a special place for the poor, so much so that he himself became poor.”  Luke tells the astonishing story of the angel announcing the good news of Jesus’ birth to shepherds, precisely because God favors the poor and the marginalized.
When the angels went away from them to heaven, the shepherds said to one another, “Let us go to Bethlehem to see this thing that has taken place, which the Lord has made known to us.”  So they went with haste and found Mary and Joseph, and the infant laying in a manger.
Luke 2:15-16
Luke tells us that the Shepherds left the Holy Family glorifying and praising God for what they had heard and seen; we never hear from them again.  These fascinating characters help to kick-start the story of Jesus in a profound way, telling us that from the very beginning, Jesus holds a privileged place for the poor and marginalized.  Standing here in the Shepherd’s fields—such an ordinary place—we come face-to-face with this truth.  Here, a defining attribute of God is revealed.  He sees the exceptional in the oddest and most unexpected places.  Can we do the same?  Can we give a privileged place to the poor and marginalized people in our lives, and our society? The story of the Shepherds reminds us that salvation history unfolds through the lives of ordinary, simple and unsavory folks, and that God can is able to write straight with crooked lines.

--
Sebastian Gomes is an English producer for Salt + Light.