It's been a horrible week at the Vatican, and it's only Tuesday. Last week, German bishops addressed claims that youth had been sexually abused by clergy in various Catholic schools. News surfaced that boys had been abused at an institution in Regensburg where Msgr. Georg Ratzinger, the Pope's brother, had later been choirmaster. Press reports alleged that the Catholic Church in Germany had tried to block official investigations into other abuse claims, though the country's Chancellor Angela Merkel countered that the German Church has taken allegations very seriously. Then on Monday evening, Vatican Radio reported that the bishops of Holland were meeting to discuss allegations of abuse in that country. Clergy sexual abuse has been a long nightmare for the North American church, but this week proves that some problems, sadly, are international. 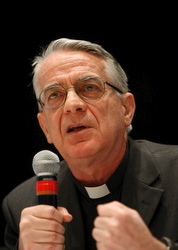 Vatican Spokesperson Fr. Federico Lombardi, SJ spoke to Vatican Radio about the new allegations. He said the institutions involved have reacted to the claims quickly and decisively. The Regensburg Domspatzen School, where Msgr. Ratzinger taught, posted a notice on their website saying they were looking for an individual who told German newspapers he had suffered abuse at the school in the early 1960s (again, before Msgr. Ratzinger served there). Fr. Lombardi said that sexual abuse has always been considered a grave offense by canon law and cited the 2001 document "De delictis gravioribus" ("On more serious crimes") written by then-Cardinal Joseph Ratzinger. (The document has been blamed by some for promoting a culture of silence surrounding sexual abuse.) Fr. Lombardi concluded by saying there is no denying the seriousness of what the Church is experiencing at this moment, and everything must be done to ensure that, out of this tragedy, the Church finds a better way to protect children and youth. Read Fr. Lombardi's statement, released today. More information is also available in this report from Catholic News Service. - Photo: CNS photo/Nancy Wiechec