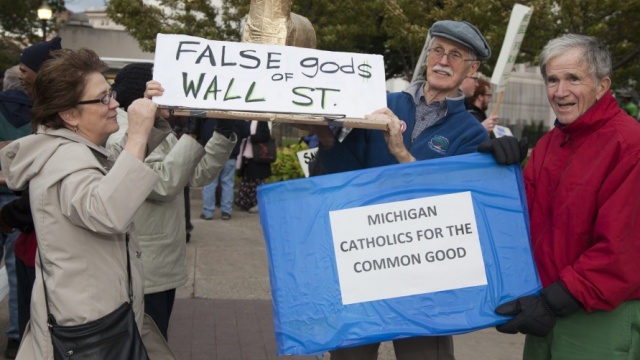 The  Church could play a significant role in tackling youth unemployment in Europe, according to a noted banker and economist. Mohammad Yunnus, known for establishing the micro-credit Grameen Bank in Bangladesh, made the suggestion at a conference hosted by the Pontifical Council for Justice and Peace. The conference, called The Global Common Good: Towards a More Inclusive Economy" brought together economists and bankers from around the world. Yunnus said the current economic system "is comparable to a machine that feeds itself continually sucking the lifeblood from the wide base of humanity to transport it up high towards a restricted elite." He said moral responsibility has no space in a company's annual financial report, and Economics schools don't tackle such issues with their students. While charity is a worthy concept, it is an unsustainable model according to Yunnus. Instead a new model is needed that is a mix between the for-profit business model and the charity model. In this alternate business model money "does its job, and comes back [into the business] and can be re-used infinately through independent businesses that are self sustaining." The current economic system is also "an insult to the human being" and the current level of youth unemployment, which seems to have been accepted "as if it was predestined by God...do we not insult God by accepting this destiny?" He said special funds for social enterprises have been created in Bangladesh specifically for unemployed young people, who are now reaping the rewards of this type of support.  He said the same approach could be used in Europe.  "The Church could easily create funds for social enterprises with the aim of solving the problem of youth unemployment in Europe." The creation of funds for social business enterprises would mean more options for helping people in need, and less likelihood those people would remain dependent on assistance. Yunnus was one of 65 participating in the conference, including Bank of England Chancellor Mark Carney, US Economist Jeffrey Sachs, World Bank director Bertrand Badre, and Oxfam International Director Winnie Byanyima.