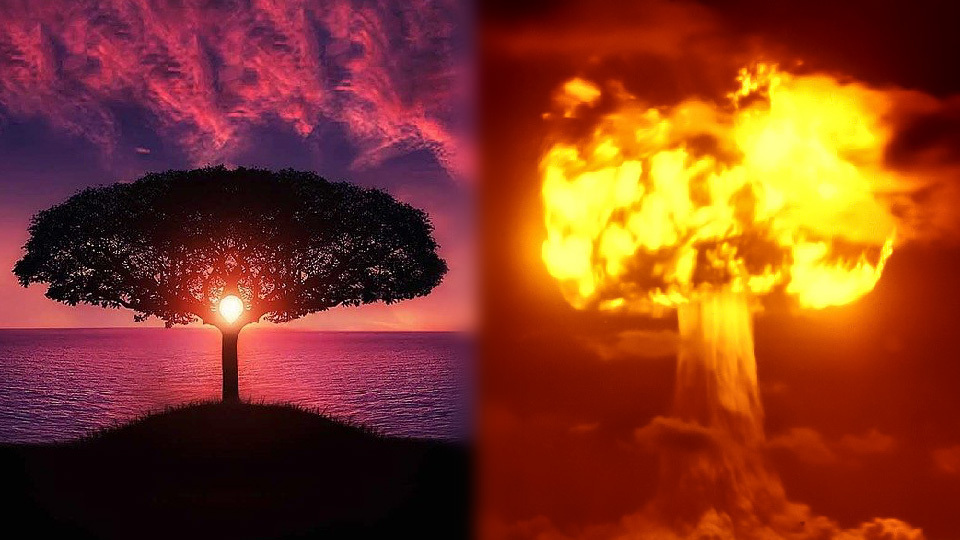 Image credits: Sohee Park/Bessi/USA
Last week, I discussed the utopia-dystopia nexus by reviewing Lord of the World, a dystopian fantasy novel by Catholic priest Robert Hugh Benson. This week I would like to take a broader look at this issue and its ramifications in our culture.   From utopia... To do so, it will be helpful for us to take a quick look at the concept of utopia and its meaning. The term "utopia" was coined by St. Thomas More, a prominent English jurist and politician who was martyred for refusing to acquiesce to the schismatic enterprise of King Henry VIII. St. Thomas More used it to title a book in which he presents a supposedly ideal society, the best possible form of political community. Etymologically, it means something like "from nowhere", or "in no place". More's approach, sometimes compared to Plato's in the Republic, is complex, and his motivations for writing this work have been the subject of many interpretations. Generally speaking, utopia as a literary genre is the intellectual approach aiming for the description of an ideal society, freed from the weight of human vicissitudes. Utopias are often articulated around ideals like equality, justice, and fraternity. At the same time, this word takes on the meaning of a vision impossible to realize in reality, of an imaginary proposal. As the modern project advanced, in a society marked by growing confidence in the human capacities to order the world, utopias mixed in with political ideologies, of which some, as utopian socialism, aimed for the construction here on Earth of the ideal society. Dramatic historical experiences like the French Revolution and the October Revolution of 1917 in Russia were motivated by these types of ambition. One could even say that the great ideologies of the 20th century – fascism, communism, and liberalism – are each characterized by a particular utopian inclination. The experience of this century of violence and the evidence of the failure of the utopian enterprises of far-right and far-left alike broke the mould of the political utopia, leading, for some, to the end of the ideologies.   ...to dystopia We cannot speak of utopia as a literary genre without speaking of dystopia, its counterpart, its opposite term, whose etymology essentially means "bad place". The dystopian genre has had an extraordinary fortune in the 20th century. We have previously discussed some of the great titles of the genre: 1984 (Orwell) and Brave New World (Huxley), or Fahrenheit 451 (Bradbury). The contemporary proliferation of dystopian books, films, and television series is certainly a sign of a society marked by anxiety. Just like the proper object of each utopia points in some way to the idol to which it refers, the particular object of each dystopia is indicative of the anxieties of the spirit of the age. In this way, we have witnessed a transition. Before the tragedy of the great world conflicts, we lived in a time marked by a certain optimism with regard to the potentialities of man alone, exemplified in particular by a glorification of experimental science and positive knowledge. It is precisely this excess of optimism that leads us to the worst experiences of human history, and in this respect Benson's perspective on the threat of a secular humanism appears quite prophetic. While the utopian disposition does not have the credibility that it enjoyed more spontaneously in another era, it must be noted that it has manifested itself in waves at certain moments in our recent history. Even though the great ecological, economic, and sanitary crises that we are currently experiencing can lead us to an excess of pessimism, the characteristic futurism of the 1960s and the singular military triumphalism of the 1990s (as they were experienced in the West) are not far behind us.   Christian hope: neither optimism nor pessimism Behind the utopia-dystopia nexus – in most of its representations focused on human achievements – lie precisely the excesses of optimism and/or pessimism which the Christian, moved by theological hope, must know how to avoid. The Christian tradition distinguishes itself, in fact, by a certain number of characteristics that should prevent us from falling into such excesses. On the one hand, Catholic anthropology is characterized by a certain pessimism: men are sinners, and it is grace that saves us. On the other hand, Christian eschatology, which is related to the theological virtue of hope, contains the promise of a renewed Creation, of a new City, of a heavenly Jerusalem where men will live in full communion with God, the culmination of a decisive victory already won by His Christ. In a sense, Catholic anthropology forbids us to entertain utopian goals: Paradise is not of this world; men are generally weak; political life, even if it is a necessity and pursues a certain good, cannot respond alone to all the crises (ecological, migratory, health, economic) that shock the conscience of believers. The Church's social doctrine is certainly not fatalistic, but it is at its best inhabited by a realism that we must not forget. It is not uncommon in our time, however, for various reasons that have to do with the profound spiritual changes affecting our Western societies, to hear in some Christian circles an excessively catastrophic tone or the use of a radically dystopian language. While some things are not going as well as we might wish, in many ways, these sometimes shocking imperfections should not let us turn away from eschatological hope. The history of Christendom is full of twists and turns, but we must never forget that it is a story with a happy ending.   Further resources For readers who may be interested in delving deeper into the utopia-dystopia nexus, I offer some examples of books, films, and television series that have influenced popular culture, dealing in various ways with the themes of utopia and dystopia. Many of these works, which sometimes deal with shocking themes, do not themselves reflect a Christian outlook on reality.   Utopia   Dystopia