U.S. pilgrim has 'no regret' for making Montreal pilgrimage

MONTREAL — The live broadcast of the canonization Mass for Br. André October 17 and the vigil held the night before drew several thousand people to St. Joseph’s Oratory. Some came to participate in a major historic event; others came to pay tribute to their close ties to the saint. 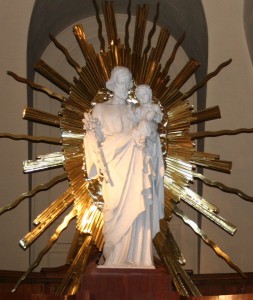 Judith Boyce arrived at the oratory just in time for the 4 am Mass to be part of this “huge moment for Quebec.” The Montrealer said she had a deep admiration for Br. André since her childhood. “I think it’s because he was humble, perseverant and simple,” she explained. Stella Park joined the overnight vigil at 12:30 am. “I didn’t expect this crowd,” she said. About 1,000 people were in the midst of Eucharistic adoration at the time. “To see all of these people with their strong faith, it helps me to renew mine.” Park admitted to being very tired. “But I will hang in for the Mass,” said the parishioner of Montreal’s Korean Martyrs Parish. “It’s a once-in-a-lifetime experience to have someone from (your city) be canonized. I’m so happy. It’s so moving.” Deanna St. Onge came from California, with their four children and six grandchildren, to participate in events at the oratory over the canonization weekend. St. Onge, who has a photo of her Montreal-born mother and grandmother with Br. André, is a distant relative of the new saint. “He’s my great, great, great uncle,” she said. And the St. Onges make it a point to celebrate this family link every year around the liturgical feast day that was established at the time of Br. André’s beatification, January 6. “We have a family Mass and then we have a party,” she said. Between 50 and 100 people attend every year. The pilgrimage to St. Joseph’s Oratory for the canonization was moving for St. Onge, even though she was one of several hundred people who were refused entry into the overflowing crypt church due to security reasons. Oratory staff did manage to have her and her husband enter the crypt for about 15 minutes, just enough time to take a photo and take in the ambiance. It was enough to move St. Onge to tears. “I will never regret having made this trip,” she told Oratory staff. - Photo: Laura Ieraci, The statue of St. Joseph and the Child Jesus is the crypt church of St. Joseph's Oratory.