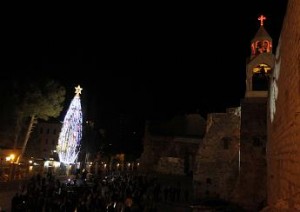 A year ago I visited Bethlehem, where residents can claim to celebrate Christmas every day. For those who have never traveled to the region, the city holds a number of surprises.
For one, Bethlehem's Church of the Nativity (believed to be the place where Jesus was born) and the Holy Sepulchre in Jerusalem (containing the sites of both his death and resurrection) stand a mere 8 km apart. The route is not direct, however, and Hebron Road, connecting the two cities, is interrupted by the West Bank separation barrier, also known as the Israeli security fence. During my six weeks in the Holy Land, I passed through the checkpoint from Jerusalem to Bethlehem with minimal delays, though the reverse trip could take considerably longer depending on the number of vehicles awaiting security checks. The economic disparity between the two sides is immediately visible. Most areas of Jerusalem look clean and modern, while many unfinished structures in Bethlehem appear to have stalled mid-construction. A period of intensified Israeli-Palestinian fighting, known as the Second Intifada, significantly damaged the economy and frightened prospective tourists. As a result, 45% of Bethlehem residents were unemployed in 2005. According to this report by the Franciscan Media Centre (provided by H2onews), the situation is improving in Bethlehem for two principal reasons: a "resurgent economy" in the West Bank and an "increase in religious sentiment" brought about by the Synod of Bishops on the Middle East, which convened in the Vatican this past October. Incidentally, the first person interviewed in the video, Fr. Stephane Milovitch ofm, was one of the many priests who assisted us when we filmed the S+L documentary Within Your Gates. One morning, the Franciscan friar welcomed us into Jerusalem's St. Saviour Church well before dawn so that we could film a sunrise over the Old City.