This week on Perspectives: Which gift would you bring Him?

Whether we like it or not, gift-giving has become characteristic of how we celebrate Christmas. When someone asks us “are you ready for Christmas?”, we automatically translate this to “do you have all of your shopping done?” 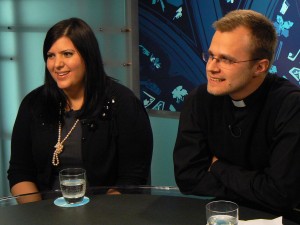 Somehow, the message behind giving a gift has been lost in the exchange; the language has been distorted and the motives darkened. What is supposed to be a heartfelt gesture of appreciation and thanks has become a mere succumbing to a nagging feeling of obligation. In his best-selling book “The Five Love Languages”, author Gary Chapman presents readers with 5 “languages” through which different individuals choose to give and receive love. The five love languages are the following: words of affirmation, quality time, acts of service, physical touch and, the most meaningful -for the purposes of this episode: gift-giving. Gift-giving really is a language but we often neglect its rich vocabulary. Its practice then becomes cold, lifeless and perhaps the worst of all, necessary. When gifts no longer issue forth freely and in response to gratitude and love, they say nothing. So how can we revive the practice of gift-giving? How can we make the exchange of gifts meaningful again? Well, we can start by calling to mind the greatest gifts we have received. For many of us, the greatest gift is decidedly the gift of Faith. At Christmas time, that gift is embodied in a small Child. If you would have been in Bethlehem on that night, what would you have brought to Him? How would you show your thanks to the Christ-child, the Gift of all Gifts? An open heart? A comfortable crib? A deer skin? All of these were some of your responses. But what about you? Which gift would you bring Him? For this episode, we have assembled a panel of “gift-giving” Perspectives fans: Deacon Paul Hrynczyszyn of the Diocese of Hamilton, Stefanie Romano, a teacher candidate with the York Catholic District School Board and Todd Doucette, the youth coordinator at St. Ambrose Cathedral in Yarmouth, Nova Scotia. Tonight, be sure to join host Pedro Guevara Mann and the “gift-giving panel” as they reflect upon the season of giving and upon the One who came to us as the Greatest Gift of all. That’s the Perspectives Weekly Christmas episode-tonight at 7pm and 11pm ET, 8pm PT.