Today our hearts are bursting, such is the gift of love

"Today our hearts are bursting, such is the gift of love."
Those are the words Jim and Carol Collier used to express their emotions at their son's funeral. Sapper Brian Collier was killed last week in Afghanistan by an improvised explosive device. His funeral was held yesterday at Holy Martyrs of Japan parish in Bradford, Ontario, the Collier's hometown. 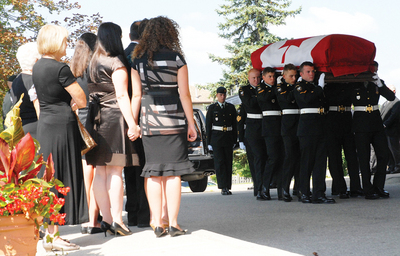 Members of the 1 Combat Engineer Regiment based in Edmonton, Alberta carried Collier's casket into the church, while members of the 2 Combat Engineer Regiment from CFB Petawawa stood guard outside. More than one soldier was visibly shaking from the effort of trying to contain his emotions whiling standing at attention. In his homily, Fr. Boniface Perri, the pastor of Holy Martyrs of Japan Parish, said, "If the value of a man is how many people will remember him well, and how many people he touched and loved, and how many people loved him back, then look around...Brian was sucessful in every sense of the word." He told the gathered mourners that a funeral is not a ceremony where the surviving relatives and friends simply promise to remember the deceased and keep his or her memory alive. Instead, a funeral is a recognition that, for the faithful, death is not an end, but a change in life. "Thus whenever our thoughts and prayers go to him, we will be with Brian. No, he is not gone but moved far away." "This moment is heartbreaking, but it would be sadder still if we remained in it," Fr. Perri said. "God beckons to us, too," he added. "Beckons us to realize that He is not simply the refuge of those who have fallen. He is also the sure hope of those who are alive."