Three sons, thanks to Brother André

MONTREAL — Effie Cordeiro is still in a state of sublime joy nearly two weeks after receiving the Eucharist from the Pope October 17, during the canonization Mass for Brother André.
"It was awesome, amazing. I'm still trying to absorb it," said the mother of three young adult children, whose births she and her husband, Brian, attribute to the intercession of Saint Brother André. The five of them travelled to Rome for the canonization — a family pilgrimage of thanksgiving. Their pilgrimage really began when, after several years of marriage, the young Indian couple experienced difficulty conceiving a child. They opted for a fertility treatment, which proved disastrous. Two major surgeries later, Effie's hopes of ever conceiving a child had vanished. 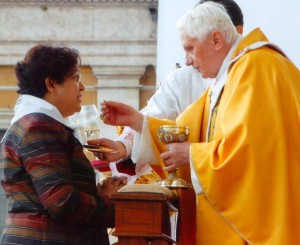 Distraught, the couple sought to immigrate to Canada. They arrived in Montreal from the United Arab Emirates in July 1989 and visited St. Joseph's Oratory, where they decided to place their trust and hope in Brother André and Saint Joseph. They prayed together at the oratory to be blessed with a child. Nine months later, Effie gave birth to their first son, André Joseph, followed by two other sons in the next two years, Pierre Bosco and Jean Vianney. "We had decided to come to Canada because we could not have children and, on our first day in Canada, I got pregnant. God has a real sense of humour," Effie laughed. Effie's compelling story led the archbishop of Montreal, Jean-Claude Cardinal Turcotte, to select this parishioner of St. Luke Parish as the official Montreal delegate to receive the Eucharist from the pope at the canonization mass. At the last minute, on the eve of the canonization, another Quebecer who was to receive Communion from the pope backed out, allowing her husband to join her. The Cordeiros were among a handful of Quebec pilgrims to receive the Eucharist from the pope that day. About another 50 people, representing delegations linked with the other five saints canonized October 17, also received Communion from the pope. Effie recalled the various security checkpoints they had to go through at the Vatican before finally getting to their seats in St. Peter's Square; they sat in the third row of a special section in front of the altar. "This is the highest you can be on this side of eternity," she recalled telling her husband while waiting for mass to begin. Effie recounted her experience of receiving Communion: "I knelt in front of the pope and we looked at each other. He has such a kind face and blue eyes, and he was gently looking at my face. It was surreal: I received Jesus from (the man) coming from this long line of popes, starting from Peter. I'll never forget it." "I cry for joy at the thought of Brother André's canonization," she said. "I love him because of the miracle in my life but also because... he was shining where he was, doing his small tasks well without expecting rewards."