“This economy kills”: anticipation mounts ahead of Pope’s US trip 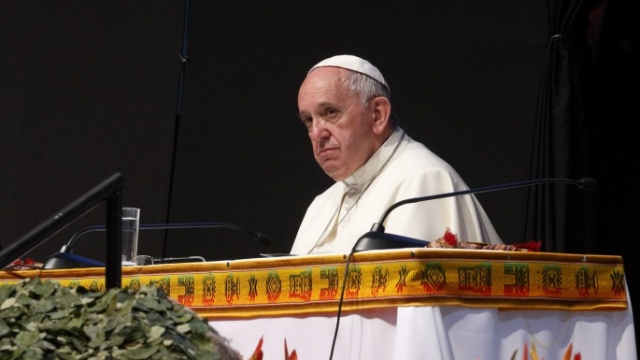 (Pope Francis listens attentively to speakers at the World Meeting of Popular Movements in Bolivia on July 9.  Photo courtesy of CNS)
In two years Pope Francis has said enough about the global economic system to spark both enormous enthusiasm and heavy criticism.  The story is still developing, but after his recent trip to Latin America, the prevailing sense is that it will climax when he sets foot on US soil for the first time in September. Personally, I’ve never seen Francis so comfortable, at home and in his element as he was during his week-long trip through Ecuador, Bolivia and Paraguay last week.  Evidently he felt totally free to speak his mind and heart to his native Spanish speaking audience.  And when he spoke about economics, the message was clear. Of the many and consistent critiques Francis made of the current economic system last week, none was more powerful than the address he gave to the World Meeting of Popular Movements in Santa Cruz, Bolivia—one of the poorest countries in Latin America. The message simply stated at the beginning was, “land, lodging and labor are sacred rights for everyone.”  The problem is that this is not the reality.  “We want change,” he said, from “an unfettered pursuit of money,” or—as Francis described it—“the dung of the devil.”

“Once capital becomes an idol and guides people’s decisions, once greed for money presides over the entire socioeconomic system, it ruins society, it condemns and enslaves men and women, it destroys human fraternity, it sets people against one another and, as we clearly see, it even puts at risk our common home [the earth].”

Francis continued by encouraging the Popular Movements and the people of Bolivia to be the change they want to see; to take control of their own lives and lead by example: “The future of humanity does not lie solely in the hands of great leaders, the great powers and the elites,” he said, “It is fundamentally in the hands of peoples and in their ability to organize.” It was by no means the first time Pope Francis has blasted the current economic system.  Since the publication of his 2013 exhortation The Joy of the Gospel, the critique has been piercingly clear and consistent.  Because of this, it has drawn criticism from the capitalist faithful—many of whom are in the United States—who deflect the Pope’s criticism by saying he doesn’t fully understand economics and shouldn’t be involved in making policy. Well, oddly enough, the Pope actually agrees.  In that same address to the Popular Movements the Pope for the first time said that he doesn’t have the specific solutions to the socio-economic problems of the world:

“Don’t expect a recipe from this Pope.  Neither the Pope nor the Church has a monopoly on the interpretation of social reality or the proposal of solutions to contemporary issues. I dare say that no recipe exists.”

A few days later on the return flight to Rome, the Pope was asked about his economics message and the criticism it sparks in the United States.  The Pope, again for the first time, acknowledged that he hasn’t studied the criticisms:

“I heard that there were some criticisms from the United States. I heard about it, but I haven’t read about it, I haven’t had the time to study this well, because every criticism must be received, studied, and then dialogue must be ensue. You ask me what I think. If I have not had a dialogue with those who criticize, I don’t have the right to state an opinion, isolated from dialogue.”

The anticipation is mounting… It appears the showdown will finally happen when the Pope arrives in Washington in September.  What the Pope will say in his address to the American Congress is anybody’s guess, but we can be confident that it will factor in the predominantly American criticisms of his economics message.  That will be something new, a development in the Pope’s expression of his own ideas. Finally, we might be tempted to think that the Pope’s humble admission of ignorance of his critics is typical of the man whom the world knows as simple, humble and innocent.  But I would call him subtly shrewd.  The Pope essentially outlined the process for the discussion by emphasizing dialogue through encounter.  Ideas and theories—economic or otherwise—can live in the clouds.  The people affected by the implementation of those ideas and theories can only live on the ground.  And that is where the Pope will finally meet his critics face to face.

On Further Reflection In the complex world of the 21st century there are more questions than answers. The challenge for the Church is to find new and effective ways of bringing the Gospel message into the conversation.  For her part, the Church can act as a much needed voice of dialogue, reason and charity. On Further Reflection invites readers to go beyond the headlines to see the deeper realities affecting the Church and society.  Sebastian Gomes is a producer and correspondent for S+L TV.