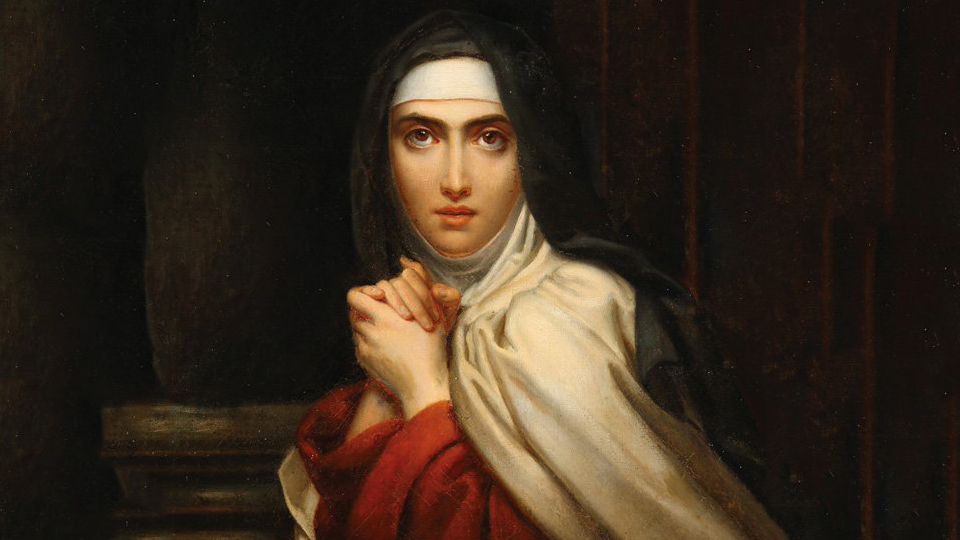 Detail of St. Theresa, 1827, by French painter François Gérard
Quick: tell me your favourite thing about St. Agileus. Having a tough time with that one? Then how about St. Antiochus? St. Fortunatus? St. Aurelia of Strasbourg? St. Thecla of Kitzingen? St. Cannatus? None of them? How about St. Callistus? Now, careful on that one. Even if you know something about a St. Callistus, unfortunately I’m not asking about that St. Callistus. And what about St. Euthymius the Younger? St. Severus? St. Flavia? St. Sabinus? St. Leonard Vandoeuvre? If you know something off the top of your head about any of those saints, I’ll admit that I’m impressed. They aren’t exactly the most popular and well-known of those who have been canonized. But they are all saints, official and recognized saints of the Catholic Church. On top of that, they’re all saints whose feast day is celebrated today, October 15. Oh, here we go… St. Teresa of Ávila? If there’s one you might know, it’s probably her. A great virgin, mystic, and doctor of the Church. An incredible woman in our faith. Her feast day is today as well. Now, maybe you’re asking: What’s the deal with October 15? Why so many saints today? Well, actually, it’s not just today. If you didn’t know, each and every date in the year has a bunch of saints who are remembered that day. Some of them, especially the most significant and recognized, are celebrated in a more official and mandatory way during liturgies and things, but many aren’t. Many of the men and women who have been declared as saints don’t get a whole lot of pomp and pageantry when their feast comes around, and today that’s the case for Agileus, Antiochus, Fortunatus, Aurelia, Thecla, Cannatus, Callistus, Euthymius, Severus, Flavia, Sabinus, and Leonard. Now, you might ask: but why? Why all these saints? And if we’re already so overloaded, do we really need them all? The simple answer is yes. They’re wonderful to have. In fact, the Church is always in the process of naming more. Just yesterday, we had the chance to welcome seven brand new men and women into the canon of the saints: Pope Paul VI, Archbishop Óscar Romero, Fr. Vincenzo Romano, Fr. Francesco Spinelli, Mother Maria Katharina Kasper, Mother Nazaria Ignacia March Mesa, and Nunzio Sulprizio. At an inspiring Mass in Rome, they were canonized and officially declared saints of our Church. It was a truly beautiful moment, a recognition of their holiness. And, admittedly, it was a further overcrowding of the already full sanctoral cycle. Which brings us back to that question: why? Well, just look at the saints we remember today on October 15. In that list, you have early martyrs, medieval nuns, a preacher, a monk, an abbess, and a bishop, and that’s not to mention that the group includes a Greek, a Roman, an African, a Frenchman, an Italian, and a Spaniard. On this single day, the Church has the chance to celebrate such a great diversity in and of its saints. That variety was something that continued yesterday, too, as Pope Francis canonized an assortment of individuals: two nuns, two priests, a pope, a bishop, and a regular old teenager. These were men and women of different eras and backgrounds. They had different jobs, experiences, and ministries. They lived and worked in places all over, including Italy, Mexico, Germany, El Salvador, Spain, and Bolivia. And that is one of the truly amazing and valuable aspects of the approximately 10,000 saints that have been officially named by the Church. They’re all different. There’s no single cookie cutter or formula to becoming a saint. There’s no single way to holiness. The vast collection of saints shows us that anyone and everyone can live out a holy life and can do so in many different ways. That’s awesome, but it’s also dangerous. Because it means that you and I can live out that same kind of holiness. It means that you and I have no excuse, really, to not try to be saints in our world and in our lives today. The impressive assortment of saints we celebrate today and the brand new group that were canonized only one day ago show us that no matter who you are or where you’re from holiness is very possible in your life, and it’s that holiness that you’re asked by God to share with the world. Now, that might seem crazy. “I’m supposed to be a saint? I’m not so sure about that.” It might seem nuts to you or maybe even somewhat terrifying, and if that’s the case, I want to point us back to St. Teresa of Ávila for a moment, the one saint the Church remembers today that many people might have actually heard of. She was an exceptional woman in many ways who is known for her great mysticism, intellectual writings, and all sorts of big, impressive Church stuff. One of the most powerful things she may have left us, however, was a tiny poem that was found written on a piece of paper in her breviary. Often simply called the “Nada Te Turbe,” it was originally composed in Spanish, but in English it reads:

Let nothing disturb you, Let nothing frighten you, All things are passing away: God never changes. Patience obtains all things Whoever has God lacks nothing; God alone suffices.

What a poem. What a prayer, really. Clearly the words of a holy woman, the words of a saint. Like Teresa of Ávila and so many saints, the ones we know and the ones we don’t, we’re all called to try our best to live out lives of holiness. It’s not easy to do, but we all can. We all can because God is with us, here’s here to help us, and through all things God alone suffices.