The President and the Pope: Vladimir Putin Comes to the Vatican 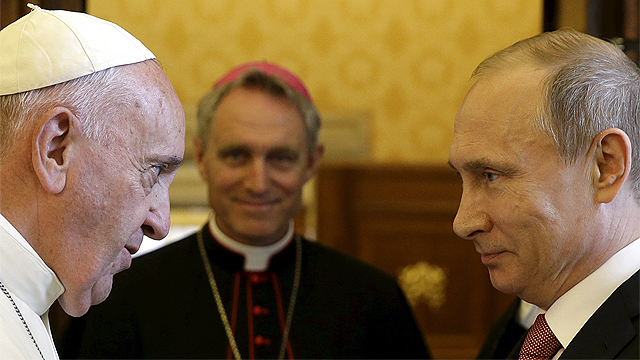 Last week Pope Francis and the Vatican played host to one of the single most influential people on the planet in Vladimir Putin. Love or hate the man, his effect on international affairs is unparalleled. This is probably why the Vatican quickly adjusted Francis’ schedule upon receiving the 11th hour request for a meeting with the Russian President.
Putin’s visit was a rare foray westward, as a number of leaders in Europe and North America have sought to isolate Russia over the crisis in Ukraine. However knowing full well the opportunity it had before it, the Vatican was not going to waste a chance at dialogue because of the foreign policies of certain governments. Even the day of the visit, US Ambassador to the Holy See Ken Hackett (no doubt reciting talking points from the State Department in Washington), encouraged the pope to come down hard on Putin over Ukraine.
Ultimately none of this prevented the meeting from going forward and it was by all accounts successful discussion. The Vatican proved a very important point in proceeding with the meeting, and that is that it will not simply be content to play the role of chaplain to the west. If the Church is to be taken seriously as a global institution then it must forge ahead with its own policies that are independent of any particular government or special interest big and small. This isn’t to say that this has been the policy of the Church, but geographically and culturally nestled in the bosom of the west, it would be an easy trap to fall into. It also helps to establish the Church as a respected player on the international stage. Why else would Putin have made such an effort to meet with the Holy Father if he didn’t see him as an influential and independent difference maker?
History has proven that it is far more beneficial to peace and global stability for nations to speak to one another than to speak about one another. One need not look back further than the Cold War to realize that the world became a safer place when Khrushchev and Kennedy got on the phone during the Cuban Missile Crisis and talked their problems out. Today’s modern Cuban diplomatic miracle is further proof of that. Nothing was accomplished after half a century of not talking between Cuba and the U.S., however meaningful dialogue (facilitated by the Holy See), has brought about what has to be described as a safer, more peaceful world.
A lack of dialogue leads to a lack of trust, and a lack of trust is a hotbed for misunderstanding. Geopolitically, the world is a tough neighborhood to play in right now. We cannot be afraid to walk outside and talk to someone across the street, no matter how rough the conditions may seem. The Vatican appears to be following this path of dialogue, one that will hopefully allow for a greater sense of peace amongst all peoples.