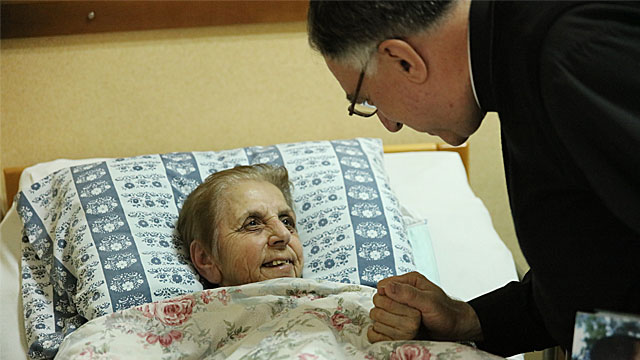 Fr. Rosica with one of the residents of Qubeibeh.
The unofficial theme of Salt + Light’s 12 day pilgrimage to the Holy Land was “Living Stones.” For every biblical site visited, there was a visit to a place where Christians are currently putting the Gospel into action. The combination of the ancient and new Christian holy sites proved to be both jarring and edifying. One of these visits took place in Qubeibeh, a Palestinian village in the West Bank.
Qubeibeh is home to a church that commemorates Jesus walking to Emmaus with two disciples. It is also home to the Salvatorian sisters home for abandoned women.
The Church of the Breaking of the Bread is a under the care of the Custody of the Holy Land. Because of its location behind Israeli checkpoints, few visitors come here.
Just down the road Sister Hildegard and her fellow sisters run a home for elderly or disabled women, many of whom have been abandoned by their families. The sisters also run a cooperative to help local women make a living. In addition, Sr. Hildegard established a satellite campus of Bethlehem University’s Faculty of Nursing. With the Salvatorian sisters the women of Qubeibeh rediscover their dignity, find affection and purpose in their lives regardless of their background or family situation.
Seeing the Salvatorian sisters at work was eye opening, but it wasn’t until Sr. Hildegard Enzenhofer shared the story of how it all came to be that we felt our hearts burning within us. 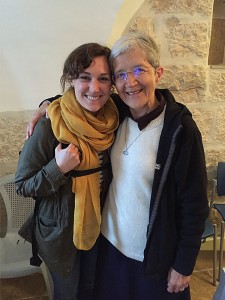 Emilie with Sr. Hildegard.
The existence of the Faculty of Nursing in Qubeibeh can only be attributed to the Holy Spirit.
Sr. Hildegard used to visit a woman who lived in a cave because she had been disowned by her family after she gave birth to five daughters. The sisters gave the woman and her daughters food, friendship and basic supplies. One day the woman said to Sr. Hildegard, “Food is good, but the best help you could give us is education.”
These words stayed with Sr. Hildegard in the way that only words from the Holy Spirit tend to do. She approached the, then-brand new, vice-chancellor of Bethlehem University. He loved the idea but like Sr. Hildegard didn’t know where to start. A providential conversation with a stranger while waiting for a friend in Jerusalem open the door to UN development funding for the school.  Soon qualified professors appeared out of the woodwork in Qubeibeh.
Still, Sr. Hildegard proceeded with cautious optimism. She explains, “we started building in February (2006), we had our first classes in August, but I bought only 25 chairs. I thought it better to start small and expand as needed. So we took our first computer out of the box in December.”
From the very beginning the board of directors emphasized that the faculty was open to women and men, Christians and Muslims. That led some families to decide against enrolling their daughters, “but this also is education,” says Sr. Hildegard defending the school’s unwavering co-ed policy. After several years of operation the school’s board of directors established a scholarship for a Bedouin girl - no small feat considering most Bedouins do not educate their daughters. It was a challenge to find a Bedouin girl with a high school education and another challenge to convince her father to allow her to attend a co-ed nursing school. But the girl’s education was such a boon for the family her father eventually approached the sisters saying “You know, I have another daughter…”
Today the Qubeibeh Faculty of Nursing boasts a 98% employment rate among graduates. That is a commendable rate for any university. But when you consider that the overall unemployment rate in the Palestinian territories is 27 percent rising to 40 percent for young men and 63 percent for young women, the success rate in Qubeibeh is astonishing.
The Faculty of Nursing is not the only project the Salvatorian sisters have had a hand in making flourish in Qubeibeh. They focus on helping all women in the region, not the univeristy aged. But that is whole different story.