The Empty Tomb At The Church of The Holy Sepulchre 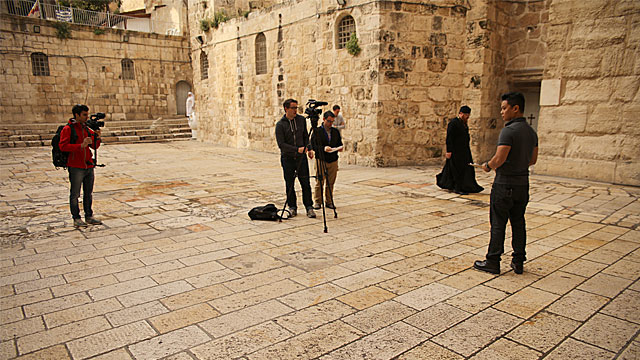 In March 2016, the Salt + Light team went to the Holy Land on pilgrimage to bring you reflections from the biblical places where Jesus lived. You can watch the entire videos from the Holy Land Trip here. The following text below is from my reflection about the empty tomb of Christ, that was recorded at the Church of the Holy Sepulchre in Jerusalem.

Over the past 7 days, many of us from Salt and Light have been here in the Holy Land on retreat, reflecting on what it means to live and follow in the footsteps of Christ.
Since being here, we have followed the life of Jesus. From where he was born in Bethlehem, to where he grew up in Nazareth. From where he preached on the Mount of Beatitudes, to where he  performed miracles at the Sea of Galilee and now, to this very place - where He was crucified, died, was buried and rose from the dead…
The biblical events that took place here over 2000 years ago are interlinked, as is the Paschal mystery of the death and resurrection of Christ, which was fulfilled after thousands of years of prophecy, within the very walls of this massive church. You can feel it. This very place is the source from which all mankind receives salvation and life.
Within these walls contain the most important place for Christians. For over 2 thousand years, pilgrims have come from all over the world just to see Calvary and the Tomb of Christ.
This building enshrines the last hours of Christ on earth who, made man, died for our salvation. Therefore, as I reflect on the fundamental importance of this place, it becomes very clear that this place is indeed THE wellspring from which the salvation for mankind springs forth. This place is truly the cornerstone of our Catholic faith.
Now, despite this building's remarkable legacy, I have no intention of diving into a historical account, except to say that the decision to erect this church here is said to have been the result of lobbying on the part of St. Helena, the mother of Emperor Constantine, 300 years after the Crucifixion.
Now the original appearance of this church remains uncertain, owing to the many changes that has taken place on the site since 326 AD, when construction first began under Constantine . 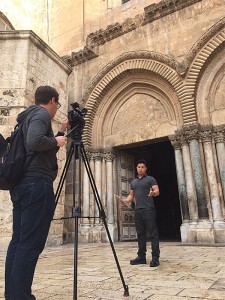 Also known as the Church of the Resurrection by early Christians, this church is within the walls of the Old City of Jerusalem and surrounded by markets and souvenir shops. Today, it is home to the Eastern Orthodoxy, the Oriental Orthodoxy and to the Roman Catholic Church.
I’d like to take a moment to reflect on the spiritual significance, of this place, the Sepulchre, the empty Tomb of Christ.
Patriarch Bartholomew summarized it best when Pope Francis visited this site during the historical Papal Visit back in May of 2014. He stated:
"The first and greatest message from this empty Sepulcher is that death..“this last enemy” of ours, the source of all fears and passions, has been conquered. It no longer holds the final word in our life. It has been overcome by love, by Him, who voluntarily accepted to endure death for the sake of others. Every death for the sake of love, for the sake of another, is transformed into life, true life. “Christ is risen from the dead, by death trampling down death, and to those in the tombs, He has granted life."
Nonetheless, there is another message that emanates from this venerable Tomb, the Sepulcher.
This is the message that history cannot be programme, that the ultimate word in history does not belong to man, but to God.
In vain did the guards of secular power watch over this Tomb.
In vain did they place a very large stone against the door of the Tomb, so that none could roll it away.
In vain are the long-term strategies of the world’s powerful – everything is eventually contingent upon the judgment and will of God. Every effort of contemporary humanity to shape its future alone and without God constitutes vain conceit.
Finally now, I leave you with this thought. Even with the masses of pilgrims that you see walking to and fro and in all directions in what you’d expect to see in a shopping mall rather than in this holy place, you can still fall on your knees and proclaim with joy, “Alleluia, Jesus is Risen, He is not here." Regardless of the Christian denomination you belong to, you can be certain that this is the very place that witnessed the Glory of God in Jesus Christ.
Without a doubt, to be present within these walls here, where Christ spent his last painful moments on earth, suffering for our flawed humanity, in his single greatest act of love, as the Son of God, is truly a very humbling experience.
Indeed, Alleluia!, Jesus is Risen, He is not here.

--
Noel Ocol was the Director of Marketing for Salt + Light. He currently works as an English Producer.