Taizé vs Cluny: spiritual centers that tell the story of a church in history 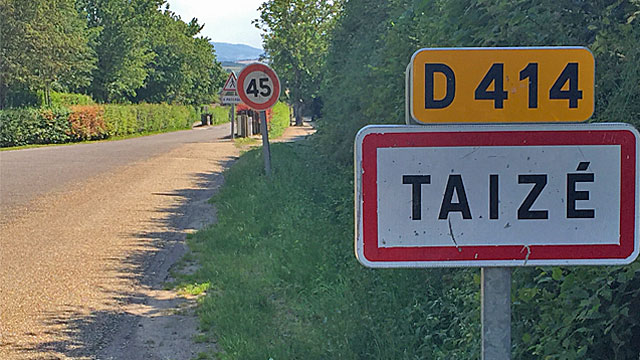 (People gather in one of the catechesis tents at Taizé, France.  They begin each session by singing one of the widely popular chants of the community.) In a remote east-central region of France sit two distinct spiritual centers that tell the remarkable story of a church that is always situated in a particular moment history. The internationally known Taizé community, with its brothers from various Christian traditions dressed in white robes, occupies most of the land of the hilltop town in the countryside about an hour’s drive north of Lyons.  The remains of Cluny Abbey, the millennium-old center of medieval monasticism, are just a ten-minute drive south of Taizé. Last weekend I visited the Taizé community—a visit well worth the long journey—and as I followed my Google Maps app, I was surprised to see “Cluny” pop up just down the road.  What a remarkable thing that these two places are neighbors in the rural countryside of Burgundy. 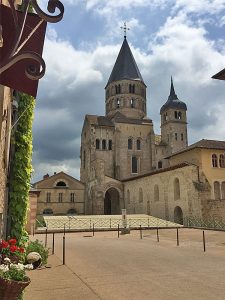 Cluny was the headquarters of monastic reform in the 10th and 11th centuries.  By that time, Benedictine monasteries had sprung up across Europe—the order was already about 400 years old by that time—and monastic life had become a bit lax in practice or too closely aligned with political and economic forces.  Pope Francis would say they had become a bit “worldly”.  Cluny was a response.  The Cluniacs called for stricter adherence to the Rule of St. Benedict, challenged simony (the buying and selling of ecclesial posts), and promoted clerical celibacy. The motherhouse at Cluny eventually became the spiritual head of more than a thousand satellite monasteries across Europe and some of their monks even became popes—a development which institutionalized for the universal church some of the Cluniac reforms.  What’s left of the physical monastery is still impressive.  Only one tower remains, but what struck me was the sheer size of the area where the cloister and church once were.  It must have been an imposing structure.  But today it is only a museum.  There are no monks, no libraries, no chanting. Meanwhile, up the road at Taizé there were 750 young people sleeping in grungy cabins or in tents in the field, attending catechesis and chanting beautiful hymns of praise to God.  The Brothers are expecting the number of visitors to increase to four or five thousand by July.  Taizé is like a mini, perpetual World Youth Day, where you see new people every day, sleeping quarters are tight and the food is…well, it’s food. 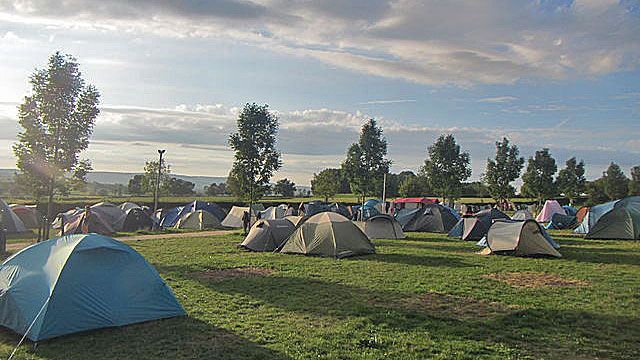 But it’s alive.  The fraternal spirit of Brother Roger—the founder who was brutally murdered during evening prayer in 2005—still permeates the place.  Dozens of Brothers (most of them young men) of all traditions and cultural backgrounds live and pray every day alongside their guests.  All are welcome.  It is a place of reconciliation, healing, peace and fraternity.  The music, which people around the world have come to know and love, is simply the audible expression of the experience people share when they are there. I learned two important lessons from my experience in Taizé and Cluny.  First, there is no guarantee that building impressive churches, structures or institutions will inevitably draw people in or give them life—at least not forever.  We know that from the grandiose yet empty halls at Cluny, and from the grungy yet overflowing tent-city at Taizé. Second, different spiritual reforms are needed at different moments in the church’s history.  You could argue that Cluny struck a spiritual nerve in the 10th century just as Taizé does today.  There was a need for monastic reform back then, just as there is a need for tangible expressions of ecumenism and fraternity in our church and world today.  There is something to be said for reading the signs of the times in light of our history, and the eruption of the Spirit in the Taizé movement should be cause for serious reflection on who we are as Christians in the world today.  Perhaps, like the Cluniac reforms a millennium ago, the vision of realized Christian unity will even become institutionalized.