Sunday night premiere - Within Your Gates: A Pilgrim Guide to the Holy Land

Regular blog readers will recall that in November, Salt + Light filmed extensively in Israel and the Palestinian Territories. Tonight we show you the first film from that trip: Within Your Gates: A Pilgrim Guide to the Holy Land. 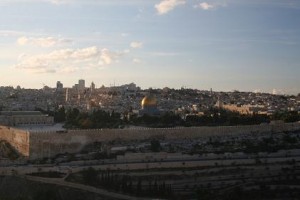 This evening's broadcast commemorates the first anniversary of Pope Benedict's own voyage to the Holy Land. I credit the Holy Father with introducing me to the spirituality of the biblical sites, as I followed him while providing live commentary for his eight-day visit. As I watched the Pope travel from Amman to Jerusalem, then to Bethlehem and Nazareth, I often wondered whether he was disappointed by the experience. At each stop, he was surrounded by boisterous crowds. Dignities pressed in on him at every turn. Surely he felt the pressure of knowing that every word was being mined for political significance. Cameras stared as he tried to pray. 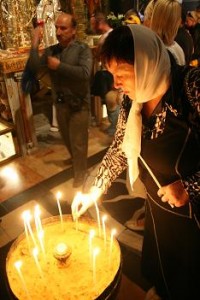 Similarly, my own trip to the Holy Land risked being overwhelmed by external pressures, as I described in an earlier post. I needed to stay focused on my work, which was often undermined by the complicated logistics of filming in a foreign country (whose labyrinthine streets, frustratingly, haven't yet been been mapped by Google). So, to ensure that I benefited spiritually from the experience, I sought out a Catholic pilgrim guide. Multiple recommendations led me to The Pilgrim's New Guide to the Holy Land by Fr. Stephen Doyle, OFM. The Christian Brothers at Bethlehem University trustingly lent me their out-of-print copy. (Brother Peter: I promise to return it!) Instead of just deepening my personal journey, Fr. Doyle's descriptions and biblical reflections ended up inspiring the documentary you'll see tonight. Having led countless tours before his retirement, the Franciscan reminds us that pilgrims aren't drawn to the Holy Land for its archaeological importance. Rather, here, in a unique way, the Holy Spirit still sings of the God who broke through and walked among us. Within Your Gates airs tonight on S+L at 8:30 pm ET (11:30 pm PT). For a preview, watch the Thursday, May 13th edition of Perspectives.