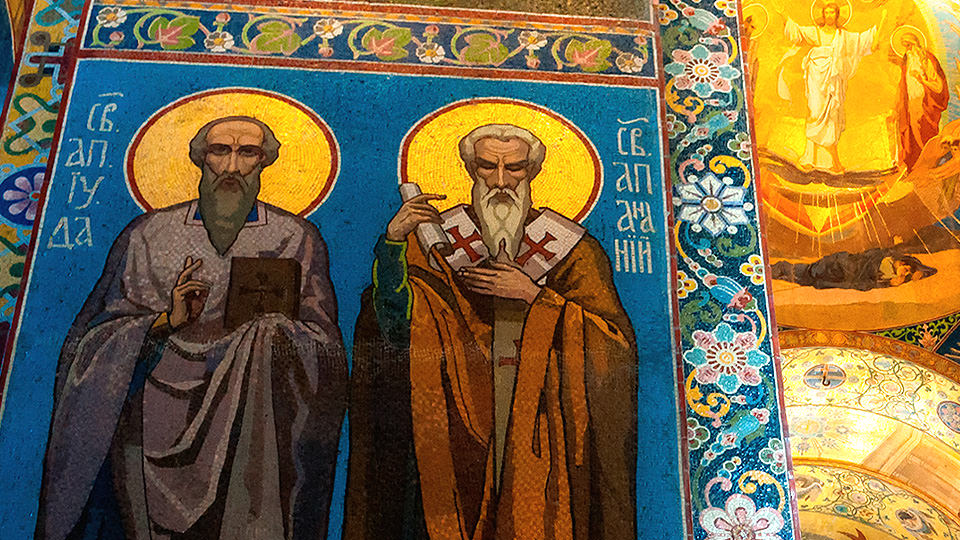 Cathedral of Our Savior on Spilled blood - interior of St Petersburg landmark. Mosaics at the columns, Apostles Ananias and Jude at the foreground. (Copyright: Getty Images)
A week into a lay ministry position in rural Alberta, I found myself in the lone coffee shop in a village of about 400 people. I was spending time getting to know the regulars, which meant that they needed to get to know me. In the course of our conversation, one of them curiously asked, “So, where’re you from?” Abashedly, I mumbled, “Toronto.” I was born and raised in one of the giant metropolises that some folks from the rural prairies might harbour suspicions about. But the man who asked about my origins, in an effort to transcend divisions of farm and city, warmly replied, “Everyone’s from somewhere.” St. Simon and St. Jude remind us that everyone is from somewhere. They also remind us that the question, “Who are you now?” can be more faithful to God’s call than, “Where are you from?” In the Gospel accounts, they’re listed as two of the twelve disciples. St. Simon's patronage is ascribed to leatherworkers and sawyers, possibly from traditions about the instruments used in his martyrdom. St. Jude is the patron of hospitals and police forces, alongside his most well-known patronage: desperate and hopeless causes and situations. It’s believed that he became the patron of lost causes because the faithful were hesitant to invoke any “Jude” in case they accidentally relied on the Judas who betrayed Jesus. Unlike Judas, Saint Jude, who remained faithful to Christ all the way to his own martyrdom, was happy to help in even the most dire circumstances. St. Simon and St. Jude are also referred to as Jesus’ “brothers” or “cousins.” (Matthew 13:55) St. Jude begins his Epistle by calling himself a “brother of James,” which implies a family connection to Jesus and Mary, but that’s as much as we know for sure. A Vatican profile on them points to this paradox: Jesus' own flesh and blood are two of the least-known Apostles. The paradox plays down the importance of their natural relations, and perhaps that's part of the point. There are a few examples of Jesus elevating God's will over the rights of blood lineage, most notably the awkward encounter in Matthew 12:46-50. Mary and more of Jesus’ relatives are trying to reach Him through a crowd. He replies, “Who is my mother, and who are my brothers? Whoever does the will of my Father in heaven is my brother and sister and mother.” (Matthew 12:48, 50) Two other examples stand out. At one point, some Scribes and Pharisees assert that their actions are right because “Abraham is our father.” Jesus responds, “But now you are trying to kill me, a man who has told you the truth that I heard from God. This is not what Abraham did.” (John 8:39-40) Lastly, that list of Jesus’ “brothers” or “cousins” in Matthew 13:55 is used by jealous fellow Nazarenes to reduce Him to simply “the carpenter’s son” instead of someone sent by God with “wisdom and deeds of power.” The issue isn't about Jesus' biology or about family origins as they exist. Mary's biological connection to Jesus, and Jesus' biological connection to His Mother, is precisely the way that our wonderful Creator came to us and “still more wonderfully restored” our nature. (Roman Missal, Collect for Christmas Day) Jesus’ physical lineage as The Son of Abraham, Israel and David is the foundation of His Messianic identity, which is why both Matthew and Luke spend time going over genealogies. Jesus contrasts obedience to God and birth lineage because He’s concerned about people relying too much on the past. In the dispute about Abraham in John 8, He critiques those who slothfully rest on the laurels of a birthright given to them and blithely assume that just because you have the "right" upbringing or "wrong" upbringing, your path is firmly set. Instead, Jesus calls us to actively receive what was passed down and to discern, with the Church, who God is calling each of us to be and what God is calling each of us to do. 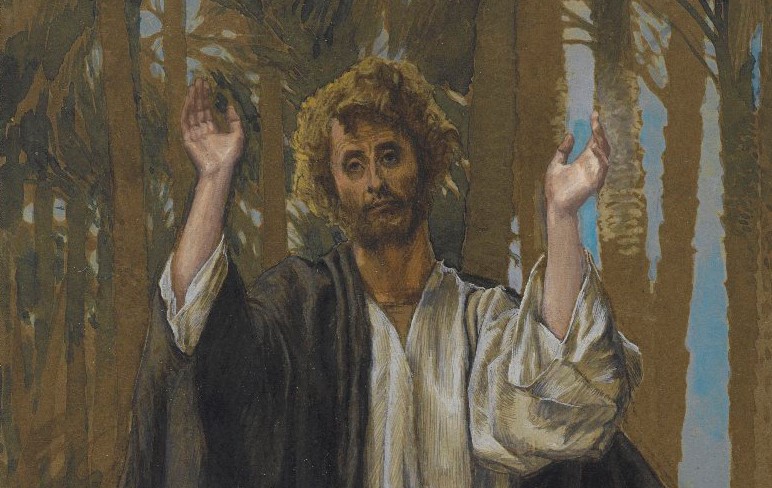 St. Simon, Brooklyn Museum. (Source: Wikimedia Commons)
“Whoever does the will of my Father in heaven is my brother and sister and mother.” That is Good News for anyone who thinks that they are “lost causes,” were born into the “wrong family,” or often get looked down on for having a humble job like a carpenter or leatherworker. It’s also good news for those who receive their inheritance of faith, but struggle to find their unique vocation and identity in it.  Jesus’ words and Jesus’ own life open us up to new possibilities beyond the limits of our imagination. Everyone comes from somewhere, but what if God has made you for more than just your origins? People face circumstances that seem hopeless, and many situations are indeed desperate and dire, but how might God be offering the opportunity for hope through new paths of solidarity and creative ingenuity? How might He shine the light of His presence through the loving companionship of friends and family, through the lives of the Saints, and through prayer, Holy Scripture, and the Sacraments? Can you hear Jesus’ invitation to be His “brother and sister and mother”? The foundation of our Faith in God and His Church can be a tremendous source of courage and compassion. In what ways do you blithely accept this foundation without embracing your place in it? In what ways do you actively receive the deposit of Faith, responding to our common vocation to pass on what we have received with courage and compassion? How are you, with the Church, discerning God’s will to receive and share God's love with the people you meet, in your workplace, your home, and wherever else you find yourself? We remember St. Simon and St. Jude because they answered those questions by following when their cousin called them to join His ministry. We venerate them as Apostles because they carried on in mission after Jesus' Resurrection and Ascension. Traditions about the specifics of where they went, what they did, and how they were martyred are as varied as their Scriptural origins. If you’re curious (like I am), Deacon Pedro lists some possibilities. Ultimately, Sacred Tradition associates them with each other: they are buried together beneath St. Peter’s in Rome, and today we celebrate them on their common Feast Day. My point is that they went. They continued on a journey beyond their familiar environs and shared the Gospel in new lands. They challenged the powers of darkness and despair. They stared down the worship of popular idols, and were martyred in that very confrontation.  In their life, their death, and their special care for humble curriers, tanners, sawyers, overworked hospitals, and desperately hopeless causes, St. Simon and St. Jude offer us a witness to the Gospel that transcends the limits of their own origins. They were already part of Jesus’ biological family, but they received His invitation to go deeper than that, to be “brothers” of Jesus by following the will of the Father. And so, their hope endures through hopelessness. The light of their joy shines through the great darkness of loss. The initial spark of their vocation as disciples may have sprung from their personal connection to Jesus, but they received the Holy Spirit and went on to “praise [God’s] deeds to the next [generation].” (Psalm 145:4) St. Simon and St. Jude, pray for us.