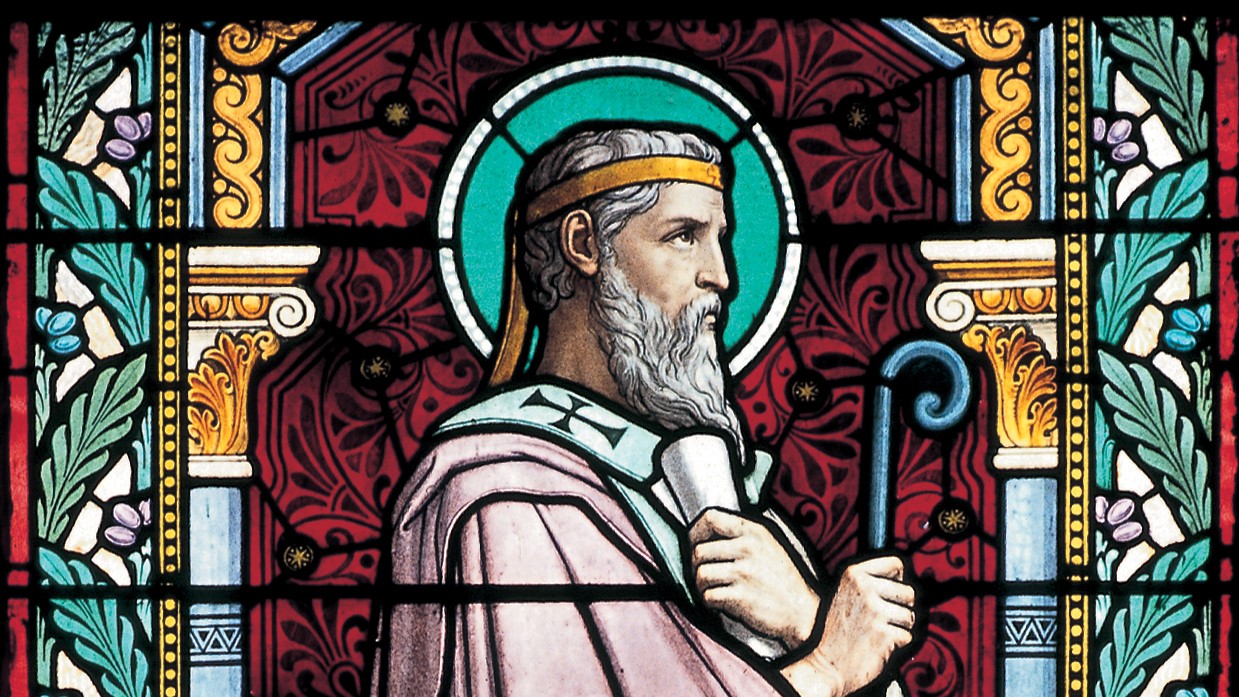 Stained glass window representing St. Irenaeus of Lyons in the Church of St. Irenaeus in Lyons, France. Photo by Gérald Gambier on Wikimedia Commons.
Last month, while speaking to a group of theologians who work to promote Orthodox-Catholic dialogue under the patronage of St. Irenaeus, Pope Francis announced his intention to declare this 2nd-century theologian and bishop a Doctor of the Church. But who was Irenaeus, and why is he so important to us today?   Who was Irenaeus of Lyons? We actually know very little about Irenaeus the man. We know that he was born sometime in the first half of the 2nd century AD in (or very near) the Roman province of Asia (the western part of what is now Turkey) and that when he was young, he had listened to St. Polycarp, the Bishop of Smyrna, who had been a disciple of St. John the Apostle. At some point he ended up in Gaul (modern France), in a city called Lugdunum, which we know today as Lyons (sometimes also spelled Lyon). In the 170s, he was sent by the local Christian community to Rome to bring a letter to the pope concerning their troubles with a heresy called Montanism. While he was there, a brutal persecution took place back in Lyons which resulted in the deaths of many Christians, including the bishop. When Irenaeus returned to Lyons, he was made bishop and spent the rest of his life looking after his flock and spreading the Christian faith, which involved combatting a pernicious mode of heretical thought known as “Gnosticism” which was infecting Christian communities. He wrote his most famous work Against Heresies in order to set out some of the Gnostic teachings and mythologies and to refute them by means of logic, Scripture, and appeals to teaching received directly from the Apostles. The date of his death is unknown, but it would have occurred sometime in the late 2nd or early 3rd century.   Who were the Gnostics? First of all, it’s important to recognize that “Gnostics” and “Gnosticism” are relatively modern terms that encompass a range of belief systems. To identify then what these so-called “Gnostics” believed is no easy task because there was no one branch of belief or a central teaching authority. Even to consider Gnosticism a heresy of Christianity is not quite correct. Firstly, there is no one system of heretical belief called “Gnosticism”; rather, it is a somewhat broad umbrella which lumps together various groups of people who believed that salvation and redemption came to them through the possession of certain knowledge (gnosis being the Greek word for knowledge). And secondly, these systems did not originate within Christianity. One way to see these various belief systems would be as a sort of mishmash of ancient religions and Classical philosophies that adopted Jesus into the mix.

"And not only are they convicted of bringing forward, as if their own [original ideas], those things which are to be found among the comic poets, but they also bring together the things which have been said by all those who were ignorant of God, and who are termed philosophers; and sewing together, as it were, a motley garment out of a heap of miserable rags, they have, by their subtle manner of expression, furnished themselves with a cloak which is really not their own." (Against Heresies, II.14.2)

Although Irenaeus refutes them as a whole within his work, they did not consider themselves a single entity, nor did Irenaeus, who warns that they come in many different stripes and flavours:

"But since they differ so widely among themselves both as respects doctrine and tradition, and since those of them who are recognised as being most modern make it their effort daily to invent some new opinion, and to bring out what no one ever before thought of, it is a difficult matter to describe all their opinions." (I.21.5) "Many offshoots of numerous heresies have already been formed from those heretics we have described. This arises from the fact that numbers of them — indeed, we may say all — desire themselves to be teachers, and to break off from the particular heresy in which they have been involved. Forming one set of doctrines out of a totally different system of opinions, and then again others from others, they insist upon teaching something new, declaring themselves the inventors of any sort of opinion which they may have been able to call into existence." (I.28.1)

However, two major underlying motifs or trends which informed these mythologies and systems of belief can be noticed across all the different sects which took dangerous root in Christian communities – and one could say that they have never truly left:   Why is Irenaeus important to the universal Church? As Catholics, it is important for us to be able to trace our Church – in both her hierarchy and her teachings – back to the Apostles and to Jesus himself. Thus, the writings of our early Church Fathers are precious to us not only because they draw back the curtain on life in the first centuries of Christianity but also because they reveal to us the great antiquity of our beliefs. Irenaeus lived at a time when the Church was only removed by one generation from the Apostles themselves: He had been taught by Polycarp, who had been taught by John, who had stood at the foot of the Cross. In his writing, he shows that more than 200 years before the books of the New Testament were formally recognized in the Councils of Hippo (393) and Carthage (397), they were already regarded as Scripture. He quotes extensively from the Gospels and the Epistles – all except Philemon, 2 Peter, 3 John, and Jude. And he is the earliest reference we have to there being four, and only four, accepted Gospels – Matthew, Mark, Luke, and John – and he is very clear about who wrote them, too, connecting them either to the Apostles directly or to their immediate disciples.

"Matthew also issued a written Gospel among the Hebrews in their own dialect, while Peter and Paul were preaching at Rome, and laying the foundations of the Church. After their departure, Mark, the disciple and interpreter of Peter, did also hand down to us in writing what had been preached by Peter. Luke also, the companion of Paul, recorded in a book the Gospel preached by him. Afterwards, John, the disciple of the Lord, who also had leaned upon His breast, did himself publish a Gospel during his residence at Ephesus in Asia." (III.1.1)

And in his efforts to combat the heretical teachings of the Gnostics, he articulates some of the basic tenets of our faith for the first time in writing that has come down to us. For example, the Gnostic idea that the material world is degenerate and corrupt led to a multiplicity of explanations as to who Jesus was vis-à-vis the Son of God. Those messy, fleshly material events in his life, namely his birth and his death, were incompatible with a Gnostic understanding of the world. They just didn’t fit. And more importantly, they could never be considered even remotely connected to our salvation and redemption. Influenced by the need to refute the Gnostics on this point in the most direct way, Irenaeus is the first Christian writer (at least of the works that have come down to us) to focus on the Incarnation and the humanity of Jesus Christ, to articulate these fundamental Christian beliefs and explain how they were an integral part of God’s plan for our salvation. As a human being, Jesus took on the role of the “new Adam”, reversing the consequences of Adam’s disobedience through his obedience. This teaching is based on Romans 5:12-21, and Irenaeus is the first writer to expand on this teaching in this way. He is also the first one to draw the parallels between Mary and Eve which we know so well.

East and West Although Irenaeus is most famous for his writing which set out early orthodox Christian teachings in opposition to those of the heretical groups we call Gnostics, Pope Francis intends to recognize in him an added attribute, one that is sorely needed in the Church today. He intends to give him the title “Doctor of Unity”. As a man who was brought up in the East and carried out his pastoral mission in the West, and who is venerated in both the Roman Catholic and Orthodox traditions, he can become a potent symbol for the unity we seek with our Orthodox brothers and sisters. But perhaps he can be even more than that. We have very few details about the life and work of Irenaeus, but we do know one thing. During this period, there was a dispute over when Easter should be celebrated. Some churches in the East continued to celebrate it on Passover, whatever day of the week that happened to be in a given year, according to ancient custom. However, most bishops agreed that it should be celebrated on a Sunday. Pope Victor felt so strongly about this dispute that he excommunicated the communities which were celebrating Easter on Passover. But some bishops thought this was an extreme reaction, including Irenaeus, who wrote a letter to the pope encouraging him to reconcile and allow for this difference in the celebration of Easter. We would do well to follow the example of Irenaeus (whose name come from eirene, the Greek word for peace) and consider ways in which we disrupt the unity of the Church by unfairly condemning variations in devotional practices or by attempting to prevent people from worshipping and expressing their faith in legitimate ways which are meaningful to them. St. Irenaeus was clearly a man gifted with the ability to recognize the difference between heresy and genuine, legitimate diversity. Let us pray that he will intercede for us and ask our Heavenly Father to grant us this same wisdom.