St. Francis on trial: Lessons for the synod 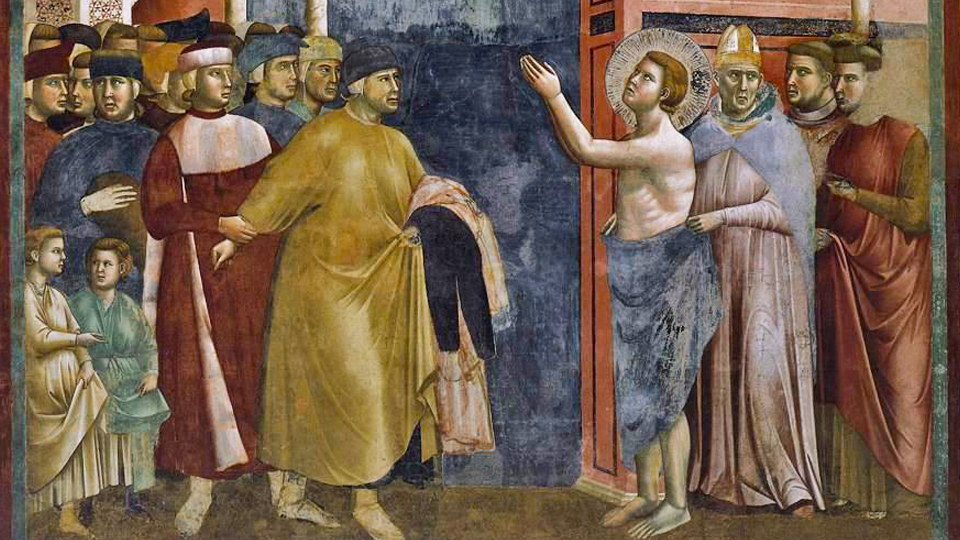 Fresco by Giotto (c. 1267-1337) in the Basilica of St. Francis of Assisi in Assisi, Italy.
There is a famous story in the life of St. Francis of Assisi which goes something like this: Giovanni di Pietro di Bernardone, known to friends and family as Francesco (Francis), was a wealthy and popular young man who enjoyed a party and dreamed of being a great knight. Around the age of 23 or 24, he experienced a conversion of heart. As the young Francis began to change his lifestyle and turn towards God, his father, Pietro di Bernardone, began to feel uncomfortable with his son’s new focus in life. Not only did he give alms to the poor, but he began to look like them, too. And to top it all off, Francis sold his father’s merchandise and his horse in order to pay for repairs to a dilapidated chapel. This was all extremely embarrassing for a man who had a worldly reputation to uphold. At last Pietro, feeling hard done by, brought his son to trial before the bishop, demanding that Francis either return the money he had taken without permission or renounce his inheritance. Francis did both. And to emphasize his point, he removed the clothes he was wearing and returned them, too. Standing naked before his father and the bishop, he publicly renounced Pietro as his father and claimed God for his father instead. From that day on, he began to wear the coarse, simple clothing we know so well and took on permanently the life of a humble beggar and penitent, embracing the life of the poor.

A model of holiness or a lunatic?

At the heart of this story is the shocking radicality of Francis’ spirituality. The personality, character, and spirituality of St. Francis of Assisi should make us uncomfortable. If it doesn’t, we’re either saints already, or, more likely, we are refusing to take him seriously. Francis is one of the most popular saints in the history of the Church, but how many people see him as a harmless lover of animals and nothing more? Imagine in Francis’ place someone you know, or think you know, well. Imagine them voluntarily living on the street. Imagine them stripping naked in a court of law and announcing that from that day forth they will consider only God as their father. Would you go away impressed by their sanctity? Would you think they were gentle and harmless, someone to emulate? Probably not. On the one hand we should have a healthy suspicion of extremes, but on the other hand, we should be wary of that voice inside ourselves that is overly suspicious of religious fervour and that drives us to quench the fire of the Holy Spirit in ourselves and to try to dampen it in the souls of others when we find it there.

I have written before about the dangerous tendency to domesticate the spiritual world. It is this same tendency, I believe, which drives us to tame the message of the Gospel and turn real people with a profound attachment to the person of Jesus Christ and to his teachings into either tropes or superheroes – neither of which should have any influence on how we live our own lives. It’s true that not all of us are called to live a life of radical poverty. St. Francis de Sales, in his Introduction to the Devout Life, comments that some of the saints are more to be admired than imitated, but he also says that though many of us may not be able to imitate the actions of the saints exactly, their example should inspire in us a love of God and a desire to imitate them in the ways we can.

“He went away sad, for he had many possessions.”

When Jesus asks the rich young man in the Gospel to sell all that he has and give it to the poor and to come follow him, he is speaking to every one of us. Some people, like St. Antony of Egypt and St. Francis of Assisi, hear the message in a very literal way. But for every person that call means something different in practical terms. What in this world do you cling to? Is it material wealth? Or popularity? Or vanity? Or pride? What prevents you from following Jesus more closely? And what gifts have you been given that you can share with others but prefer to keep to yourself and for your own benefit? Only you can know the answers to those questions. And like St. Francis, we are all called to a recognition of our poverty before God and a radical abandonment to God’s providence – though that spiritual transformation may manifest itself very differently in tangible ways.

St. Francis and the synod

One of the qualities of young people that comes out strongly in the Instrumentum laboris* of the synod which just began yesterday is a passionate desire for a radical spirituality, a spirituality that truly follows the teachings and example of Jesus Christ. And they look for a similar radicality and authenticity in the Church. But, as the Instrumentum laboris identifies, young people face many challenges, not least of which is the interference of parents and others who should be their guides in the spiritual life but who serve instead as obstacles on the path to holiness. Like Pietro di Bernardone, they are focused on life in this fleeting world. They may even have their children’s best interest in mind as they try to draw them away from spiritual things to focus more on financial and professional success. This is nothing new, as the story of St. Francis’ trial shows.

A final thought and a prayer

It is said that the Bishop of Assisi recognized in Francis’ dramatic act the working of the Holy Spirit and that he wrapped the young man in his own cloak. On a practical level, he was covering his nakedness, but more importantly, on a symbolic level, he was placing him under the Church’s care. As the bishops begin their synod, let us pray, on this feast day of St. Francis of Assisi, that they, too, may recognize the gifts of passion and a desire for radical discipleship that many young people bring to the Church and that they may also recognize their responsibility to protect and nurture these gifts for the renewal and rejuvenation of the whole Church.   *The Instrumentum laboris is the document which sets out the goals of the synod and the topics it will address. It is the fruit of much research and consultation, and it will guide the bishops during their discussion.

Watch our extensive coverage and analysis of the month-long Synod of Bishops on Salt and Light TV, now on free preview. Check your local TV provider for details. For more synod coverage visit: https://saltandlighttv.org/synod/