St. Catherine of Siena and the plague 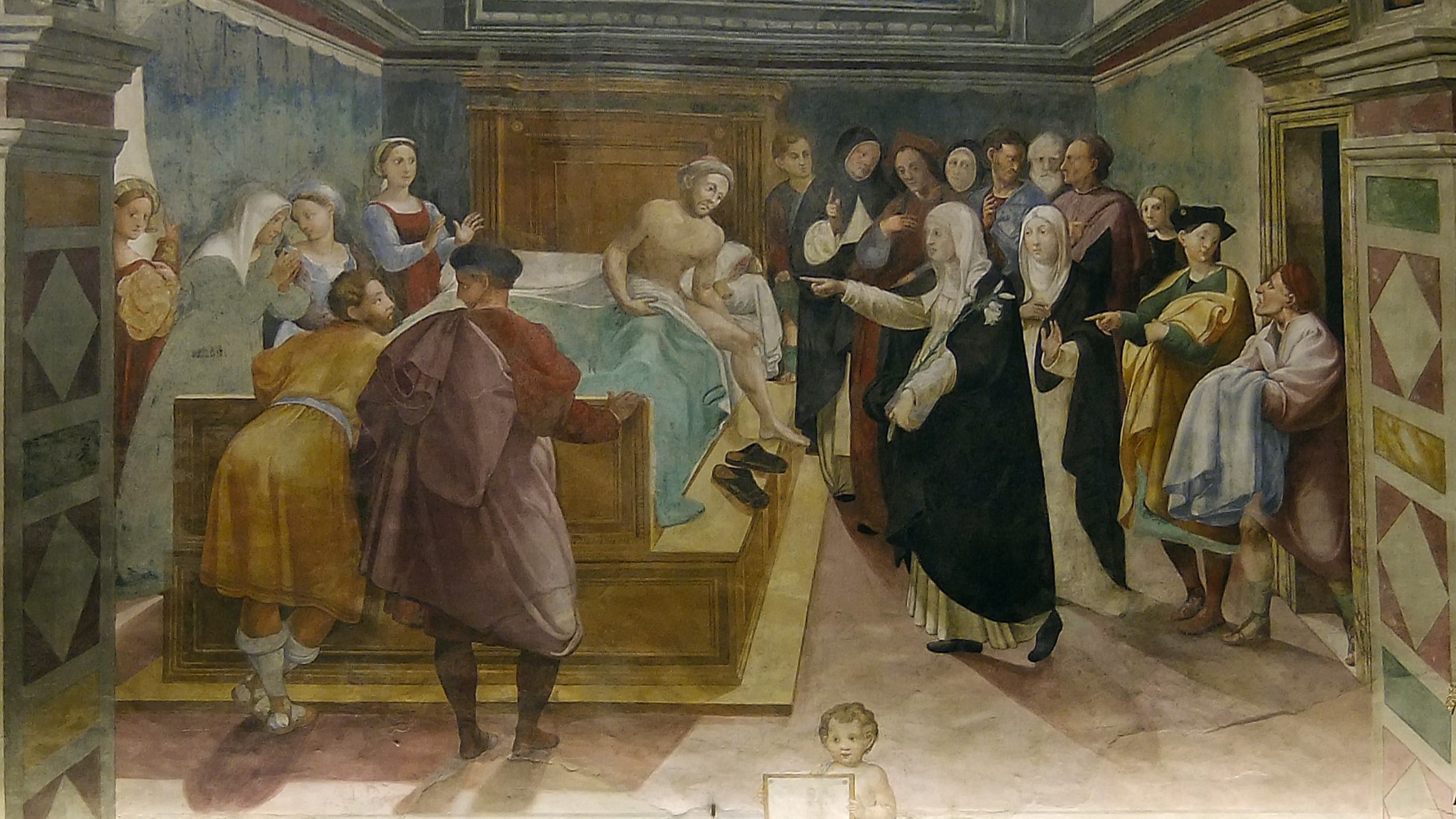 St. Catherine heals Matteo Cenni by Girolamo Del Pacchia, Siena, Italy (Source: Wikimedia Commons)
Today is the feast day of St. Catherine of Siena, a medieval saint and Doctor of the Church best known for her mystical relationship with Jesus Christ. She happens to be a particular favourite of mine since I took her name at my confirmation, but even so, I often find her a difficult person to identify with. She’s one of those saints you look up to but would never dream of imitating. After all, she was having visions and levitating at an age when I struggled with telling the truth and not punching my brothers. But St. Catherine has been on my mind recently and not just because of her feast day. I think we have all been searching our memories lately for saints who lived through (and even died from) outbreaks of terrible diseases – saints like John Bosco and Aloysius Gonzaga and Damien De Veuster. Among these was St. Catherine of Siena, whose hometown experienced its third outbreak of the bubonic plague, or Black Death, in 1374. One of my favourite stories from her biography – written by her friend, spiritual son, and confessor, Blessed Raymond of Capua – comes from this period. A certain Matteo, a holy man and a friend of both Raymond and Catherine, lay dying of this terrible disease which no one could cure. Catherine rushed to see her friend and commanded the plague to leave him – and it obeyed. Raymond, however, happened not to witness this particular miracle, so now he continues the narrative from his own point of view:

After the miracle, the virgin, to avoid being praised, hurried away; but as she was coming out of the house I came in, still very upset, and, not knowing what had happened, and imagining that Matteo was still in the throes of the plague fever, I was so aggrieved when I saw her that I said, rather heatedly, “Mother, are you going to allow this man who is so dear and useful to us to die?” Whereupon, although she knew quite well what had happened, she answered most humbly, almost as though she was offended by what I had said, “What is this you are saying? Do you think I am God, to be able to deliver mortal human beings from death?” At this, being so unhappy, I said shortly, “You can say that to anyone else, but not to me, for I know your secrets, and I know that anything you ask the Lord for is always granted.” Lowering her head, she gave a little smile, then, looking up at me with happiness written all over her face, she said, “Cheer up, he won’t die this time.” At this my sadness left me, for I knew what power had been granted her by heaven…

Two things always strike me about this passage (apart from Raymond’s wonderful storytelling skill, which I envy): The first is the complete understanding that both Raymond and Catherine display regarding the source of the power which appears to be directed through Catherine. The second is Catherine’s simplicity and humility and her simple joy. So often we have a desire to help others, to do some identifiable good. We hate feeling helpless, and we scoff at people who suggest we should pray for those who suffer. Praying is all well and good, but what can I do? Doesn’t the Church after all specify for us corporal works of mercy? And are they not based on words from the very mouth of Jesus (Matthew 25:31-46)? And then when we do pray, we pray for something specific, peeking out through our eyelashes from time to time to see whether our prayers are working – because we want to know that we have done something. I want to know that I have done this through my prayers. But the life of St. Catherine teaches us that this way of approaching prayer is misguided. It is not wrong to ask God for favours. In fact, Jesus tells us we should (Matthew 7:7-11; Luke 11:9-13). But most of us try to skip ahead to this stage of prayer, passing over the difficult but vital foundation: a close relationship with God and a uniting of our petty, individual wills to His great Will. Catherine’s greatest desire was to be united with her Bridegroom, Jesus Christ. Early in life she wanted only to spend time in prayer and had no taste for worldly things. Her family, thinking that she was displaying youthful willfulness and not holiness, took away her bedroom and made sure she had plenty of chores to keep her occupied, but Catherine discovered a way to create a room in her heart where she was always at prayer. At last her family relented (though her mother never really understood), and Catherine was given her heart’s desire. But then one day, Jesus appeared to her and revealed (to Catherine’s dismay) that he desired her now to leave him from time to time in order to engage with the outside world in love of neighbour. So great was her love for her Bridegroom that she threw herself into her new tasks with great energy but also in utter humility. “Let your will, not mine, be done in all things, Lord,” she said. “For I am darkness and you are light; I am not, whereas you are He who is; I most ignorant, and you the wisdom of God the Father.” And here I think is the lesson we can all take away from St. Catherine. We may not be called to great penances or visions. But we are all called to obedience, abandonment, and humility. We are all called to love God and love neighbour. I think sometimes when we don’t know what to do, when we feel helpless or like we’re not doing enough, it’s because we’re asking the right question but the wrong person. When I ask myself, “What should I do?” I usually come up blank, and that’s frustrating. Or else I barge into a situation with confidence only to find out later that I was getting it all wrong. But when we ask God and learn to wait and listen for His answer, we cannot be led astray. For the cares of the world, which we try to carry, were never made to fit our shoulders anyway. I think this is one of those aspects of faith which is the hardest – the living what I profess to believe. Because, you see, as with so many hundreds of saints, the good that Catherine was able to do flowed out of her love, her trust, her faith in God because she did not put up barriers to prevent His working through her. God has a plan greater than any of us could ever imagine, and each one of us has a place in that plan. The real difference between me and St. Catherine is not that she performed greater penances or prayed more or consumed nothing but the Eucharist while I am rather attached to earthly food. It is that in emptying herself of all vanity and all self-will, she allowed herself to be a conduit for the power of God working in the world and I resist. I try to do things my way, on my own, as I see fit. St. Catherine shows us that we are called to something greater – nothingness. St. Catherine of Siena, pray for us!