Servant of Joy: Homily for the Funeral of Jean-Claude Cardinal Turcotte 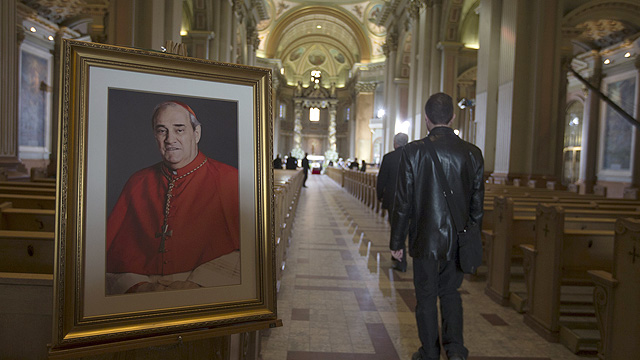 Friday, April 17, 2015 Below you will find the homily of Archbishop Christian Lepine at the funeral of Cardinal Turcotte.

You have come in great numbers to Mary Queen of the World Cathedral to honour Jean-Claude Cardinal Turcotte and to pray for him. Many of you are also taking part in this celebration via various broadcast technologies.
Our brother Jean-Claude ended his earthly pilgrimage last week when he passed away after a lengthy illness. At the end of a lifetime of service, he departed discreetly, surrounded by his family, to meet the Risen Christ. He has gathered us here today, though we are grief-stricken and are called to have hope.
Our existence in this world is not a life rooted in death but a life rooted in infinite love, which enriches us in this life and, in eternity, fills us with happiness.
This vision of life is rooted in Jesus Christ, who came into this world to reveal to us divine beauty, truth, goodness and unity.
Let us recall the Risen Christ when he appeared to the Apostles, and how they loved him and acknowledged that he was truly the Messiah, the Son of God. After having been slow to believe, they were overwhelmed with a joy that filled their hearts. They could feel the power of the Good Shepherd's love when he said to them: "All authority in heaven and on earth has been given to me," and he gave them the mission to go forth and proclaim the Good News of Salvation. 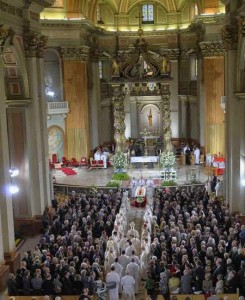 The Apostles' mission was centred on Jesus. For before Christ returned to his Father after his resurrection, he entrusted them with the mission to proclaim to all humanity "what they had heard, what they had seen with their eyes, what they had looked at and touched with their hands, concerning the Word of Life."
The Church, the Apostles and their successors – the bishops – receive the mission to proclaim Jesus Christ; they start with Jesus Christ and they rely on Jesus Christ, he who promised to always be present: "And remember, I am with you always, to the end of the age."
Following the Apostles, Cardinal Turcotte rooted himself in Christ and chose as his episcopal motto, "Serve the Lord with Joy," in the joy of the resurrection. At every stage of his life, he was seen as a servant of the Lord who made Jesus and Gospel values better known.
Over the past few days, following his death, many news reports, articles and testimonies have drawn attention to his qualities as a good communicator, a man close to the people, and as someone who never strayed from his family, social or spiritual roots. It has been said that, given his simple, straightforward approach, he had the ability to strike up conversation easily with people from all walks of life. He wanted to be of service to everyone by spreading God's goodness.
All this had its source in his daily celebration of Mass. Through the window of his private chapel, he would watch as people walked along the sidewalk on their way to work and he would pray for them. He was a man whose life was Eucharist-centred, who, with his priestly heart, commended every person to the mercy of our God, who actively seeks us.
Being a man of prayer is how he ensured a fruitful ministry, for he remained continuously connected to the inexhaustible source, namely, Jesus Christ. His episcopal ministry and his wisdom in governing God's people were born of his close communion with the Lord. Up to the end, Cardinal Turcotte wanted to celebrate the Eucharist, the presence of the living Christ.
To get closer to Jesus Christ is to get closer to the mystery of God, but also closer to being human, to one's own humanity and to the humanity of the other, whomever he or she might be. He was interested in everything that is part of human life, with its joys and its pain. 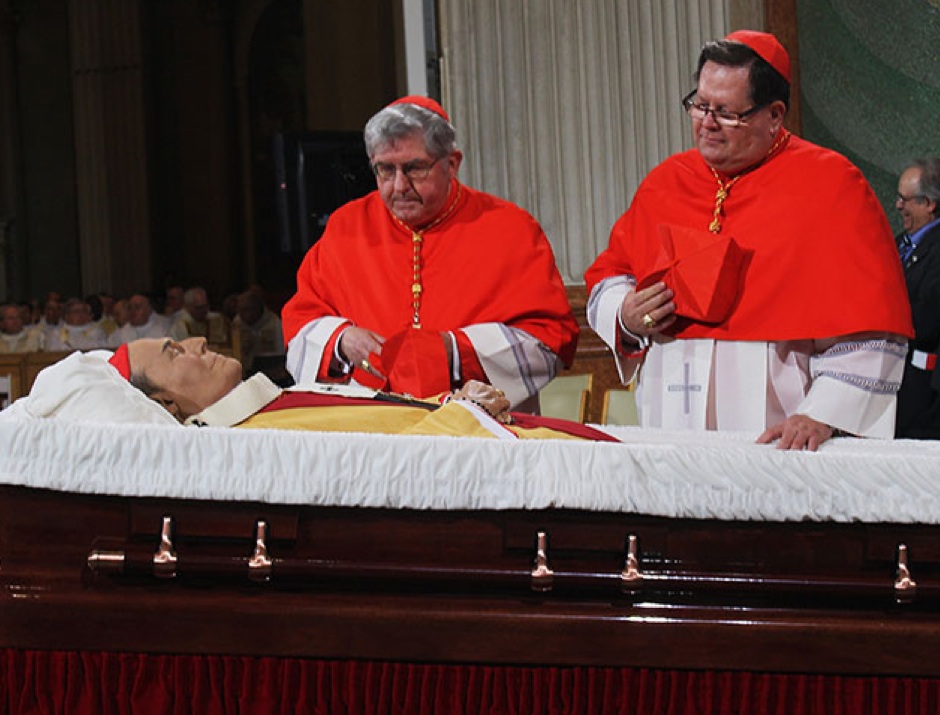 In the vast area of social justice and solidarity, he wanted ever so humbly to make his contribution. Fully aware of his limitations and of those of the Church, he strove to ensure that the Church always went to great lengths to be close to the poor and attentive to every kind of poverty.
On his deathbed, his humanity shone forth in the gratitude he expressed toward everyone who attended to his health: the volunteers, orderlies, nurses, doctors and members of the religious communities. He insisted on recognizing their help and dedication.
The time has now come for Cardinal Turcotte to meet the Good Shepherd, whom he strove to follow and imitate. Today, we commend him to God’s mercy and we pray for him. We thank our Lord for having given us a servant who served with joy, who endeavoured to ensure that the Church was of service to society, and who often gathered us in this very cathedral around the Eucharist.
Jesus Christ, crucified and risen, we believe you are "the Lord" and that you are among us. We give you thanks for your presence among us and for the gift of your Word. Guide us through this difficult time for we are losing a man of prayer and service who has touched many people.
This is a time when our human words are inadequate to express the mystery of your call, addressed uniquely to each one of us. We ask you to speak to our hearts and to reveal yourself through the presence of your Holy Spirit, the Consoler. We ask you to bless our words so that through them we might be instruments of your Peace and your solace; You, who live with the Father and the Holy Spirit forever and ever. Amen