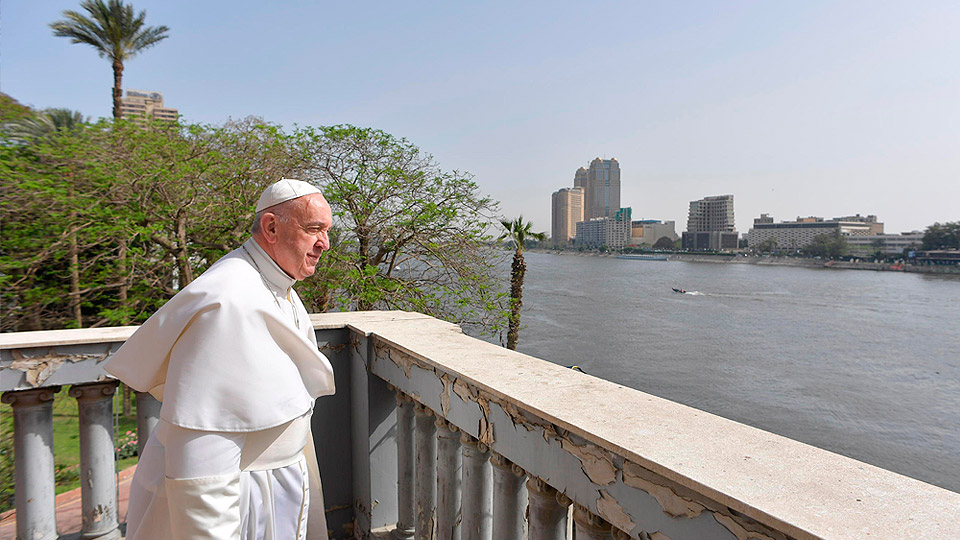 CNS photo/L'Osservatore Romano, handout
This weekend, Pope Francis completed a two day apostolic visit to Egypt, a trip loaded with meaning and symbolism. In this post, you'll find everything you need to know about the Pope's visit and we begin with Italian producer Matteo Ciofi here: Find out what Pope Francis' Trip to Egypt means.

On April 28, 2017, the Holy Father kicked off his journey to Egypt with a welcome ceremony at the Cairo airport, followed by  a visit with the Egyptian President Abdel Fattah el-Sisi in the Presidential Palace. Following his private visit with President Abdel Fattah el-Sisi, the Pope paid a courtesy visit to the Grand Imam of Al-Azhar, the highest theological and religious institution of Sunni Islam in the world and the oldest Islamic University. He attended a special International Conference on Peace. The conference was scheduled at the same time as the Holy Father's visit at Al-Azhar University. Prior to Pope Francis' discourse, the Grand Imam spoke and praised Al-Azhar University for its dedication "to work and cooperate for the calls of establishing coexistence, reviving dialogue, respecting all human beliefs, and protecting them." Read the Grand Imam's address in full here. After the Grand Imam's address, the Holy Father spoke, emphasizing the importance of Egypt's identity as a 'land of Civilizations and a land of Covenants.' He said:

Together, in the land where heaven and earth meet, this land of covenants between peoples and believers, let us say once more a firm and clear “No!” to every form of violence, vengeance and hatred carried out in the name of religion or in the name of God. Together let us affirm the incompatibility of violence and faith, belief and hatred. Together let us declare the sacredness of every human life against every form of violence, whether physical, social, educational or psychological. Unless it is born of a sincere heart and authentic love towards the Merciful God, faith is no more than a conventional or social construct that does not liberate man, but crushes him. Let us say together: the more we grow in the love of God, the more we grow in the love of our neighbour.

Read Pope Francis' full address during the International Conference of Peace here. Pope Francis continued Day 1 of his Apostolic Visit to Egypt with a meeting with Egyptian civil and political authorities. During his address, the Pope described and praised Egypt's unique presence. He said:

Thanks to its history and its particular geographical location, Egypt has a unique role to play in the Middle East and among those countries seeking solutions to pressing and complex problems that need to be faced now in order to avoid the spread of worse violence. I am speaking of the blind and brutal violence caused by different factors: sheer desire for power, the arms trade, grave social problems and that religious extremism which uses the Holy Name of God to carry out unprecedented atrocities and injustices.

Read Pope Francis' full address to the Egyptian civil and political authorities here. Immediately following his meeting with Egyptian authorities, the Holy Father paid a courtesy visit to His Holiness Pope Tawadros II, Patriarch of the Coptic-Orthodox Church of Alexandria. After delivering his prepared remarks, Pope Francis and Pope Tawadros II both signed a Join Declaration agreement to engage in common prayer once more. Read the full text of the Common Declaration of His Holiness Francis and His Holiness Tawadros II here. The next day, April 29, 2017, Pope Francis continued the second and final day of his visit to Egypt with the celebration of Holy Mass for Egyptian Catholics in the “Air Defense Stadium” in Cairo. In his homily, the Holy Father spoke on the Gospel reading of the Road to Emmaus, highlighting the journey to Jerusalem in three words - death, resurrection and life. He continued:

The two disciples are returning, full of despair and disappointment, to life as usual. The Master is dead and thus it is pointless to hope. They feel disappointment and despair. Theirs is a journey of return, as they leave behind the painful experience of Jesus’ crucifixion. The crisis of the cross, indeed the “scandal” and “foolishness” of the cross (cf. 1 Cor 1:18, 2:2), seems to have buried any hope they had. The one on whom they had built their lives is dead; in his defeat, he brought all their aspirations with him to the tomb... How often do we paralyze ourselves by refusing to transcend our own ideas of God, a god created in the image and likeness of man! How often do we despair by refusing to believe that God’s omnipotence is not one of power and authority, but rather of love, forgiveness and life!

Read the full text of the Pope Francis' homily here. Following the conclusion of Mass and before departing for Rome once again, Pope Francis briefly participated in a Prayer Meeting with clergy, men and women religious and seminarians. His discourse highlighted seven temptations consecrated men and women often face, including the temptation to complain, to gossip, and envy, the temptation of comparison and individualism. The full text of his address can be found here. After a brief farewell ceremony at the airport where Pope Francis bid adieu to Egypt, he departed for Rome and held his now-traditional in-flight presser.

Watch each of these events here!