Unofficially, it’s called the “state of the world” address. 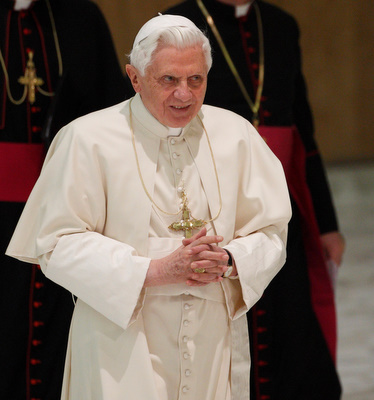 Officially, it’s Pope Benedict XVI’s annual talk to the diplomatic corps. And representatives from the 178 states that have diplomatic ties to the Holy See gathered this morning at the Vatican for the address. Religious freedom was the key issue that the Holy Father discussed. He singled out the persecution of Christians in Iraq, Egypt and Nigeria. He denounced the blasphemy law in Pakistan saying it may be used as an “excuse to cause injustice and violence”. He also expressed concern for the Catholic community of mainland China, the marginalization of religion from public life, the right of religious communities to be involved in education, the threat of a person’s right to conscientious objection, and the tendency to consider religion as destabilizing to modern society. The Pope concluded: “religion does not represent a problem for society,” “it is not a source of discord or conflict. ... I would repeat that the Church seeks no privileges, nor does she seek to intervene in areas unrelated to her mission, but simply to exercise the latter with freedom. You can see the diplomat address, with English translation, Tuesday, January 11th, at 3:30pm ET. See the text below:

ADDRESS OF HIS HOLINESS POPE BENEDICT XVI TO THE MEMBERS OF THE DIPLOMATIC CORPS Regia Hall, Monday, 10 January 2011 Your Excellencies, Ladies and Gentlemen, I am pleased to welcome you, the distinguished representatives of so many countries, to this meeting which each year assembles you around the Successor of Peter. It is a deeply significant meeting, since it is a sign and illustration of the place of the Church and of the Holy See in the international community. I offer my greetings and cordial good wishes to each of you, and particularly to those who have come for the first time. I am grateful to you for the commitment and interest with which, in the exercise of your demanding responsibilities, you follow my activities, those of the Roman Curia and thus, in some sense, the life of the Catholic Church throughout the world. Your Dean, Ambassador Alejandro Valladares Lanza, has interpreted your sentiments and I thank him for the good wishes which he has expressed to me in the name of all. Knowing how close-knit your community is, I am certain that today you are also thinking of the Ambassador of the Kingdom of the Netherlands, Baroness van Lynden-Leijten, who several weeks ago returned to the house of the Father. I prayerfully share your sentiments. Continue reading