Pope: Jews not to blame for crucifixion - Excerpt from Jesus of Nazareth, Part Two

Who killed Jesus? From the Gospels, we know that he was crucified directly by Roman soldiers. But those who want to attribute blame for his death have drawn in a wider pool of suspects: Judas Iscariot, Pontius Pilate, the Jewish people, and all of humanity. The question of Jewish culpability in "deicide" is particularly charged, given that it has historically been used to justify anti-Semitic violence. 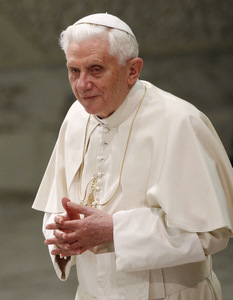 Pope Benedict has already demonstrated his commitment to Jewish-Christian relations during his visits to synagogues in Cologne, New York City and Rome, and through his trip to Israel in 2009. Now he is presenting the theological case against blaming Jews for the death of Jesus. In the second volume of “Jesus of Nazareth”, which will be released by Ignatius Press on March 10th, the Pope explains a contentious passage in the Gospel of Matthew. In it, the Jewish crowd shouts, “Let his blood be on us and on our children,” as they demand that Pilate execute Jesus. Yet the Pope insists that the crowd represents all humanity. Further, Jesus’ blood was not “poured out against anyone, it is poured out for many, for all.” Jesus’ blood can never be a curse, “but rather redemption, salvation.” Posted with permission is an excerpt from the forthcoming book "Jesus of Nazareth, Part Two - Holy Week: From the Entrance into Jerusalem to the Resurrection". In the coming days, the S+L blog will post two more excerpts.