Pope in Egypt: Address at International Conference of Peace 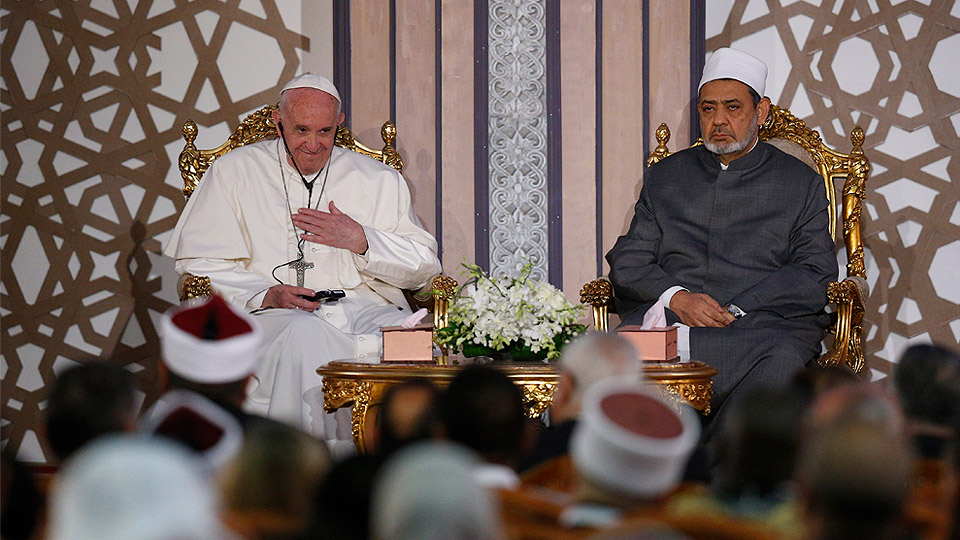 At 3:40 pm this afternoon, Pope Francis went paid a courtesy visit to the Grand Imam of Al-Azhar, the highest theological and religious institution of Sunni Islam in the world and the oldest Islamic University. Upon his arrival, the Pope was received at the entrance by the Vicar of the Grand Imam who accompanied him to the study where the private encounter with the Grand Imam Shaykh Ahmad Al-Tayeb took place. At the end of the visit, the exchange of gifts took place. The Pope then went to the Al-Azhar Conference Center to address the participants at the International Peace Conference. Upon arrival in the Conference Center, , Pope Francis was welcomed by the Gramd Imam. Present were Egyptian Religious Leaders and those other countries, a large representation of teachers and students from the Islamic university and a group of children from 60 nations. After the Grand Imam's speech, the Holy Father addresses the audience. Below are the Grand Imam’s address to the Pope and the full text of Pope Francis’ address to the International Peace Conference:

A land of civilizations

From ancient times, the culture that arose along the banks of the Nile was synonymous with civilization. Egypt lifted the lamp of knowledge, giving birth to an inestimable cultural heritage, made up of wisdom and ingenuity, mathematical and astronomical discoveries, and remarkable forms of architecture and figurative art. The quest for knowledge and the value placed on education were the result of conscious decisions on the part of the ancient inhabitants of this land, and were to bear much fruit for the future. Similar decisions are needed for our own future, decisions of peace and for peace, for there will be no peace without the proper education of coming generations. Nor can young people today be properly educated unless the training they receive corresponds to the nature of man as an open and relational being. Education indeed becomes wisdom for life if it is capable of “drawing out” of men and women the very best of themselves, in contact with the One who transcends them and with the world around them, fostering a sense of identity that is open and not self-enclosed. Wisdom seeks the other, overcoming temptations to rigidity and closed-mindedness; it is open and in motion, at once humble and inquisitive; it is able to value the past and set it in dialogue with the present, while employing a suitable hermeneutics. Wisdom prepares a future in which people do not attempt to push their own agenda but rather to include others as an integral part of themselves. Wisdom tirelessly seeks, even now, to identify opportunities for encounter and sharing; from the past, it learns that evil only gives rise to more evil, and violence to more violence, in a spiral that ends by imprisoning everyone. Wisdom, in rejecting the dishonesty and the abuse of power, is centred on human dignity, a dignity which is precious in God’s eyes, and on an ethics worthy of man, one that is unafraid of others and fearlessly employs those means of knowledge bestowed on us by the Creator. Precisely in the field of dialogue, particularly interreligious dialogue, we are constantly called to walk together, in the conviction that the future also depends on the encounter of religions and cultures. In this regard, the work of the Mixed Committee for Dialogue between the Pontifical Council for Interreligious Dialogue and the Committee of Al-Azhar for Dialogue offers us a concrete and encouraging example. Three basic areas, if properly linked to one another, can assist in this dialogue: the duty to respect one’s own identity and that of others, the courage to accept differences, and sincerity of intentions. The duty to respect one’s own identity and that of others, because true dialogue cannot be built on ambiguity or a willingness to sacrifice some good for the sake of pleasing others. The courage to accept differences, because those who are different, either culturally or religiously, should not be seen or treated as enemies, but rather welcomed as fellow-travellers, in the genuine conviction that the good of each resides in the good of all. Sincerity of intentions, because dialogue, as an authentic expression of our humanity, is not a strategy for achieving specific goals, but rather a path to truth, one that deserves to be undertaken patiently, in order to transform competition into cooperation. An education in respectful openness and sincere dialogue with others, recognizing their rights and basic freedoms, particularly religious freedom, represents the best way to build the future together, to be builders of civility. For the only alternative to the civility of encounter is the incivility of conflict. To counter effectively the barbarity of those who foment hatred and violence, we need to accompany young people, helping them on the path to maturity and teaching them to respond to the incendiary logic of evil by patiently working for the growth of goodness. In this way, young people, like well-planted trees, can be firmly rooted in the soil of history, and, growing heavenward in one another’s company, can daily turn the polluted air of hatred into the oxygen of fraternity. In facing this great cultural challenge, one that is both urgent and exciting, we, Christians, Muslims and all believers, are called to offer our specific contribution: “We live under the sun of the one merciful God... Thus, in a true sense, we can call one another brothers and sisters... since without God the life of man would be like the heavens without the sun”.2 May the sun of a renewed fraternity in the name of God rise in this sun-drenched land, to be the dawn of a civilization of peace and encounter. May Saint Francis of Assisi, who eight centuries ago came to Egypt and met Sultan Malik al Kamil, intercede for this intention.

A land of covenants