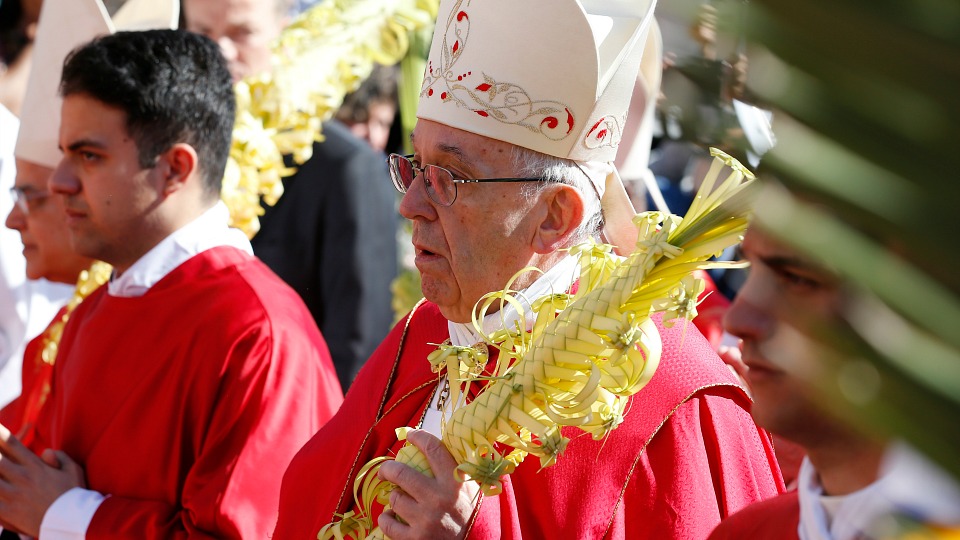 CNS photo/Paul Haring
Homily of His Holiness Pope Francis Palm Sunday 9 April 2017 Today’s celebration can be said to be bittersweet. It is joyful and sorrowful at the same time. We celebrate the Lord’s entrance into Jerusalem to the cries of his disciples who acclaim him as king. Yet we also solemnly proclaim the Gospel account of his Passion. In this poignant contrast, our hearts experience in some small measure what Jesus himself must have felt in his own heart that day, as he rejoiced with his friends and wept over Jerusalem. For thirty-two years now, the joyful aspect of this Sunday has been enriched by the enthusiasm of young people, thanks to the celebration of World Youth Day. This year, it is being celebrated at the diocesan level, but here in Saint Peter’s Square it will be marked by the deeply moving and evocative moment when the WYD cross is passed from the young people of Kraków to those of Panama. The Gospel we heard before the procession (cf. Mt 21:1-11) describes Jesus as he comes down from the Mount of Olives on the back of a colt that had never been ridden. It recounts the enthusiasm of the disciples who acclaim the Master with cries of joy, and we can picture in our minds the children and young people of the city who joined in the excitement. Jesus himself sees in this joyful welcome an inexorable force willed by God. To the scandalized Pharisees he responds: “I tell you that if these were silent, the stones would shout out” (Lk 19:40). Yet Jesus who, in fulfilment of the Scriptures, enters the holy city in this way is no misguided purveyor of illusions, no new age prophet, no imposter. Rather, he is clearly a Messiah who comes in the guise of a servant, the servant of God and of man, and goes to his passion. He is the great “patient”, who suffers all the pain of humanity. So as we joyfully acclaim our King, let us also think of the sufferings that he will have to endure in this week. Let us think of the slanders and insults, the snares and betrayals, the abandonment to an unjust judgment, the blows, the lashes and the crown of thorns… And lastly, the way of the cross leading to the crucifixion. He had spoken clearly of this to his disciples: “If any want to become my followers, let them deny themselves and take up their cross and follow me” (Mt 16:24). Jesus never promised honour and success. The Gospels make this clear. He had always warned his friends that this was to be his path, and that the final victory would be achieved through the passion and the cross. All this holds true for us too. Let us ask for the grace to follow Jesus faithfully, not in words but in deeds. Let us also ask for the patience to carry our own cross, not to refuse it or set it aside, but rather, in looking to him, to take it up and to carry it daily. This Jesus, who accepts the hosannas of the crowd, knows full well that they will soon be followed by the cry: “Crucify him!” He does not ask us to contemplate him only in pictures and photographs, or in the videos that circulate on the internet. No. He is present in our many brothers and sisters who today endure sufferings like his own: they suffer from slave labour, from family tragedies, from diseases… They suffer from wars and terrorism, from interests that are armed and ready to strike. Women and men who are cheated, violated in their dignity, discarded… Jesus is in them, in each of them, and, with marred features and broken voice, he asks to be looked in the eye, to be acknowledged, to be loved. It is not some other Jesus, but the same Jesus who entered Jerusalem amid the waving of palm branches. It is the same Jesus who was nailed to the cross and died between two criminals. We have no other Lord but him: Jesus, the humble King of justice, mercy and peace.