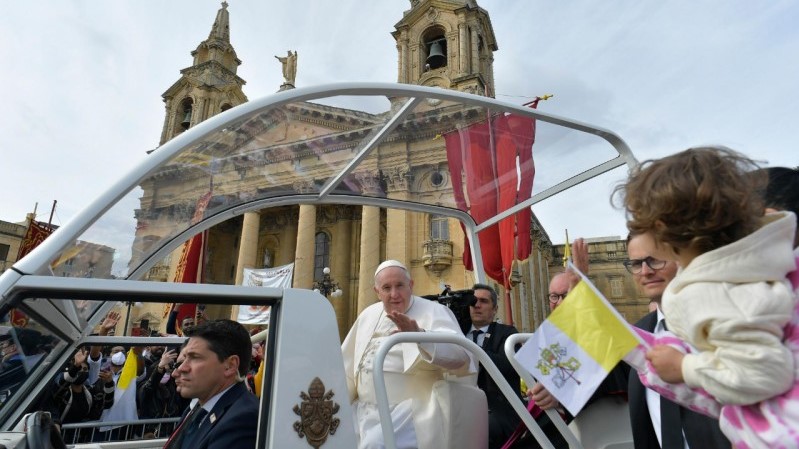 Pope Francis arrives for Mass in The Granaries in the city of Floriana on April 3, 2022, during his apostolic visit to Malta. Photo courtesy of Vatican Media.

On Sunday, April 3, the second day of his apostolic visit to Malta, Pope Francis celebrated Mass for the Fifth Sunday of Lent at The Granaries in the city of Floriana. Situated in front of the Church of St. Publius, The Granaries – also known by its official name: Pjazza San Publju (St. Publius Square) – is one of the largest urban public spaces in Malta. It was here that Pope John Paul II, on his second apostolic visit to Malta in 2001, beatified three Maltese, including Saint Gorg Preca, Malta's first modern saint (1880–1962). Read below the full text of the homily Pope Francis gave on this occasion:

“Early in the morning Jesus came again to the temple; all the people came to him” (Jn 8:2). These words introduce the story of the woman caught in adultery. The background is serene: it is morning in the holy place, in the heart of Jerusalem. At the centre is the people of God, who are looking for Jesus, the Master, in the courtyard of the temple: they want to listen to him, because his words are insightful and heartwarming. There is nothing abstract in his teaching; it touches, frees, transforms and renews real life. Here we see the “intuition” of the people of God; they are not satisfied with the temple built of stones, but flock around the person of Jesus. In this passage, we can see the believers of every age, the holy people of God. Here in Malta, that people is numerous and lively, faithful in seeking the Lord through a concrete, lived faith. For this, I thank all of you. In the presence of those people, Jesus takes his time: the Gospel tells us that, “he sat down and taught them” (v. 2). Yet, there are empty seats in that school of Jesus. Absent are the woman and her accusers. Unlike the others, they did not go to the Master. They all have their reasons: the scribes and the Pharisees think that they already know everything and do not need the teaching of Jesus; the woman, on the other hand, is lost and confused, someone who went astray looking for happiness in the wrong places. They were absent for different reasons, and the story will end differently for each of them. Let us reflect on these “absentees”. 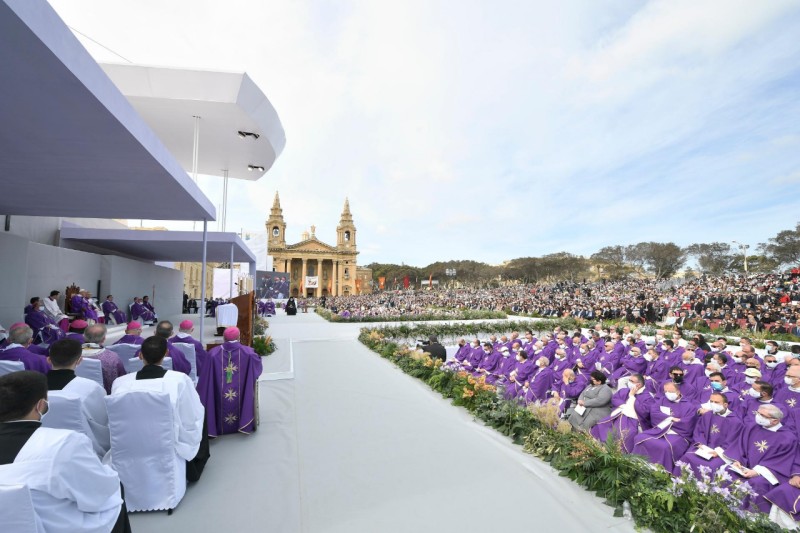 Pope Francis celebrates Mass in The Granaries in the city of Floriana on April 3, 2022, during his apostolic visit to Malta. Photo courtesy of Vatican Media.
First of all, let us consider the accusers of the woman. In them, we see a reflection of all those who pride themselves on being righteous, observers of God’s law, decent and respectable people. They disregard their own faults, yet they are very concerned about those of others. They go to Jesus: not with open hearts to hear his words, but “to test him and to have some charge to bring against him” (v. 6). This reveals the inner thoughts of these cultivated and religious people, who know the Scriptures and visit the temple, yet subordinate this to their personal interests and do not resist the evil thoughts brewing in their hearts. In the eyes of the people, they appear to be experts in things of God, yet they fail to recognize Jesus; indeed, they view him as an enemy to be eliminated. To achieve this, they set before him someone they scornfully refer to as “this woman”, treating her as a thing, and publicly denouncing her adultery. They call for the woman to be stoned, and pour out on her all their hostility to the compassion shown by Jesus. And they do so under the cloak of their reputation as devout and religious men. Brothers and sisters, these Gospel personages remind us that at any time our individual and communal religiosity can conceal the worm of hypocrisy and the urge to point the finger at others. We can always run the risk of failing to understand Jesus, of having his name on our lips but denying him by the way that we live. Even as we raise banners displaying the cross. How, then, can we prove whether not we are true disciples of the Master? We do so by the way we regard our neighbour and the way we regard ourselves. This is an important point in the definition of who we are. By the way we regard our neighbour: whether we do this with a look of mercy, as Jesus shows us today, or with a look of judgement, even contempt, like the accusers of the Gospel, who present themselves as God’s defenders but who fail to realize that they are trampling on their sisters and brothers. Those who believe they are upholding the faith by pointing their finger at others may have a certain “religiosity”, but they have not embraced the spirit of the Gospel, for they disregard mercy, which is the heart of God. 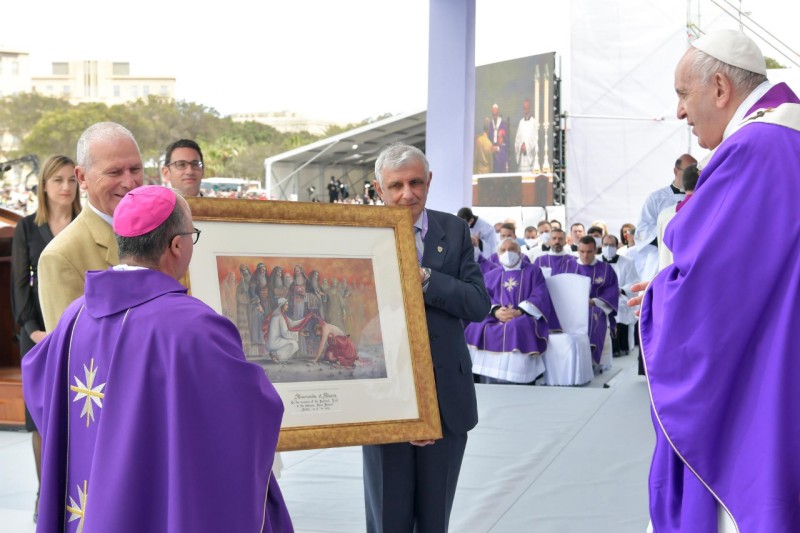 Archbishop Charles Scicluna and representatives of the people of Malta present Pope Francis with a gift at the end of Mass in Floriana on April 3, 2022, during the Holy Father's apostolic visit to Malta. Photo courtesy of Vatican Media.
To understand whether we are true disciples of the Master or not, we need to think about how we view ourselves. The accusers of the woman were convinced that they had nothing to learn. Their outward appearance was impeccable, yet they lacked the truth of the heart. They represent those believers who in every age make faith part of their façade; they present an impressive and solemn exterior, yet they lack interior poverty, the greatest treasure of the human heart. For Jesus, what really counts is openness and docility on the part of those who do not consider themselves secure, but recognize their need for salvation. It is good for us then, whenever we pray, but also whenever we participate in lovely religious services, to ask ourselves if we are truly attuned to the Lord. We can ask him straightaway, “Jesus, here I am with you, but what is it that you want from me? What is in my heart, in my life, that you want me to change? How do you want me to regard others?” Praying like that will do us good, because the Master is not content with appearances; he seeks the truth of the heart. Once we open our hearts to him in truth, he can work wonders in us. We see this in the woman caught in adultery. Her situation seemed hopeless, but then a new and unexpected horizon opened up before her. She was insulted and awaiting merciless judgment and severe punishment. Yet to her amazement, she finds herself acquitted by God, who points her to a future she did not at all anticipate: “Has no one condemned you?” – Jesus says to her – “Neither do I condemn you; go, and do not sin again” (vv. 10.11). What a difference there is between the Master and the woman’s accusers! They cited the Scriptures to condemn her; Jesus, the very Word of God, completely rehabilitates the woman, restoring her hope. From this story, we learn that any judgment that is not inspired and moved by charity only serves to make things worse for those who receive it. God, on the other hand, always leaves room for second chance; he can always find paths that lead to liberation and salvation. 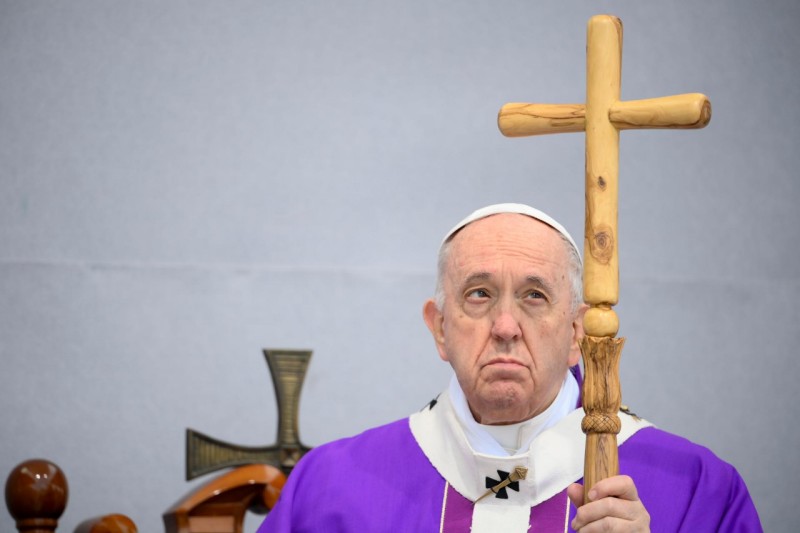 Pope Francis celebrates Mass in The Granaries in the city of Floriana on April 3, 2022, during his apostolic visit to Malta. Photo courtesy of Vatican Media.
Forgiveness changed that woman’s life. Mercy and misery embraced. Mercy and misery met there, and the woman’s life changed. We can even speculate whether, after being forgiven by Jesus, she was able in turn to forgive others. Perhaps she even came to see her accusers no longer as harsh and wicked men, but as the means that led to her encounter with Jesus. The Lord also wants us, his disciples, his Church, likewise forgiven by him, to become tireless witnesses of reconciliation. Witnesses of a God for whom the word “irredeemable” does not exist, a God who always forgives. God always forgives. We are the ones who get tired of asking for forgiveness. Our God is a God who never stops believing in us and always gives us a chance to start anew. There is no sin or failure that we can bring before him that cannot become the opportunity for starting to live a new and different life under the banner of mercy. There is no sin that cannot be treated in this manner. God forgives everything. He forgives every sin. This is the Lord Jesus. We truly know him when we experience his forgiveness, and when, like the woman in the Gospel, we discover that God comes to us through our inner woundedness. That is indeed where the Lord loves to make himself known, for he came not for the healthy but for the sick (cf. Mt 9:12). Today, that woman, who found mercy amid her misery and who went away healed by Jesus’ forgiveness, invites us, as Church, to return to the school of the Gospel, to learn from the God of hope who never ceases to surprise us. If we imitate him, we will not be inclined to focus on condemning sins, but on setting out with love in search of sinners. We will not be content with those already present, but will go out in search of those absent. We will not go back to pointing fingers, but will start listening. We will not discard the despised, but view as first those whom others consider least. Brothers and sisters, this is what Jesus teaches us today by his example. Let us allow him to amaze us. Let us joyfully welcome the good news he brings. Text courtesy of Libreria Editrice Vaticana