Pope Francis' homily for the Solemnity of Saints Peter and Paul 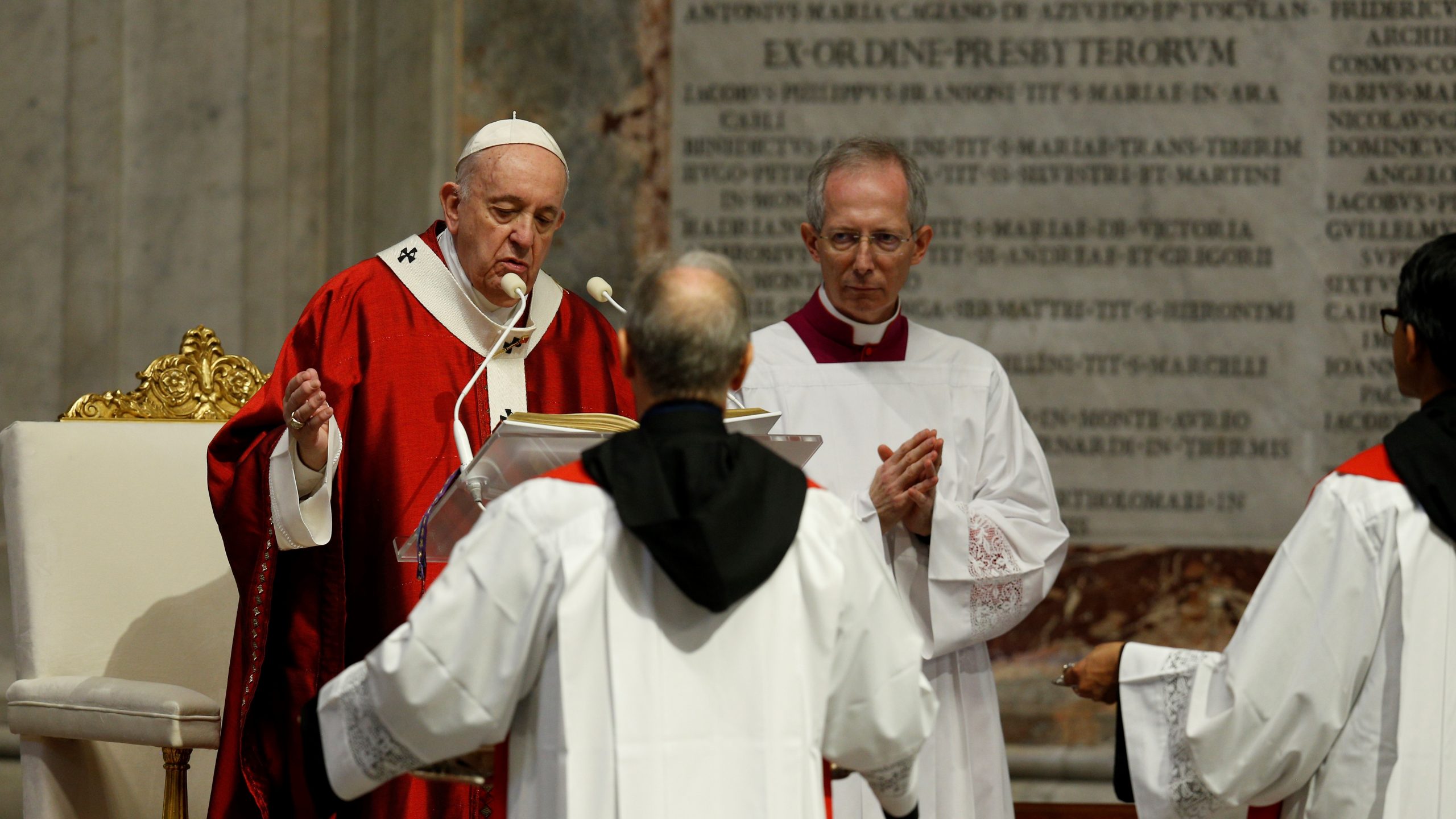 Pope Francis blesses pallia as he celebrates Mass marking the feast of Sts. Peter and Paul in St. Peter's Basilica at the Vatican on June 29, 2020. (CNS photo/Paul Haring)

Holy Mass and Blessing of the Sacred Pallium for the New Metropolitan Archbishops on the Solemnity of Saints Peter and Paul, Apostles Monday, 29 June 2020

On the feast of the two Apostles of this City, I would like to share with you two key words: unity and prophecy. Unity. We celebrate together two very different individuals: Peter, a fisherman who spent his days amid boats and nets, and Paul, a learned Pharisee who taught in synagogues. When they went forth on mission, Peter spoke to Jews, and Paul to pagans. And when their paths crossed, they could argue heatedly, as Paul is unashamed to admit in one of his letters (cf. Gal 2:11). In short, they were two very different people, yet they saw one another as brothers, as happens in close-knit families where there may be frequent arguments but unfailing love. Yet the closeness that joined Peter and Paul did not come from natural inclinations, but from the Lord. He did not command us to like one another, but to love one another. He is the one who unites us, without making us all alike. He unites us in our differences. Today’s first reading brings us to the source of this unity. It relates how the newly born Church was experiencing a moment of crisis: Herod was furious, a violent persecution had broken out, and the Apostle James had been killed. And now Peter had been arrested. The community seemed headless, everyone fearing for his life. Yet at that tragic moment no one ran away, no one thought about saving his own skin, no one abandoned the others, but all joined in prayer. From prayer they drew strength, from prayer came a unity more powerful than any threat. The text says that, “while Peter was kept in prison, the Church prayed fervently to God for him” (Acts 12:5). Unity is the fruit of prayer, for prayer allows the Holy Spirit to intervene, opening our hearts to hope, shortening distances and holding us together at times of difficulty. 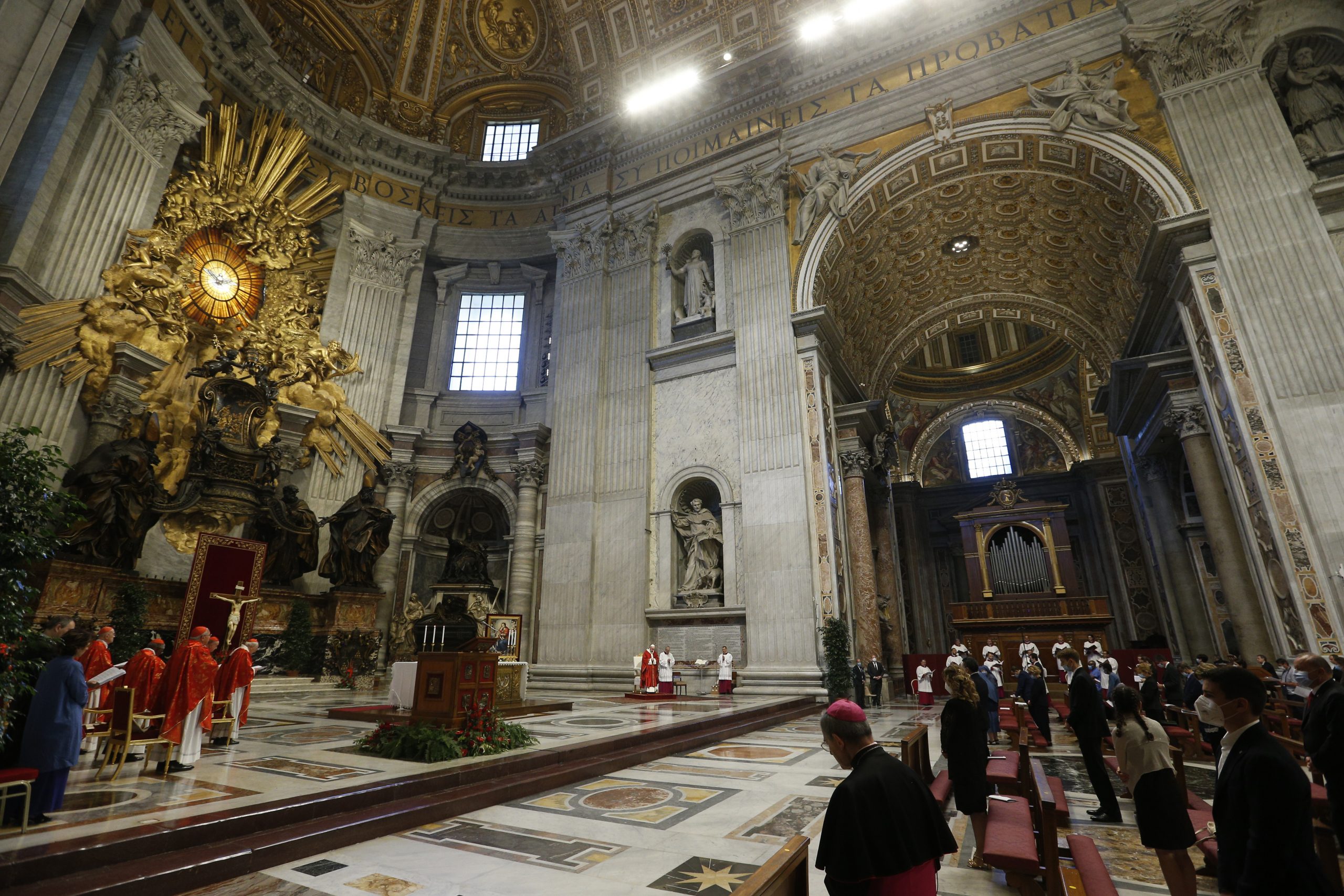 Pope Francis celebrates Mass marking the feast of Sts. Peter and Paul in St. Peter's Basilica at the Vatican on June 29, 2020. (CNS photo/Paul Haring)
Let us notice something else: at that dramatic moment, no one complained about Herod’s evil and his persecution. No one abused Herod – and we are so accustomed to abuse those who are in charge. It is pointless, even tedious, for Christians to waste their time complaining about the world, about society, about everything that is not right. Complaints change nothing. Let us remember that complaining is the second door that closes us off from the Holy Spirit, as I said on Pentecost Sunday. The first is narcissism, the second discouragement, the third pessimism. Narcissism makes you look at yourself constantly in a mirror; discouragement leads to complaining and pessimism to thinking everything is dark and bleak. These three attitudes close the door to the Holy Spirit. Those Christians did not cast blame; rather, they prayed. In that community, no one said: “If Peter had been more careful, we would not be in this situation”. No one. Humanly speaking, there were reasons to criticize Peter, but no one criticized him. They did not complain about Peter; they prayed for him. They did not talk about Peter behind his back; they talked to God. We today can ask: “Are we protecting our unity, our unity in the Church, with prayer? Are we praying for one another?” What would happen if we prayed more and complained less, if we had a more tranquil tongue? The same thing that happened to Peter in prison: now as then, so many closed doors would be opened, so many chains that bind would be broken. We would be amazed, like the maid who saw Peter at the gate and did not open it, but ran inside, astonished by the joy of seeing Peter (cf. Acts 12:10-17). Let us ask for the grace to be able to pray for one another. Saint Paul urged Christians to pray for everyone, especially those who govern (cf. 1 Tim 2:1-3). “But this governor is…”, and there are many adjectives. I will not mention them, because this is neither the time nor the place to mention adjectives that we hear directed against those who govern. Let God judge them; let us pray for those who govern! Let us pray: for they need prayer. This is a task that the Lord has entrusted to us. Are we carrying it out? Or do we simply talk, abuse and do nothing? God expects that when we pray we will also be mindful of those who do not think as we do, those who have slammed the door in our face, those whom we find it hard to forgive. Only prayer unlocks chains, as it did for Peter; only prayer paves the way to unity. Today we bless the pallia to be bestowed on the Dean of the College of Cardinals and the Metropolitan Archbishops named in the last year. The pallium is a sign of the unity between the sheep and the Shepherd who, like Jesus, carries the sheep on his shoulders, so as never to be separated from it. Today too, in accordance with a fine tradition, we are united in a particular way with the Ecumenical Patriarchate of Constantinople. Peter and Andrew were brothers, and, whenever possible, we exchange fraternal visits on our respective feast days. We do so not only out of courtesy, but as a means of journeying together towards the goal that the Lord points out to us: that of full unity. We could not do so today because of the difficulty of travel due to the coronavirus, but when I went to venerate the remains of Peter, in my heart I felt my beloved brother Bartholomew. They are here, with us. The second word is prophecy. Unity and prophecy. The Apostles were challenged by Jesus. Peter heard Jesus’ question: “Who do you say I am?” (cf. Mt 16:15). At that moment he realized that the Lord was not interested in what others thought, but in Peter’s personal decision to follow him. Paul’s life changed after a similar challenge from Jesus: “Saul, Saul, why do you persecute me?” (Acts 9:4). The Lord shook Paul to the core: more than just knocking him to the ground on the road to Damascus, he shattered Paul’s illusion of being respectably religious. As a result, the proud Saul turned into Paul, a name that means “small”. These challenges and reversals are followed by prophecies: “You are Peter, and on this rock I will build my Church” (Mt 16:18); and, for Paul: “He is a chosen instrument of mine to carry my name before the Gentiles and kings and the sons of Israel” (Acts 9:15). Prophecy is born whenever we allow ourselves to be challenged by God, not when we are concerned to keep everything quiet and under control. Prophecy is not born from my thoughts, from my closed heart. It is born if we allow ourselves to be challenged by God. When the Gospel overturns certainties, prophecy arises. Only someone who is open to God’s surprises can become a prophet. And there they are: Peter and Paul, prophets who look to the future. Peter is the first to proclaim that Jesus is “the Christ, the Son of the living God” (Mt 16:16). Paul, who considers his impending death: “From now on there is laid up for me the crown of righteousness, which the Lord will award to me” (2 Tim 4:8). 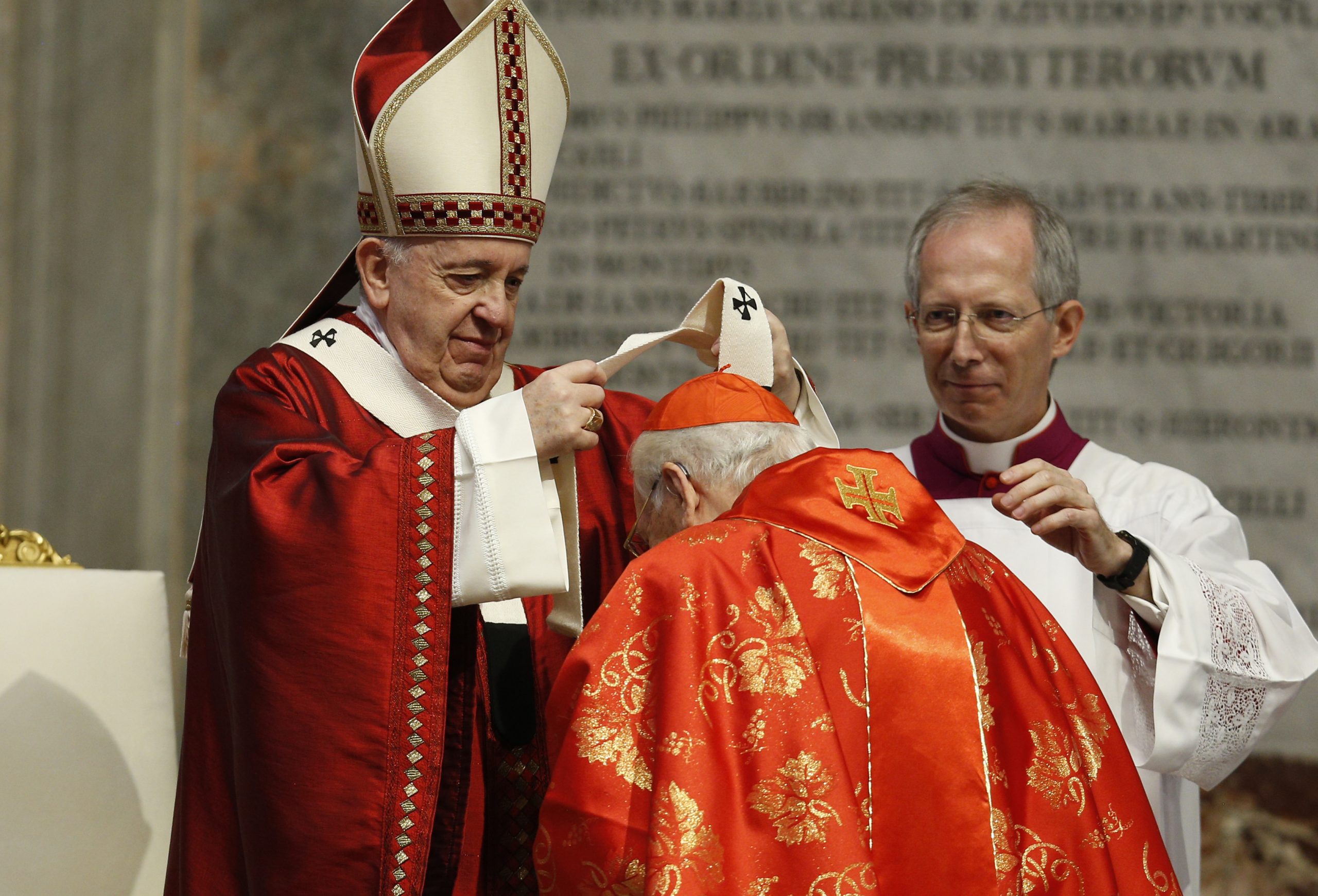 Pope Francis places a pallium on Cardinal Giovanni Battista Re, dean of the College of Cardinals, as he celebrates Mass marking the feast of Sts. Peter and Paul in St. Peter's Basilica at the Vatican on June 29, 2020. (CNS photo/Paul Haring)
Today we need prophecy, but real prophecy: not fast talkers who promise the impossible, but testimonies that the Gospel is possible. What is needed are not miraculous shows. It makes me sad when I hear someone say, “We want a prophetic Church”. All right. But what are you doing, so that the Church can be prophetic? We need lives that show the miracle of God’s love. Not forcefulness, but forthrightness. Not palaver, but prayer. Not speeches, but service. Do you want a prophetic Church? Then start serving and be quiet. Not theory, but testimony. We are not to become rich, but rather to love the poor. We are not to save up for ourselves, but to spend ourselves for others. To seek not the approval of this world, of being comfortable with everyone - here we say: “being comfortable with God and the devil”, being comfortable with everyone -; no, this is not prophecy. We need the joy of the world to come. Not better pastoral plans that seem to have their own self-contained efficiency, as if they were sacraments; efficient pastoral plans, no. We need pastors who offer their lives: lovers of God. That is how Peter and Paul preached Jesus, as men in love with God. At his crucifixion, Peter did not think about himself but about his Lord, and, considering himself unworthy of dying like Jesus, asked to be crucified upside down. Before his beheading, Paul thought only of offering his life; he wrote that he wanted to be “poured out like a libation” (2 Tim 4:6). That was prophecy. Not words. That was prophecy, the prophecy that changed history. Dear brothers and sisters, Jesus prophesied to Peter: “You are Peter and on this rock I will build my Church”. There is a similar prophecy for us too. It is found in the last book of the Bible, where Jesus promises his faithful witnesses “a white stone, on which a new name is written” (Rev 2:17). Just as the Lord turned Simon into Peter, so he is calling each one of us, in order to make us living stones with which to build a renewed Church and a renewed humanity. There are always those who destroy unity and stifle prophecy, yet the Lord believes in us and he asks you: “Do you want to be a builder of unity? Do you want to be a prophet of my heaven on earth?” Brothers and sisters, let us be challenged by Jesus, and find the courage to say to him: “Yes, I do!” Text courtesy of Libreria Editrice Vaticana (click here for original source) 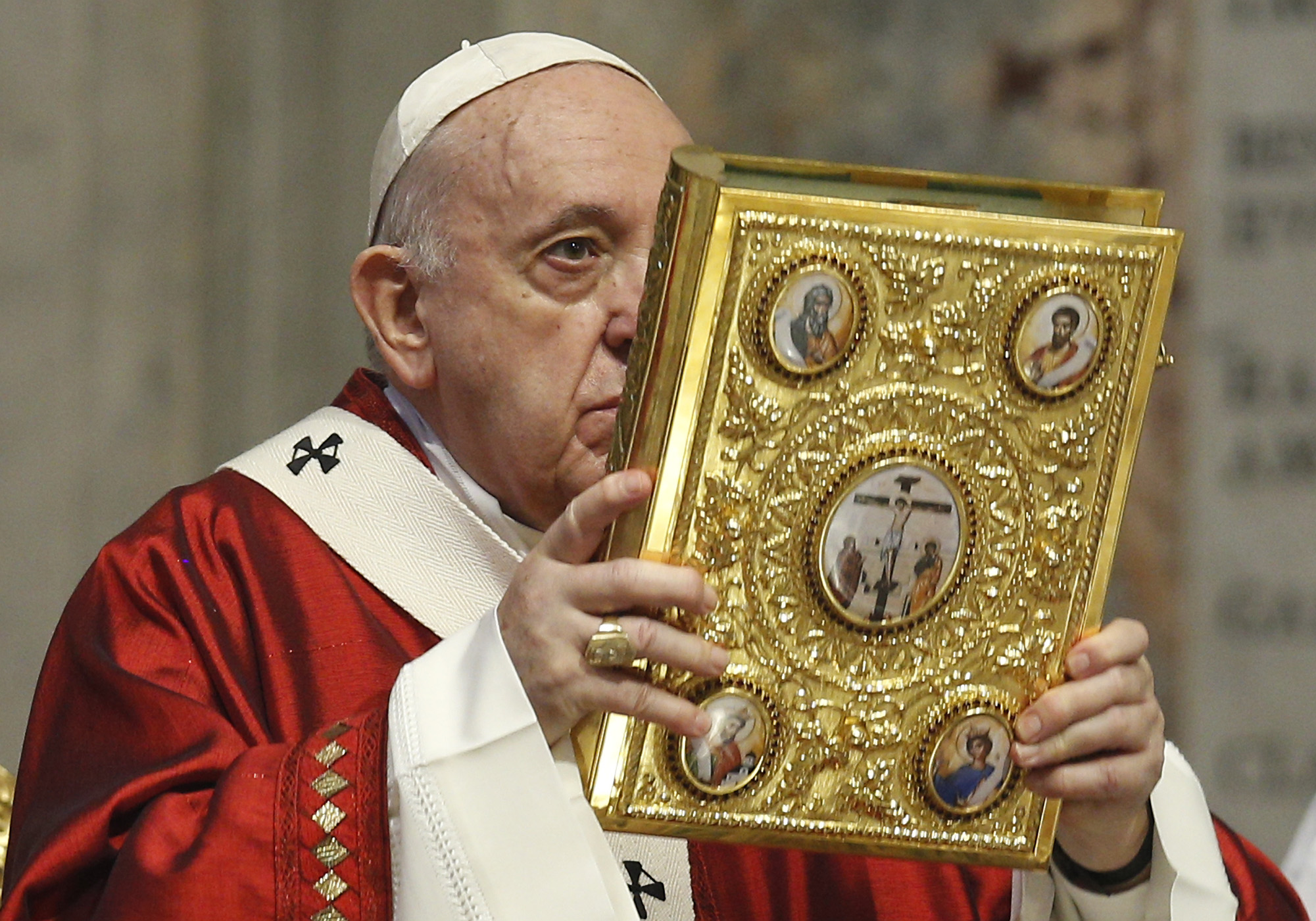 Pope Francis holds the Book of the Gospels as he celebrates Mass marking the feast of Sts. Peter and Paul in St. Peter's Basilica at the Vatican on June 29, 2020. (CNS photo/Paul Haring)