Pope Francis' homily for the Solemnity of Mary, Mother of God 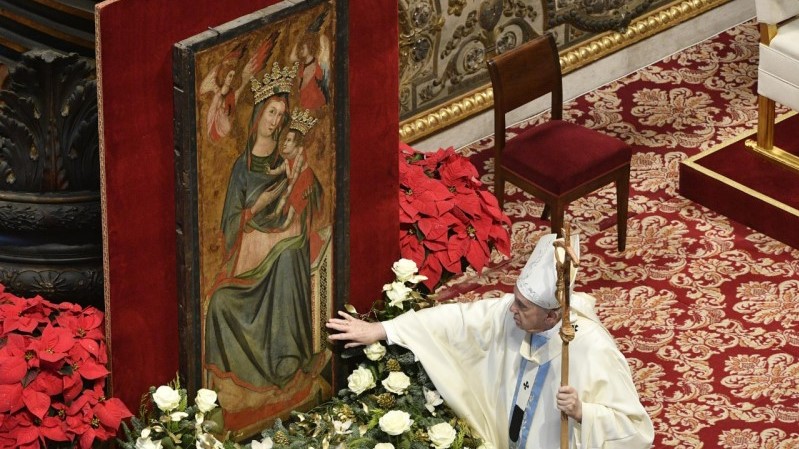 Pope Francis celebrates Mass for the Solemnity of Mary, Mother of God, in St. Peter's Basilica in the Vatican on January 1, 2022. Photo courtesy of Vatican Media.

On January 1, 2022, Pope Francis celebrated Mass for the Solemnity of Mary, Mother of God, in St. Peter's Basilica in the Vatican. January 1st has also been commemorated as the World Day of Peace since 1968. Read the full text of the Holy Father's homily below:

The shepherds found “Mary and Joseph, and the child lying in the manger” (Lk 2:16). For the shepherds, the manger was a joyful sign: it was the confirmation of the message they had heard from the angel (cf. v. 12), the place where they found the Saviour. It is also the proof of God’s closeness to them, for he was born in a manger, an object they know well, as a sign of his closeness and familiarity. The manger is also a joyful sign for us. Jesus touches our hearts by being born in littleness and poverty; he fills us with love, not fear. The manger foretells the One who makes himself food for us.  His poverty is good news for everyone, especially the marginalized, the rejected and those who do not count in the eyes of the world. For that is how God comes: not on a fast track, and lacking even a cradle! That is what is beautiful about seeing him there, laid in a manger. Yet such was not the case with Mary, the Holy Mother of God. She had to endure “the scandal of the manger”. She too, long before the shepherds, had received the message of an angel, who spoke to her solemnly about the throne of David: “You will conceive in your womb and bear a son, and you will name him Jesus. He will be great, and will be called the Son of the Most High, and the Lord God will give to him the throne of his ancestor David” (Lk 1:31-32). And now, Mary has to lay him in a trough for animals. How can she hold together the throne of a king and the lowly manger? How can she reconcile the glory of the Most High and the bitter poverty of a stable? Let us think of the distress of the Mother of God. What can be more painful for a mother than to see her child suffering poverty? It is troubling indeed. We would not blame Mary, were she to complain of those unexpected troubles. Yet she does not lose heart. She does not complain, but keeps silent. Rather than complain, she chooses a different part: For her part, the Gospel tells us, Mary “kept all these things, pondering them in her heart” (cf. Lk 2:19). 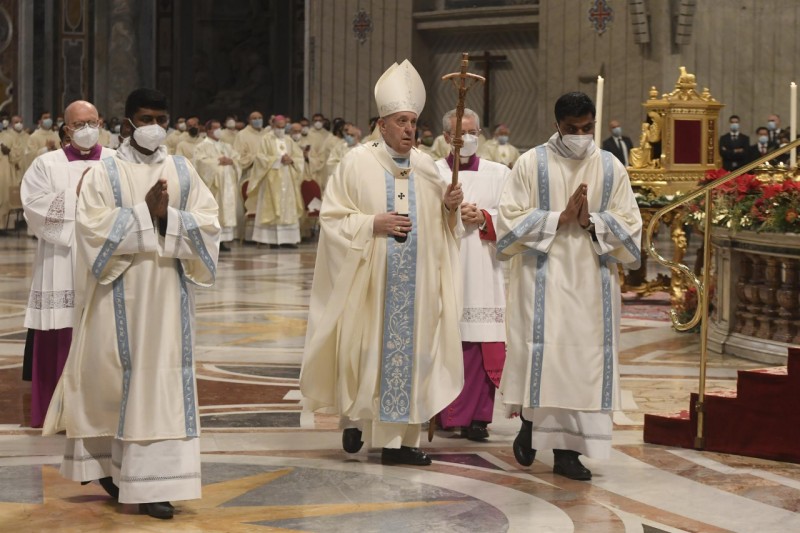 Pope Francis celebrates Mass for the Solemnity of Mary, Mother of God, in St. Peter's Basilica in the Vatican on January 1, 2022. Photo courtesy of Vatican Media.
That is not what the shepherds and the people do. The shepherds tell everyone about what they had seen: the angel that appeared in the heart of the night, and his words concerning the Child. And the people, upon hearing these things, are amazed (cf. v. 18). Words and amazement. Mary, instead, is pensive; she keeps all these things, pondering them in her heart. We ourselves can have the same two different responses. The story told by the shepherds, and their own amazement, remind us of the beginnings of faith, when everything seems easy and straightforward. We rejoice in the newness of God who enters into our lives and fills us with wonder. Mary’s pensiveness, on the other hand, is the expression of a mature, adult faith, not a faith of beginners. Not a newborn faith, it is rather a faith that now gives birth. For spiritual fruitfulness is born of trials and testing. From the quiet of Nazareth and from the triumphant promises received by the Angel – the beginnings – Mary now finds herself in the dark stable of Bethlehem. Yet that is where she gives God to the world. Others, before the scandal of the manger, might feel deeply troubled. She does not: she keeps those things, pondering them in her heart. Let us learn from the Mother of God how to have that same attitude: to keep and to ponder. Because we may well have to endure certain “scandals of the manger”. We hope that everything will be all right and then, like a bolt from the blue, an unexpected problem arises. Our expectations clash painfully with reality. That can also happen in the life of faith, when the joy of the Gospel is put to the test in troubling situations. Today the Mother of God teaches us to draw profit from this clash. She shows us that it is necessary: it is the narrow path to achieve the goal, the cross, without which there can be no resurrection. Like the pangs of childbirth, it begets a more mature faith. I ask, brothers and sisters, how do we make this passage, how do we surmount this clash between the ideal and the real? By doing exactly what Mary did: by keeping and by pondering. First, Mary “keeps”, that is she holds on to what happens; she does not forget or reject it. She keeps in her heart everything that she saw and heard. The beautiful things, like those spoken to her by the angel and the shepherds, but also the troubling things: the danger of being found pregnant before marriage and, now, the lowly stable where she has had to give birth. That is what Mary does. She does not pick and choose; she keeps. She accepts life as it comes, without trying to camouflage or embellish it; she keeps those things in her heart. 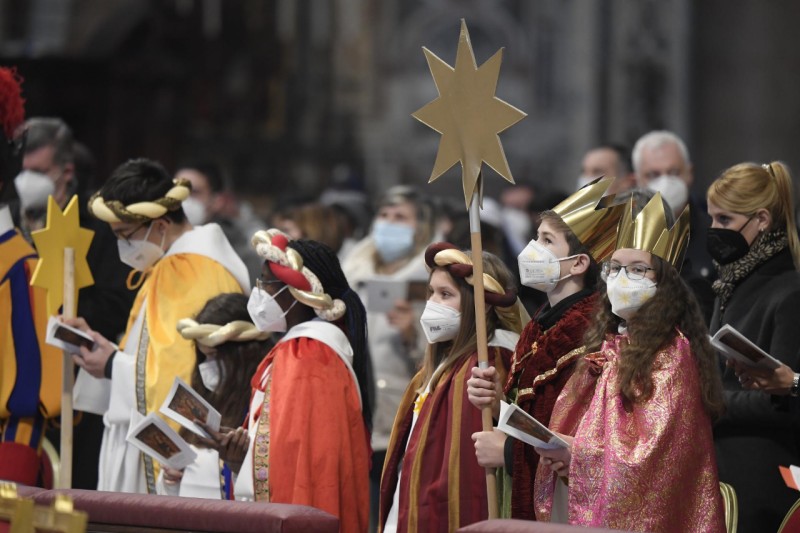 Pope Francis celebrates Mass for the Solemnity of Mary, Mother of God, in St. Peter's Basilica in the Vatican on January 1, 2022. Photo courtesy of Vatican Media.
Then, Mary’s second attitude is about how she keeps: she keeps and she ponders. The Gospel speaks of Mary “bringing together”, comparing, her different experiences and finding the hidden threads that connect them. In her heart, in her prayer, she does exactly that: she binds together the beautiful things and the unpleasant things. She does not keep them apart, but brings them together. It is for this reason that Mary is said to be the Mother of Catholicity. In this regard, we can dare to say that it is because of this that Mary is said to be Catholic, for she unites, she does not divide.  And in this way she discerns their greater meaning, from God’s perspective. In her mother’s heart, Mary comes to realize that the glory of the Most High appears in humility; she welcomes the plan of salvation whereby God must lie in a manger. She sees the divine Child frail and shivering, and she accepts the wondrous divine interplay between grandeur and littleness. Mary keeps and ponders. This inclusive way of seeing things, which transcends tensions by “keeping” and “pondering”, is the way of mothers, who, in moments of tension, do not divide, they keep, and in this way enable life to grow. It is the way so many mothers embrace the problems of their children. Their maternal “gaze” does not yield to stress; it is not paralyzed before those problems, but sees them in a wider perspective. And this is Mary’s attitude: she keeps and ponders right up to Calvary. We can think of the faces of all those mothers who care for a child who is ill or experiencing difficulties. What great love we see in their eyes! Even amid their tears, they are able to inspire hope. Theirs is a gaze that is conscious and realistic, but at the same time offering, beyond the pain and the problems, a bigger picture, one of care and love that gives birth to new hope. That is what mothers do: they know how to overcome obstacles and disagreements, and to instill peace. In this way, they transform problems into opportunities for rebirth and growth. They can do this because they know how to “keep”, to hold together the various threads of life. We need such people, capable of weaving the threads of communion in place of the barbed wire of conflict and division. Mothers know how to do this. 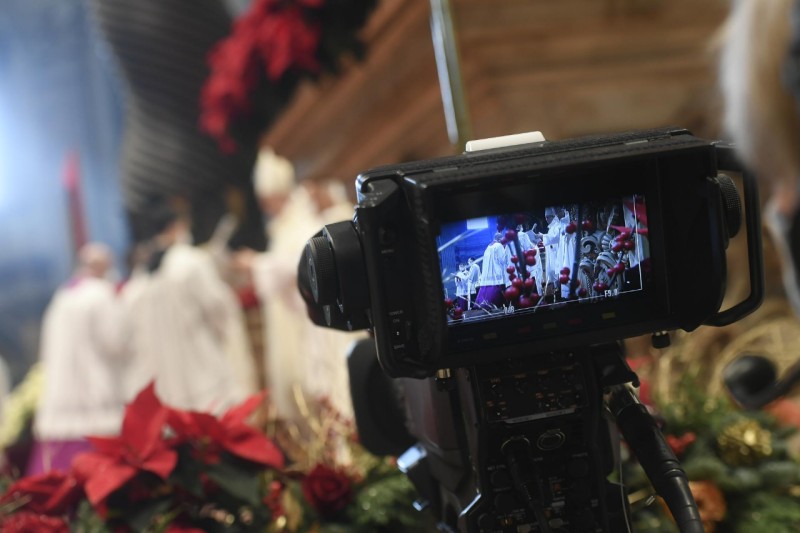 Pope Francis celebrates Mass for the Solemnity of Mary, Mother of God, in St. Peter's Basilica in the Vatican on January 1, 2022. Photo courtesy of Vatican Media.
The New Year begins under the sign of the Holy Mother of God, under the sign of the Mother. A mother’s gaze is the path to rebirth and growth.  We need mothers, women who look at the world not to exploit it, but so that it can have life. Women who, seeing with the heart, can combine dreams and aspirations with concrete reality, without drifting into abstraction and sterile pragmatism. And the Church is a Mother, this is what makes the Church feminine. For this reason, we cannot find a place for women in the Church without allowing the heart of the Woman and Mother to shine. This is the place of women in the Church, the great place, from which other places, more concrete and less important, are derived. But the Church is Mother, the Church is woman. And since mothers bestow life, and women “keep” the world, let us all make greater efforts to promote mothers and to protect women. How much violence is directed against women! Enough! To hurt a woman is to insult God, who from a woman took on our humanity. He did not do it through an angel; nor did he come directly; he did it through a woman. Like a woman, the Mother Church takes the humanity of her sons and daughters. At the beginning of the New Year, then, let us place ourselves under the protection of this woman, the Mother of God, who is also our mother. May she help us to keep and ponder all things, unafraid of trials and with the joyful certainty that the Lord is faithful and can transform every cross into a resurrection. Today too, let us call upon her as did the People of God at Ephesus. Let us stand and, facing Our Lady as did the people of God in Ephesus, let us together repeat three times her title of Mother of God: “Holy Mother of God, Holy Mother of God, Holy Mother of God”! Amen. Text courtesy of Libreria Editrice Vaticana