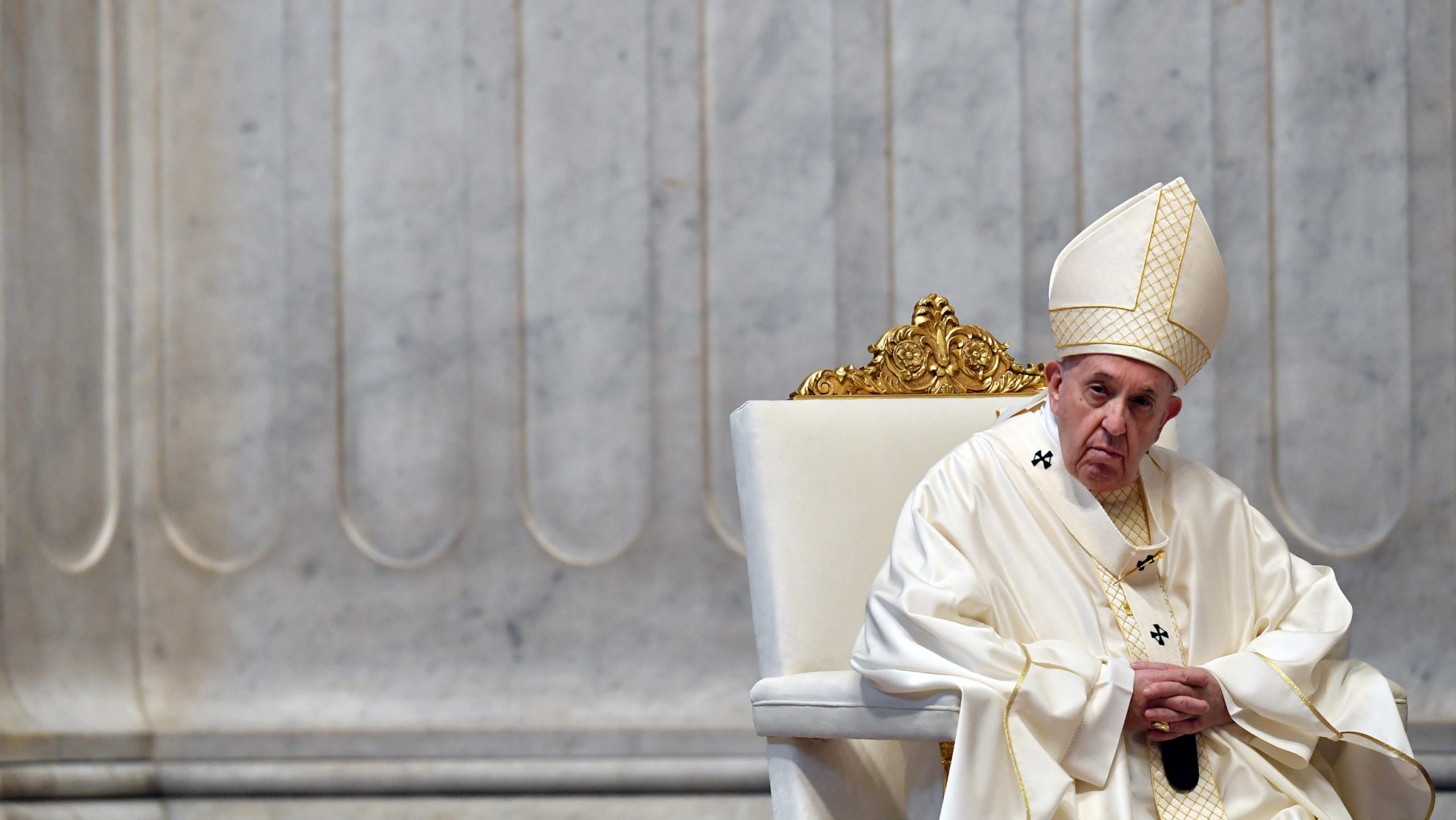 Pope Francis celebrates the Mass of the Lord's Supper on April 9, 2020, in St. Peter's Basilica at the Vatican. (CNS photo/Alessandro Di Meo, pool via Reuters)


Homily of His Holiness Pope Francis

Eucharist, service, anointing. This is what we experience in today’s celebration: the Lord who wants to remain with us in the Eucharist. And we become the Lord’s tabernacles, carrying the Lord with us; to the point that he himself tells us: if we do not eat his body and drink his blood, we will not enter the kingdom of heaven. This is a mystery, bread and wine, the Lord with us, within us, inside us. Service. This gesture is the condition to enter the kingdom of heaven. Yes, to serve... everyone. But the Lord, in the words he exchanged with Peter (cf. Jn 13:6-9), makes him realize that to enter the kingdom of heaven we must let the Lord serve us, that the servant of God be our servant. And this is hard to understand. If I do not let the Lord be my servant, do not let allow the Lord wash me, help me grow, forgive me, then I will not enter the kingdom of heaven. And the priesthood too. Today I would like to be close to priests, to all priests, from the most recently ordained right up to the Pope. We are all priests. The bishops too, all of us... we are anointed, anointed by the Lord; anointed to confect the Eucharist, anointed to serve. 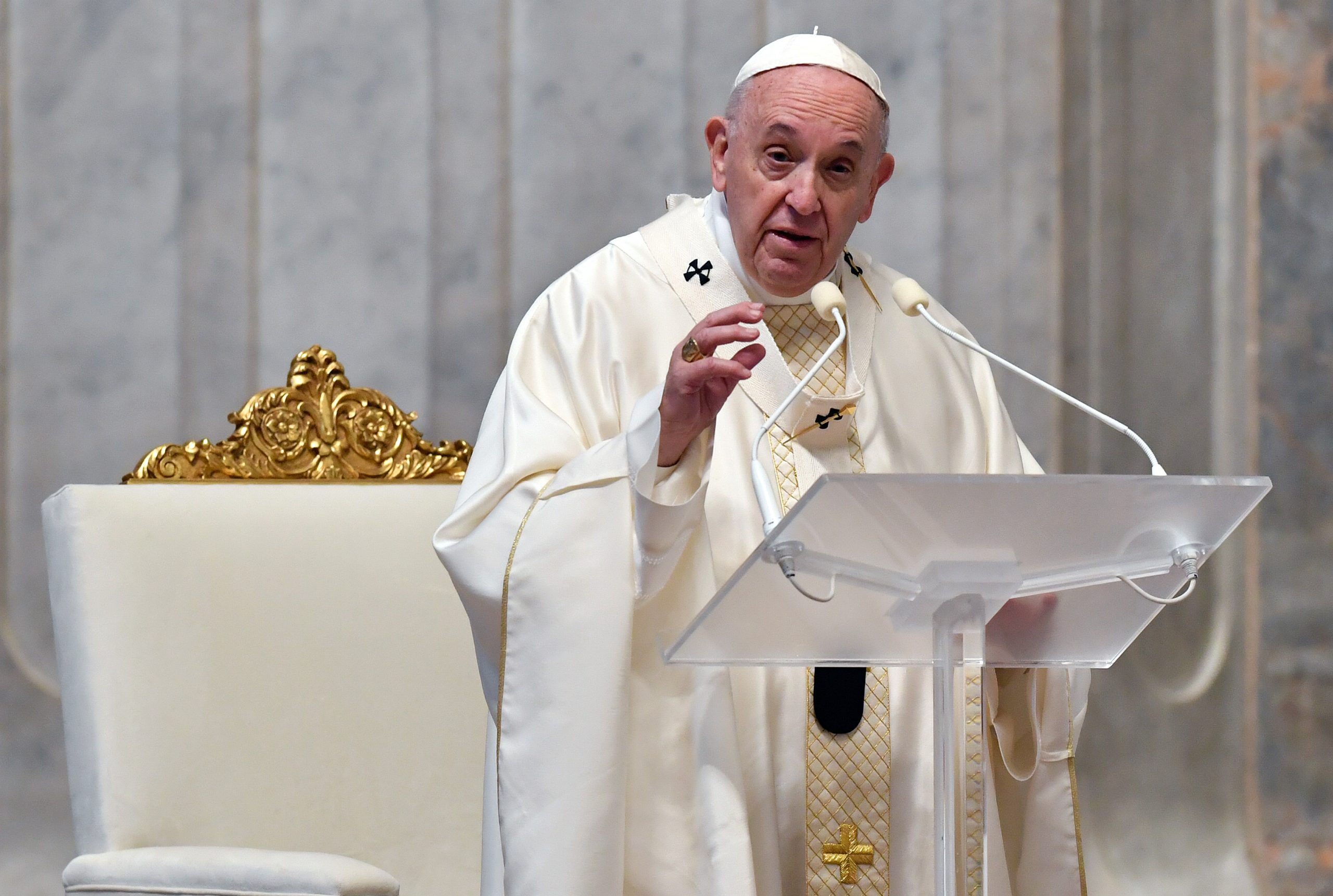 Pope Francis delivers the homily as he celebrates the Mass of the Lord's Supper on April 9, 2020, in St. Peter's Basilica at the Vatican. (CNS photo/Vatican Media via Reuters)
There is no Chrism Mass today – I hope we can have it before Pentecost, otherwise it will have to be postponed to next year – but I cannot let tonight’s Mass pass by without remembering priests. Priests who offer their lives for the Lord, priests who are servants. In these days many of them have died, more than sixty here in Italy, while tending to the sick in hospital, together with doctors and nurses... They are “saints next door”, priests who have given their lives in serving. I think too of those who are far away. Today I received a letter from a priest, a chaplain in a prison far away, who told me how he was spending this Holy Week with the prisoners. A Franciscan priest. Priests who travel far to bring the Gospel and who die far away. A bishop told me once that the first thing he did on arriving in these mission posts was to go to the cemetery, to the graves of priests who gave their lives there, young priests who died from local diseases because they were not prepared, they didn’t have the antibodies; and no one knew their names: anonymous priests. Then there are the parish priests in the countryside, pastors of four, five, seven little villages in the mountains, who go from one to the other, who know the people. One of them once told me that he knew the name of every person in his villages. I asked him, “Really?” And he told me “I even know the dogs’ names!” They know everyone. Priestly closeness. Good, good priests. 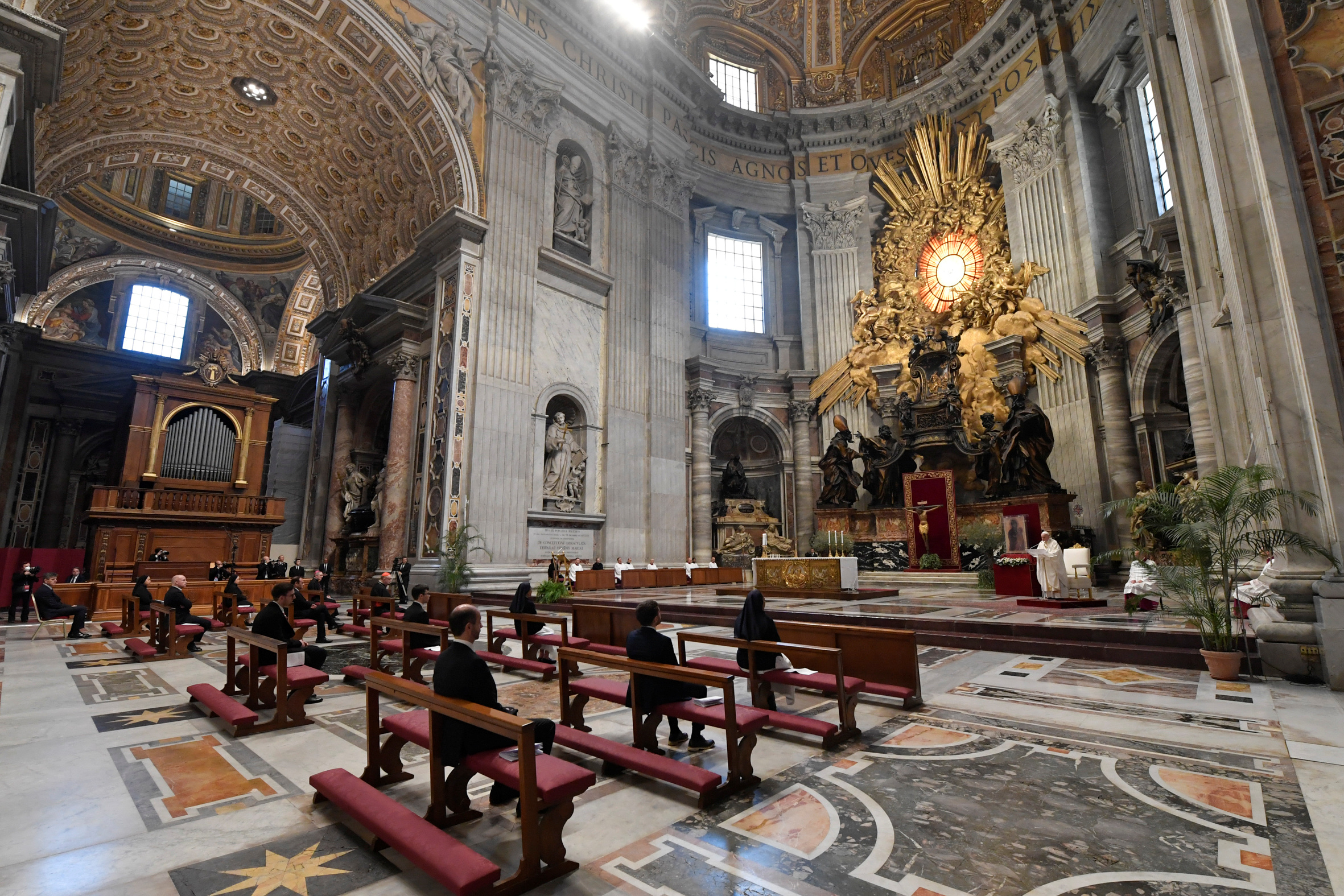 Pope Francis celebrates the Mass of the Lord's Supper on April 9, 2020, in St. Peter's Basilica at the Vatican. (CNS photo/Vatican Media via Reuters)
Today I carry you in my heart and I carry you to the altar. Also priests who are slandered. This happens often today; they cannot walk about freely because people say bad things about them, referring to the scandal from discovering priests who have done bad things. Some of them have told me that they cannot go out wearing clerics because people insult them. Yet they carry on. Priests who are sinners, together with bishops and the Pope who is also a sinner, must not forget to ask forgiveness and learn how to forgive because they know that they need to ask forgiveness and to forgive. We are all sinners. Priests who suffer from crises, who do not know what to do, who live in darkness... Today you are all with me, brother priests, at the altar, you who are consecrated. I say to you just one thing: do not be stubborn like Peter. Let your feet be washed, the Lord is your servant, he is close to you, and he gives you strength to wash the feet of others. In this way, conscious of the need to be washed clean, you will be great dispensers of forgiveness. Forgive! Have a big heart that is generous in forgiving. This is the measure by which we will be judged. As you have forgiven, so you will be forgiven, in the same measure. Do not be afraid to forgive. Sometimes we have doubts; look to Christ [he looks to the Crucifix]. There, there is forgiveness for all. Be courageous, also in taking risks, in forgiving, in order to bring consolation. And if you cannot give sacramental pardon at this moment, then at least give the consolation of a brother to those you accompany, leaving the door open for people to return. I thank God for the grace of the priesthood, we all give thanks. I thank God for you, priests. Jesus loves you! He asks only that you let him wash your feet.   Text courtesy of Libreria Editrice Vaticana (click here for original source) 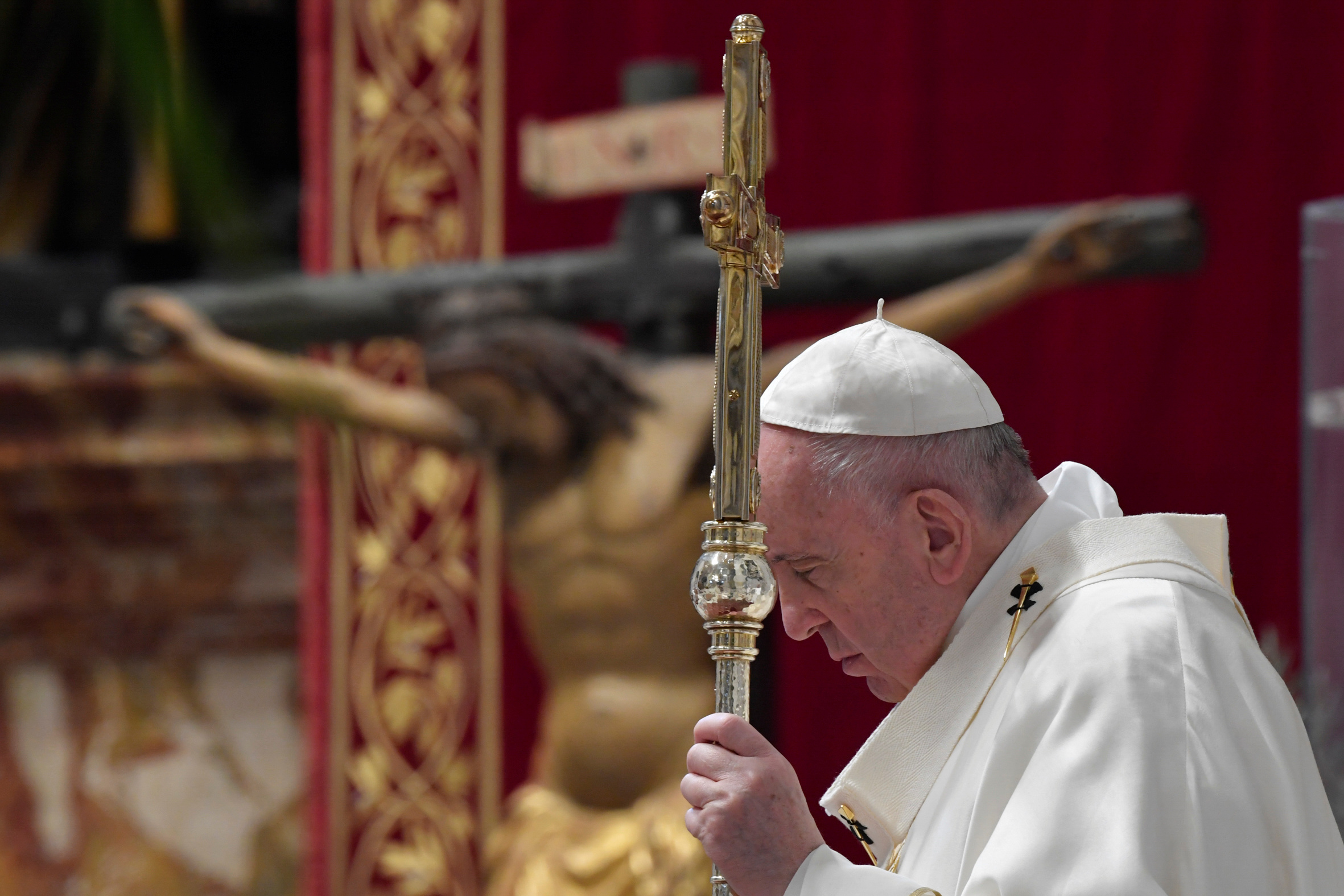 Pope Francis celebrates the Mass of the Lord's Supper on April 9, 2020, in St. Peter's Basilica at the Vatican. (CNS photo/Vatican Media via Reuters)