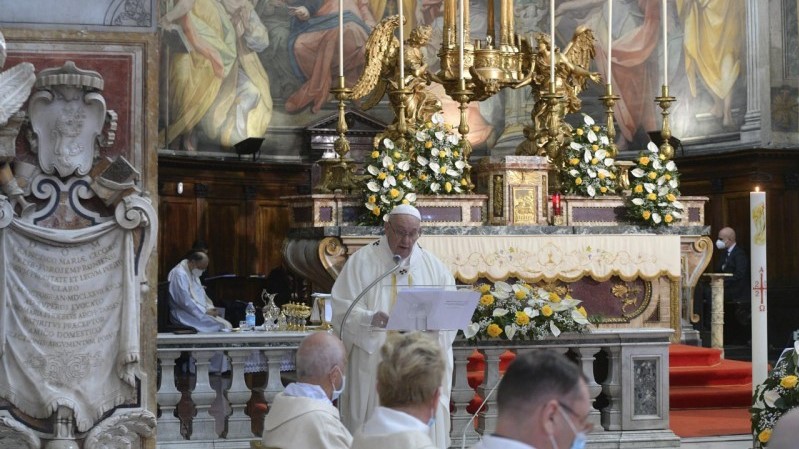 Pope Francis celebrates Mass for Divine Mercy Sunday at the Church of Santo Spirito in Sassia, in Rome, on April 11, 2021. Photo courtesy of Vatican Media.

On April 11, 2021, Pope Francis again celebrated Mass for Divine Mercy Sunday at the Church of Santo Spirito in Sassia, in Rome. Read the full text of his homily below.

The risen Jesus appeared to the disciples on several occasions. He patiently soothed their troubled hearts. Risen himself, he now brings about “the resurrection of the disciples”. He raises their spirits and their lives are changed. Earlier, the Lord’s words and his example had failed to change them. Now, at Easter, something new happens, and it happens in the light of mercy. Jesus raises them up with mercy. Having received that mercy, they become merciful in turn. It is hard to be merciful without the experience of having first received mercy. First, they receive mercy through three gifts. First, Jesus offers them peace, then the Spirit and finally his wounds. The disciples were upset. They were locked away for fear, fear of being arrested and ending up like the Master. But they were not only huddled together in a room; they were also trapped in their own remorse. They had abandoned and denied Jesus. They felt helpless, discredited, good for nothing. Jesus arrives and says to them twice, “Peace be with you!” He does not bring a peace that removes the problems without, but one that infuses trust within. It is no outward peace, but peace of heart. He tells them “Peace be with you! As the Father has sent me, even so I send you” (Jn 20:21). It is as if to say, “I am sending you because I believe in you”. Those disheartened disciples were put at peace with themselves. The peace of Jesus made them pass from remorse to mission. The peace of Jesus awakens mission. It entails not ease and comfort, but the challenge to break out of ourselves. The peace of Jesus frees from the self-absorption that paralyzes; it shatters the bonds that keep the heart imprisoned. The disciples realized that they had been shown mercy: they realized that God did not condemn or demean them, but instead believed in them.  God, in fact, believes in us even more than we believe in ourselves. “He loves us better than we love ourselves (cf. SAINT JOHN HENRY NEWMAN, Meditations and Devotions, III, 12, 2). As far as God is concerned, no one is useless, discredited or a castaway. Today Jesus also tells us, “Peace be with you! You are precious in my eyes. Peace be with you! You are important for me. Peace be with you! You have a mission. No one can take your place. You are irreplaceable. And I believe in you”. 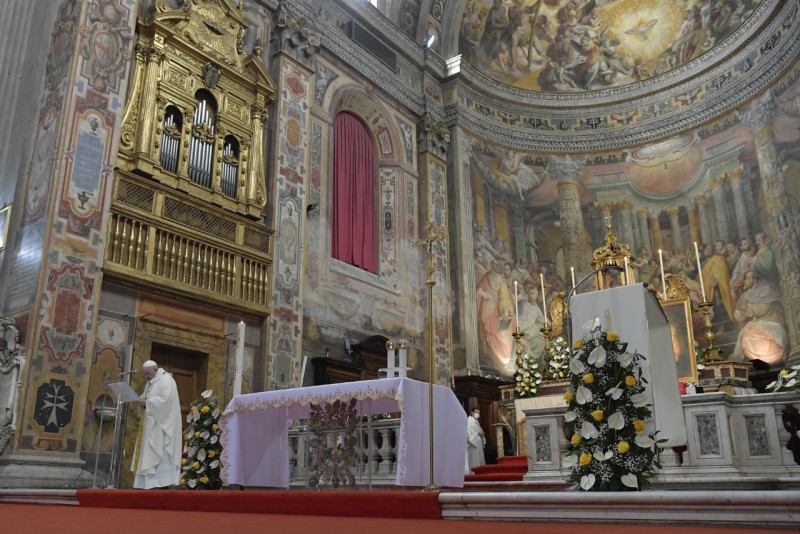 Pope Francis celebrates Mass for Divine Mercy Sunday at the Church of Santo Spirito in Sassia, in Rome, on April 11, 2021. Photo courtesy of Vatican Media.
Second, Jesus showed mercy to his disciples by granting them the Holy Spirit. He bestowed the Spirit for the forgiveness of sins (cf. vv. 22-23). The disciples were guilty; they had run away, they had abandoned the Master. Sin brings torment; evil has its price. Our sin, as the Psalmist says (cf. 51:5), is always before us. Of ourselves, we cannot remove it. Only God takes it away, only he by his mercy can make us emerge from the depths of our misery. Like those disciples, we need to let ourselves be forgiven, to ask heartfelt pardon of the Lord. We need to open our hearts to being forgiven. Forgiveness in the Holy Spirit is the Easter gift that enables our interior resurrection. Let us ask for the grace to accept that gift, to embrace the Sacrament of forgiveness. And to understand that Confession is not about ourselves and our sins, but about God and his mercy. Let us not confess to abase ourselves, but to be raised up. We, all of us, need this badly. Like little children who, whenever they fall, need to be picked up by their fathers, we need this. We too fall frequently. And the hand of our Father is ready to set us on our feet again and to make us keep walking. That sure and trustworthy hand is Confession. Confession is the sacrament that lifts us up; it does not leave us on the ground, weeping on the hard stones where we have fallen.  Confession is the Sacrament of resurrection, pure mercy. All those who hear confessions ought to convey the sweetness of mercy. This is what confessors are meant to do: to convey the sweetness of the mercy of Jesus who forgives everything. God forgives everything. Together with the peace that rehabilitates us and the forgiveness that lifts us up, Jesus gave his disciples a third gift of mercy: he showed them his wounds. By those wounds we were healed (cf. 1 Pet 2:24; Is 53:5). But how can wounds heal us? By mercy. In those wounds, like Thomas, we can literally touch the fact that God has loved us to the end. He has made our wounds his own and borne our weaknesses in his own body. His wounds are open channels between him and us, shedding mercy upon our misery. His wounds are the pathways that God has opened up for us to enter into his tender love and actually “touch” who he is. Let us never again doubt his mercy. In adoring and kissing his wounds, we come to realize that in his tender love all our weaknesses are accepted. This happens at every Mass, where Jesus offers us his wounded and risen Body. We touch him and he touches our lives. He makes heaven come down to us. His radiant wounds dispel the darkness we carry within. Like Thomas, we discover God; we realize how close he is to us and we are moved to exclaim, “My Lord and my God!” (Jn 20:28). Everything comes from this, from the grace of receiving mercy. This is the starting-point of our Christian journey. But if we trust in our own abilities, in the efficiency of our structures and projects, we will not go far. Only if we accept the love of God, will we be able to offer something new to the world. 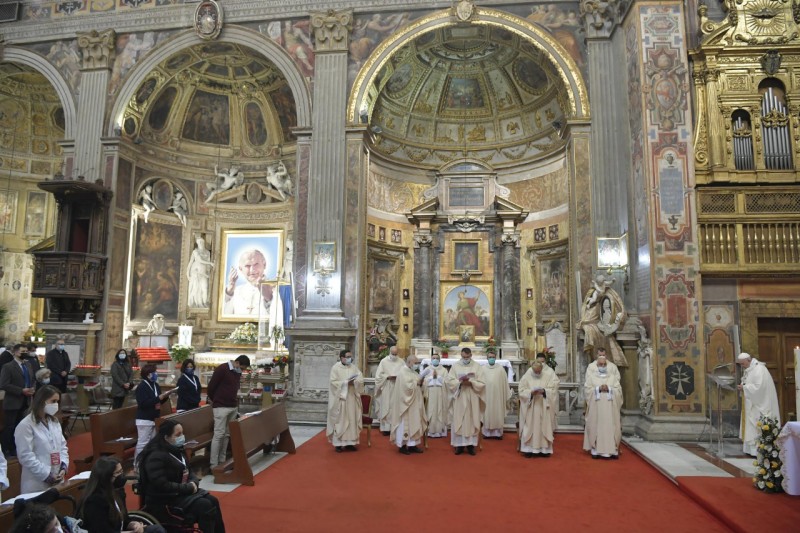 Pope Francis celebrates Mass for Divine Mercy Sunday at the Church of Santo Spirito in Sassia, in Rome, on April 11, 2021. Photo courtesy of Vatican Media.
And that is what the disciples did: receiving mercy, they in turn became merciful. We see this in the first reading. The Acts of the Apostles relate that “no one claimed private ownership of any possessions, but everything they owned was held in common” (4:32). This is not communism, but pure Christianity. It is all the more surprising when we think that those were the same disciples who had earlier argued about prizes and rewards, and about who was the greatest among them (cf. Mt 10:37; Lk 22:24). Now they share everything; they are “of one heart and soul”” (Acts 4:32). How did they change like that? They now saw in others the same mercy that had changed their own lives. They discovered that they shared the mission, the forgiveness and the Body of Jesus, and so it seemed natural to share their earthly possessions. The text continues: “There was not a needy person among them” (v. 34). Their fears had been dispelled by touching the Lord’s wounds, and now they are unafraid to heal the wounds of those in need. Because there they see Jesus. Because Jesus is there, in the wounds of those in need. Dear sister, dear brother, do you want proof that God has touched your life? See if you can stoop to bind the wounds of others. Today is the day to ask, “Am I, who so often have received God’s peace, his mercy, merciful to others? Do I, who have so often been fed by the Body of Jesus, make any effort to relieve the hunger of the poor?” Let us not remain indifferent. Let us not live a one-way faith, a faith that receives but does not give, a faith that accepts the gift but does not give it in return. Having received mercy, let us now become merciful. For if love is only about us, faith becomes arid, barren and sentimental. Without others, faith becomes disembodied. Without works of mercy, it dies (cf. Jas 2:17). Dear brothers and sisters, let us be renewed by the peace, forgiveness and wounds of the merciful Jesus. Let us ask for the grace to become witnesses of mercy. Only in this way will our faith be alive and our lives unified. Only in this way will we proclaim the Gospel of God, which is the Gospel of mercy. Text courtesy of the Libreria Editrice Vaticana (click here for original source) 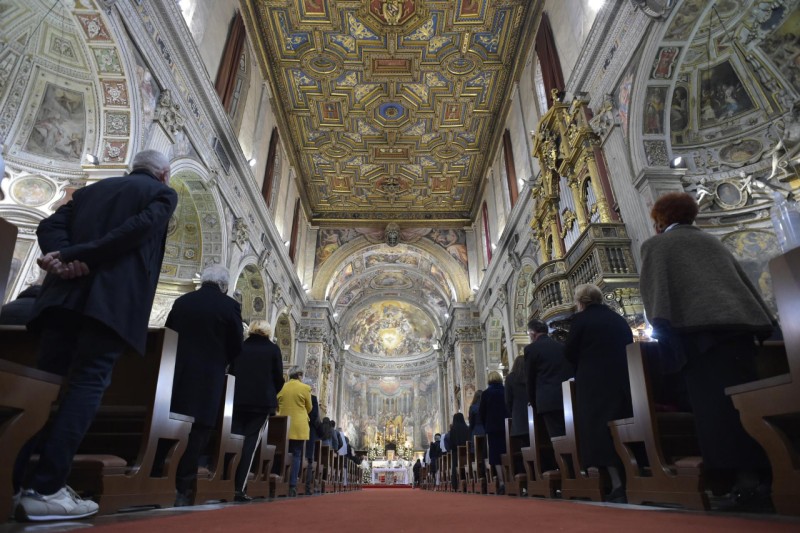 Pope Francis celebrates Mass for Divine Mercy Sunday at the Church of Santo Spirito in Sassia, in Rome, on April 11, 2021. Photo courtesy of Vatican Media.