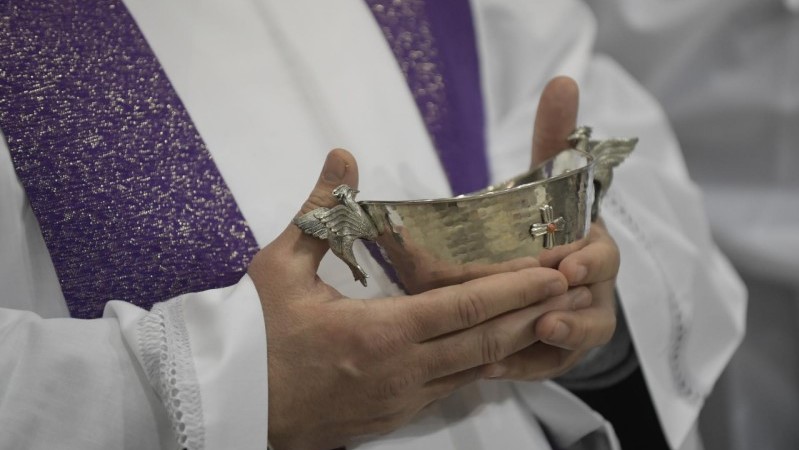 Pope Francis was unable to attend the traditional Ash Wednesday Mass in Santa Sabina in Rome, which was celebrated instead by Cardinal Pietro Parolin. Photo courtesy of Vatican Media.

Ash Wednesday marks the beginning of the season of Lent. Traditionally, on this day the pope participates in a penitential procession in Rome from the Basilica of St. Anselm to the Basilica of Santa Sabina, where he then celebrates Mass with the imposition of ashes. On the advice of his doctors, due to acute knee pain, Pope Francis did not attend the traditional ceremonies this year, and they were instead presided over by Cardinal Pietro Parolin, the Vatican's Secretary of State. The Ash Wednesday homily prepared by Pope Francis was read out during the Mass by Cardinal Parolin. Read the full text below:

Today, as we embark on the Lenten season, the Lord says to us: “Beware of practicing your piety before others in order to be seen by them; for then you have no reward from your Father in heaven” (Mt 6:1). It may be surprising, but in today’s Gospel, the word we hear most frequently is reward (cf. vv 1.2.5.16). Usually, on Ash Wednesday, we think more of the commitment demanded by the journey of faith, rather than the prize that is its goal. Yet today Jesus keeps returning to that word, reward, which can appear to be the reason for our actions. Yet within our hearts, in fact, there is a thirst, a desire for a reward, which attracts and motivates us. The Lord, however, speaks of two kinds of reward to which our lives can tend: a reward from the Father and, on the other hand, a reward from others. The first is eternal, the true and ultimate reward, the purpose of our lives. The second is ephemeral, a spotlight we seek whenever the admiration of others and worldly success become the most important thing for us, our greatest gratification. Yet the latter is merely an illusion. It is like a mirage that, once we get there, proves illusory; it leaves us unfulfilled. Restlessness and discontent are always around the corner for those who look to a worldliness that attracts but then disappoints. Those who seek worldly rewards never find peace or contribute to peace. They lose sight of the Father and their brothers and sisters. This is a risk we all face, and so Jesus tells us to “beware”. As if to say: “You have a chance to enjoy an infinite reward, an incomparable reward. Beware, then, and do not let yourself be dazzled by appearances, pursuing cheap rewards that disappoint as soon as you touch them”. 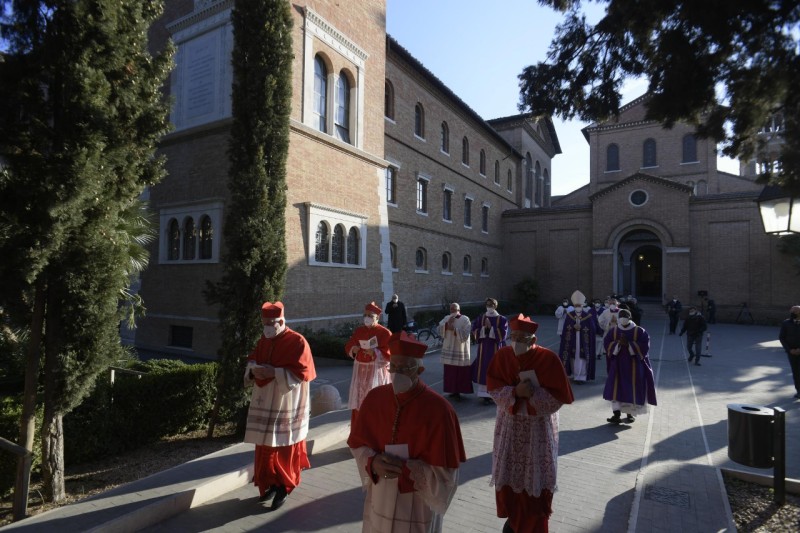 The penitential procession, led by Cardinal Pietro Parolin, leaves the Basilica of St. Anselm in Rome on Ash Wednesday, March 2, 2022. Photo courtesy of Vatican Media.
The rite of receiving ashes on our heads is meant to protect us from the error of putting the reward received from others ahead of the reward we receive from the Father. This austere sign, which leads us to reflect on the transience of our human condition, is like a medicine that has a bitter taste and yet is effective for curing the illness of appearances, a spiritual illness that enslaves us and makes us dependent on the admiration of others. It is a true “slavery” of the eyes and the mind (cf. Eph 6:6, Col 3:22). A slavery that makes us live our lives for vainglory, where what counts is not our purity of heart but the admiration of others. Not how God sees us, but how others see us. We cannot live well if we are willing to be content with that reward. The problem is that this “illness of appearances” threatens even the most sacred of precincts. That is what Jesus tells us today: that even prayer, charity and fasting can become self-referential. In every act, even the most noble, there can hide the worm of self-complacency. Then our heart is not completely free, for it seeks, not the love of the Father and of our brothers and sisters, but human approval, people’s applause, our own glory. Everything can then become a kind of pretense before God, before oneself and before others. That is why the word of God urges us to look within and to recognize our own hypocrisies. Let us make a diagnosis of the appearances that we seek, and let us try to unmask them. It will do us good. The ashes bespeak the emptiness hiding behind the frenetic quest for worldly rewards. They remind us that worldliness is like the dust that is carried away by a slight gust of wind. Sisters and brothers, we are not in this world to chase the wind; our hearts thirst for eternity. Lent is the time granted us by the Lord to be renewed, to nurture our interior life and to journey towards Easter, towards the things that do not pass away, towards the reward we are to receive from the Father. Lent is also a journey of healing. Not to be changed overnight, but to live each day with a renewed spirit, a different “style”. Prayer, charity and fasting are aids to this. Purified by the Lenten ashes, purified of the hypocrisy of appearances, they become even more powerful and restore us to a living relationship with God, our brothers and sisters, and ourselves. 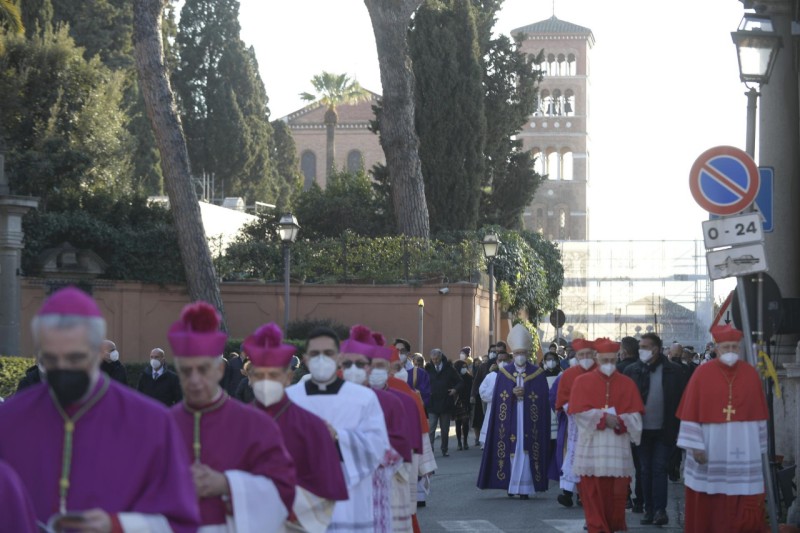 The penitential procession, led by Cardinal Pietro Parolin, makes its way along the streets of Rome on Ash Wednesday, March 2, 2022. Photo courtesy of Vatican Media.
Prayer, humble prayer, prayer “in secret” (Mt 6:6), in the hiddenness of our rooms, becomes the secret to making our lives flourish everywhere else. Prayer is a dialogue, warm in affection and trust, which consoles and expands our hearts. During this Lenten season, let us pray above all by looking at the Crucified Lord. Let us open our hearts to the touching tenderness of God, and in his wounds place our own wounds and those of our world. Let us not be always in a rush, but find the time to stand in silence before him. Let us rediscover the fruitfulness and simplicity of a heartfelt dialogue with the Lord. For God is not interested in appearances. Instead, he loves to be found in secret, “the secrecy of love”, far from all ostentation and clamour. If prayer is real, it necessarily bears fruit in charity. And charity sets us free from the worst form of enslavement, which is slavery to self. Lenten charity, purified by these ashes, brings us back to what is essential, to the deep joy to be found in giving. Almsgiving, practised far from the spotlights, fills the heart with peace and hope. It reveals to us the beauty of giving, which then becomes receiving, and thus enables us to discover a precious secret: our hearts rejoice more at giving than at receiving (cf. Acts 20:35). Finally, fasting. Fasting is not a diet. Indeed, it sets us free from the self-centred and obsessive quest of physical fitness, in order to help us to keep in shape not only our bodies but our spirit as well. Fasting makes us appreciate things for their true worth. It reminds us in a concrete way that life must not be made dependent upon the fleeting landscape of the present world. Nor should fasting be restricted to food alone. Especially in Lent, we should fast from anything that can create in us any kind of addiction. This is something each of us should reflect on, so as to fast in a way that will have an effect on our actual lives. 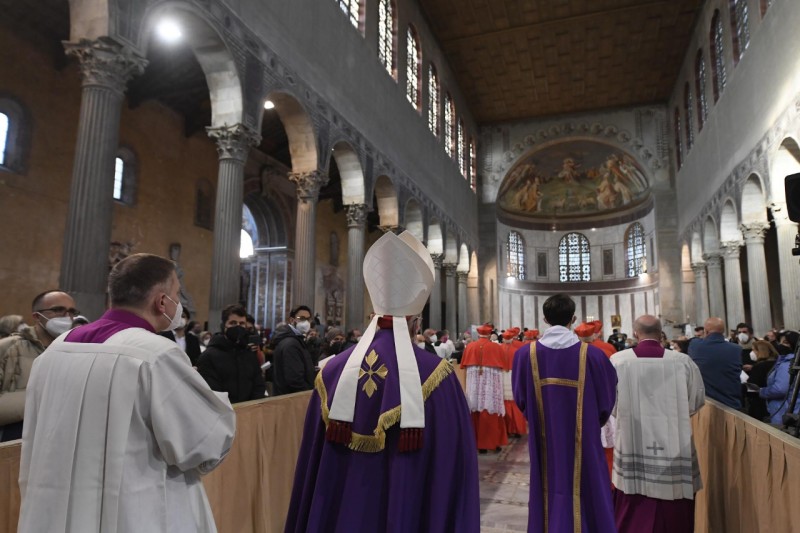 The penitential procession, led by Cardinal Pietro Parolin, arrives at the Basilica of Santa Sabina in Rome on Ash Wednesday, March 2, 2022. Photo courtesy of Vatican Media.
Prayer, charity and fasting need to grow “in secret”, but that is not true of their effects. Prayer, charity and fasting are not medicines meant only for ourselves but for everyone: they can change history. First, because those who experience their effects almost unconsciously pass them on to others; but above all, because prayer, charity and fasting are the principal ways for God to intervene in our lives and in the world. They are weapons of the spirit and, with them, on this day of prayer and fasting for Ukraine, we implore from God that peace which men and women are incapable of building by themselves. O Lord, you see in secret and you reward us beyond our every expectation. Hear the prayers of those who trust in you, especially the lowly, those sorely tried, and those who suffer and flee before the roar of weapons. Restore peace to our hearts; once again, grant your peace to our days. Amen. Text courtesy of Libreria Editrice Vaticana