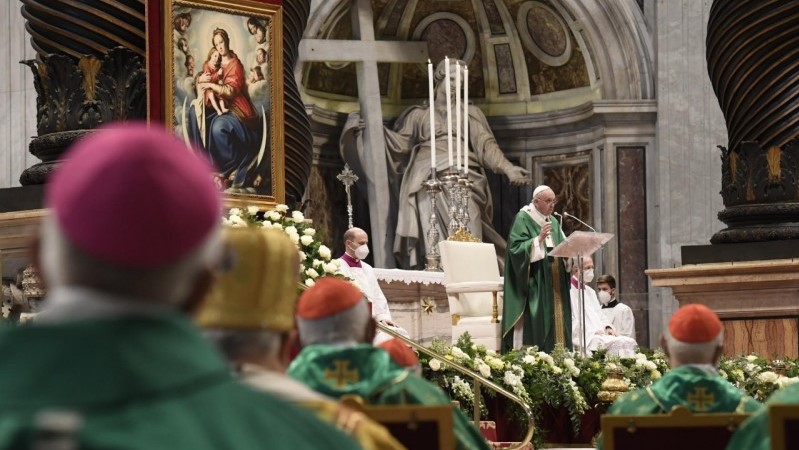 Pope Francis celebrates the opening Mass for the 2021-2023 synod on synodality in St. Peter's Basilica on October 10, 2021. Photo courtesy of Vatican Media.

As part of the official opening of the 2021-2023 synod on synodality, Pope Francis celebrated Mass for the 28th Sunday in Ordinary Time in St. Peter's Basilica in the Vatican on October 10, 2021. The synodal process will begin on October 17th in dioceses around the world and culminate in the Synod of Bishops in Rome in October 2023. Read the full text of Pope Francis' homily at the synod's opening Mass.

A certain rich man came up to Jesus “as he was setting out on his journey” (Mk 10:17).  The Gospels frequently show us Jesus “on a journey”; he walks alongside people and listens to the questions and concerns lurking in their hearts.  He shows us that God is not found in neat and orderly places, distant from reality, but walks ever at our side.  He meets us where we are, on the often rocky roads of life.  Today, as we begin this synodal process, let us begin by asking ourselves – all of us, Pope, bishops, priests, religious and laity – whether we, the Christian community, embody this “style” of God, who travels the paths of history and shares in the life of humanity.  Are we prepared for the adventure of this journey?  Or are we fearful of the unknown, preferring to take refuge in the usual excuses: “It’s useless” or “We’ve always done it this way”? Celebrating a Synod means walking on the same road, walking together.  Let us look at Jesus.  First, he encounters the rich man on the road; he then listens to his questions, and finally he helps him discern what he must do to inherit eternal life.  Encounter, listen and discern.  I would like to reflect on these three verbs that characterize the Synod. The first is encounter.  The Gospel passage begins by speaking of an encounter.  A man comes up to Jesus and kneels down before him, asking him a crucial question: “Good Teacher, what must I do to inherit eternal life?” (v. 17).  So important a question requires attention, time, willingness to encounter others and sensitivity to what troubles them.  The Lord does not stand aloof; he does not appear annoyed or disturbed.  Instead, he is completely present to this person.  He is open to encounter.  Nothing leaves Jesus indifferent; everything is of concern to him.  Encountering faces, meeting eyes, sharing each individual’s history.  That is the closeness that Jesus embodies.  He knows that someone’s life can be changed by a single encounter.  The Gospel is full of such encounters with Christ, encounters that uplift and bring healing.  Jesus did not hurry along, or keep looking at his watch to get the meeting over.  He was always at the service of the person he was with, listening to what he or she had to say. 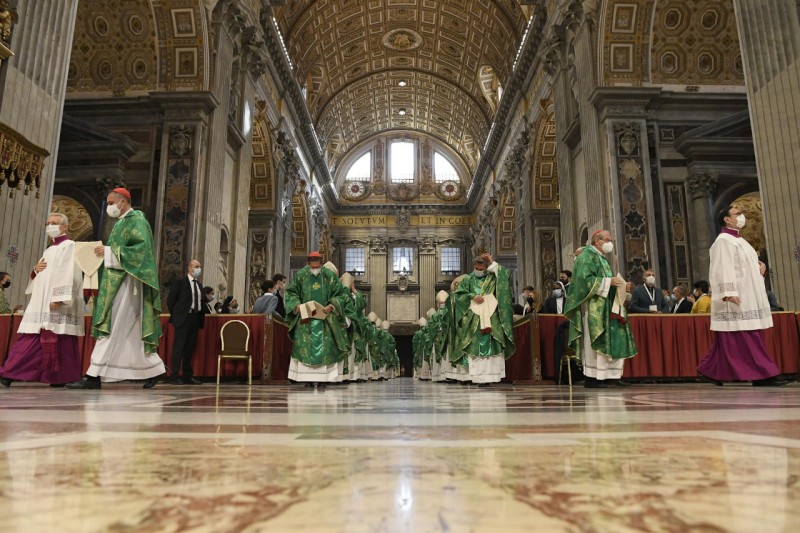 Pope Francis celebrates the opening Mass for the 2021-2023 synod on synodality in St. Peter's Basilica on October 10, 2021. Photo courtesy of Vatican Media.
As we initiate this process, we too are called to become experts in the art of encounter.  Not so much by organizing events or theorizing about problems, as in taking time to encounter the Lord and one another.  Time to devote to prayer and to adoration – that form of prayer that we so often neglect – devoting time to adoration, and to hearing what the Spirit wants to say to the Church.  Time to look others in the eye and listen to what they have to say, to build rapport, to be sensitive to the questions of our sisters and brothers, to let ourselves be enriched by the variety of charisms, vocations and ministries.  Every encounter – as we know – calls for openness, courage and a willingness to let ourselves be challenged by the presence and the stories of others.  If at times we would rather take refuge in formality or presenting the proper image – the clerical and courtly spirit, where I am more Monsieur l’abbé than Father – the experience of encounter changes us; frequently it opens up new and unexpected possibilities.  Following today’s Angelus, I will meet with a group of street people who came together simply because a group of people made an effort to listen to them, sometimes just to listen to them.  And from that listening they succeeded in setting out on a new path.  So often God points out new paths in just this way.  He invites us to leave our old habits behind.  Everything changes once we are capable of genuine encounters with him and with one another, without formalism or pretense, but simply as we are. The second verb is listen.  True encounter arises only from listening.  Jesus listened to that man’s question and to the religious and existential concerns that lay behind it.  He did not give a non-committal reply or offer a prepackaged solution; he did not pretend to respond politely, simply as a way of dismissing him and continuing on his way.  Jesus simply listens, for whatever amount of time it takes; he is not rushed.  Most importantly, he is not afraid to listen to him with his heart and not just with his ears.  Indeed, he does more than simply answer the rich man’s question; he lets him tell his story, to speak freely about himself.  Christ reminds him of the commandments, and the man starts to talk about his youth, to share his religious journey and his efforts to seek God.  This happens whenever we listen with the heart: people feel that they are being heard, not judged; they feel free to recount their own experiences and their spiritual journey. Let us ask ourselves frankly during this synodal process: Are we good at listening?  How good is the “hearing” of our heart?  Do we allow people to express themselves, to walk in faith even though they have had difficulties in life, and to be part of the life of the community without being hindered, rejected or judged?  Participating in a Synod means placing ourselves on the same path as the Word made flesh.  It means following in his footsteps, listening to his word along with the words of others.  It means discovering with amazement that the Holy Spirit always surprises us, to suggest fresh paths and new ways of speaking.  It is a slow and perhaps tiring exercise, this learning to listen to one another – bishops, priests, religious and laity, all the baptized – and to avoid artificial and shallow and pre-packaged responses.  The Spirit asks us to listen to the questions, concerns and hopes of every Church, people and nation.  And to listen to the world, to the challenges and changes that it sets before us.  Let us not soundproof our hearts; let us not remain barricaded in our certainties.  So often our certainties can make us closed.  Let us listen to one another. 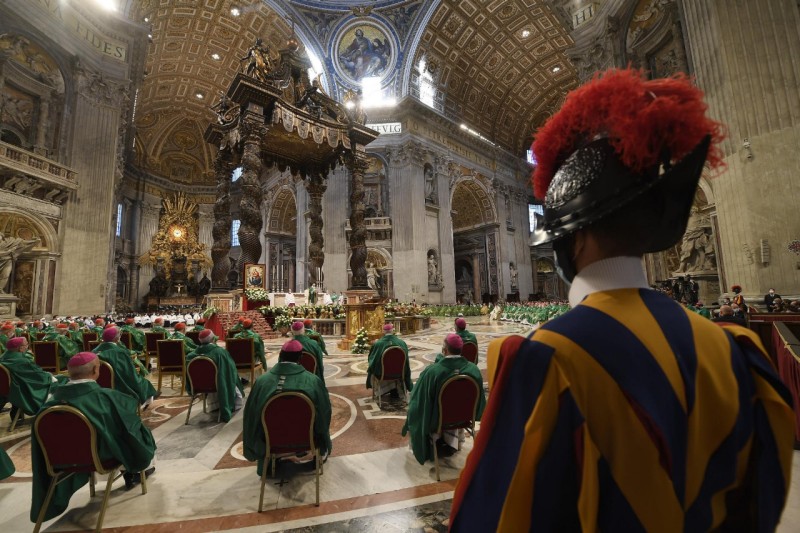 Pope Francis celebrates the opening Mass for the 2021-2023 synod on synodality in St. Peter's Basilica on October 10, 2021. Photo courtesy of Vatican Media.
Finally, discern.  Encounter and listening are not ends in themselves, leaving everything just as it was before.  On the contrary, whenever we enter into dialogue, we allow ourselves to be challenged, to advance on a journey.  And in the end, we are no longer the same; we are changed.  We see this in today’s Gospel.  Jesus senses that the person before him is a good and religious man, obedient to the commandments, but he wants to lead him beyond the mere observance of precepts.  Through dialogue, he helps him to discern.  Jesus encourages that man to look within, in the light of the love that the Lord himself had shown by his gaze (cf. v. 21), and to discern in that light what his heart truly treasures.  And in this way to discover that he cannot attain happiness by filling his life with more religious observances, but by emptying himself, selling whatever takes up space in his heart, in order to make room for God. Here is a valuable lesson also for us.  The Synod is a process of spiritual discernment, of ecclesial discernment, that unfolds in adoration, in prayer and in dialogue with the word of God.  Today’s second reading tells us that God’s word is “living and active, sharper than any two-edged sword, piercing to the division of soul and spirit, of joints and marrow, and discerning the thoughts and intentions of the heart” (Heb 4:12).  That word summons us to discernment and it brings light to that process.  It guides the Synod, preventing it from becoming a Church convention, a study group or a political gathering, a parliament, but rather a grace-filled event, a process of healing guided by the Spirit.  In these days, Jesus calls us, as he did the rich man in the Gospel, to empty ourselves, to free ourselves from all that is worldly, including our inward-looking and outworn pastoral models; and to ask ourselves what it is that God wants to say to us in this time.  And the direction in which he wants to lead us. Dear brothers and sisters, let us have a good journey together!  May we be pilgrims in love with the Gospel and open to the surprises of the Holy Spirit.  Let us not miss out on the grace-filled opportunities born of encounter, listening and discernment.  In the joyful conviction that, even as we seek the Lord, he always comes with his love to meet us first. Text courtesy of Libreria Editrice Vaticana (click here for original source) 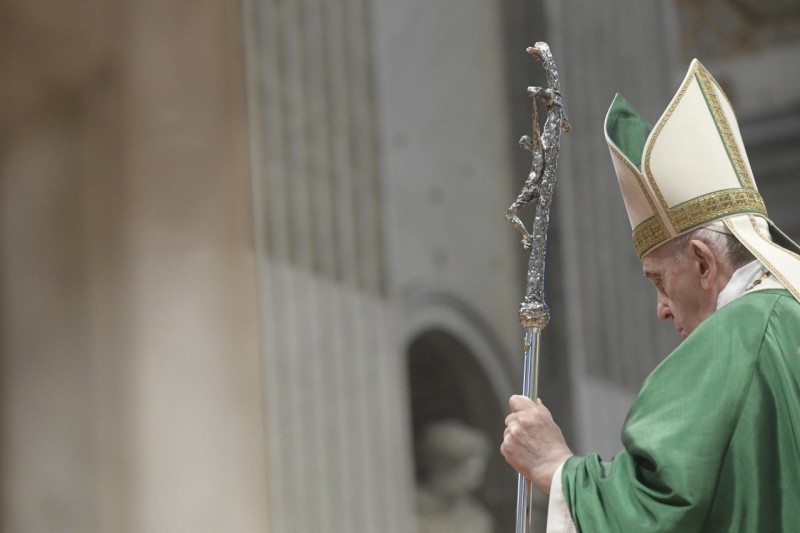 Pope Francis celebrates the opening Mass for the 2021-2023 synod on synodality in St. Peter's Basilica on October 10, 2021. Photo courtesy of Vatican Media.