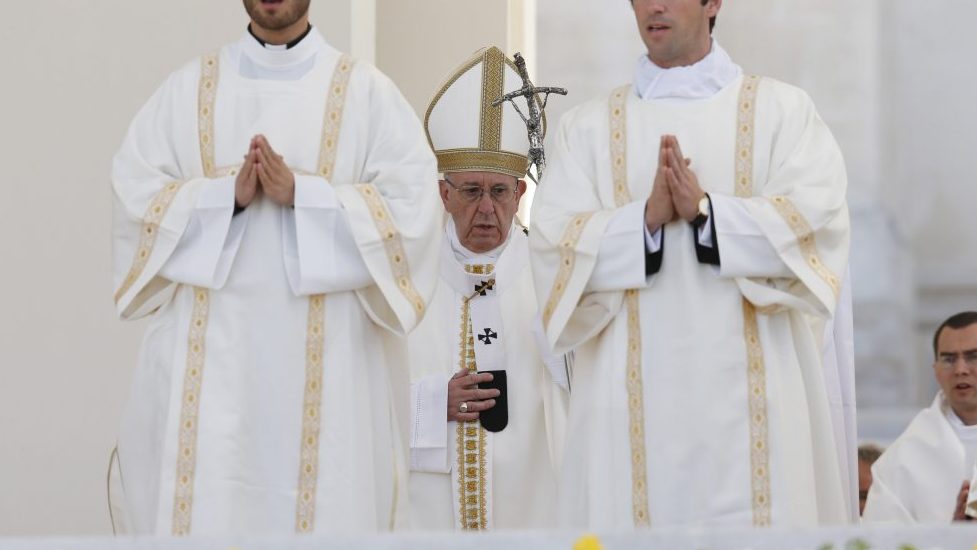 The highlight of Pope Francis’ apostolic visit to Fatima was the canonization Mass on Saturday morning, during which the two shepherd children, Blessed Francisco and Blessed Jacinta were proclaimed saints. During his homily the Pope said, "we can take as our examples Saint Francisco and Saint Jacinta, whom the Virgin Mary introduced into the immense ocean of God’s light and taught to adore him." Below find the English translation of the Pope's Homily: Homily of His Holiness Pope Francis Holy Mass, Basilica of Our Lady of the Rosary of Fatima 13 May 2017

“[There] appeared in heaven a woman clothed with the sun”. So the seer of Patmos tells us in the Book of Revelation (12:1), adding that she was about to give birth to a son. Then, in the Gospel, we hear Jesus say to his disciple, “Here is your mother” (Jn 19:27). We have a Mother! “So beautiful a Lady”, as the seers of Fatima said to one another as they returned home on that blessed day of 13 March a hundred years ago. That evening, Jacinta could not restrain herself and told the secret to her mother: “Today I saw Our Lady”. They had seen the Mother of Heaven. Many others sought to share that vision, but… they did not see her. The Virgin Mother did not come here so that we could see her. We will have all eternity for that, provided, of course, that we go to heaven. Our Lady foretold, and warned us about, a way of life that is godless and indeed profanes God in his creatures. Such a life – frequently proposed and imposed – risks leading to hell. Mary came to remind us that God’s light dwells within us and protects us, for, as we heard in the first reading, “the child [of the woman] was snatched away and taken to God” (Rev 12:5). In Lucia’s account, the three chosen children found themselves surrounded by God’s light as it radiated from Our Lady. She enveloped them in the mantle of Light that God had given her. According to the belief and experience of many pilgrims, if not of all, Fatima is more than anything this mantle of Light that protects us, here as in almost no other place on earth. We need but take refuge under the protection of the Virgin Mary and to ask her, as the Salve Regina teaches: “show unto us… Jesus.” Dear pilgrims, we have a Mother. Clinging to her like children, we live in the hope that rests on Jesus. As we heard in the second reading, “those who receive the abundance of the grace and the free gift of righteousness exercise dominion in life through the one man, Jesus Christ” (Rom 5:17). When Jesus ascended to heaven, he brought to the Heavenly Father our humanity, which he assumed in the womb of the Virgin Mary and will never forsake. Like an anchor, let us fix our hope on that humanity, seated in heaven at the right hand of the Father (cf. Eph 2:6). May this hope guide our lives! It is a hope that sustains us always, to our dying breath. Confirmed in this hope, we have gathered here to give thanks for the countless graces bestowed over these past hundred years. All of them passed beneath the mantle of light that Our Lady has spread over the four corners of the earth, beginning with this land of Portugal, so rich in hope. We can take as our examples Saint Francisco and Saint Jacinta, whom the Virgin Mary introduced into the immense ocean of God’s light and taught to adore him. That was the source of their strength in overcoming opposition and suffering. God’s presence became constant in their lives, as is evident from their insistent prayers for sinners and their desire to remain ever near “the hidden Jesus” in the tabernacle. In her Memoirs (III, 6), Sister Lucia quotes Jacinta who had just been granted a vision: “Do you not see all those streets, all those paths and fields full of people crying out for food, yet have nothing to eat? And the Holy Father in a church, praying before the Immaculate Heart of Mary? And all those people praying with him?” Thank you, brothers and sisters, for being here with me! I could not fail to come here to venerate the Virgin Mary and to entrust to her all her sons and daughters. Under her mantle they are not lost; from her embrace will come the hope and the peace that they require, and that I implore for all my brothers and sisters in baptism and in our human family, especially the sick and the disabled, prisoners and the unemployed, the poor and the abandoned. Dear brothers and sisters, let us pray to God with the hope that others will hear us; and let us speak to others with the certainty that God will help us. Indeed, God created us to be a source of hope for others, a true and attainable hope, in accordance with each person’s state of life. In “asking” and “demanding” of each of us the fulfillment of the duties of our proper state (Letters of Sister Lucia, 28 February 1943), God effects a general mobilization against the indifference that chills the heart and worsens our myopia. We do not want to be a stillborn hope! Life can survive only because of the generosity of other lives. “Unless a grain of wheat falls into the earth and dies, it remains just a single grain; but if it dies, it bears much fruit” (Jn 12:24). The Lord, who always goes before us, said this and did this. Whenever we experience the cross, he has already experienced it before us. We do not mount the cross to find Jesus. Instead it was he who, in his self-abasement, descended even to the cross, in order to find us, to dispel the darkness of evil within us, and to bring us back to the light. With Mary’s protection, may we be for our world sentinels of the dawn, contemplating the true face of Jesus the Saviour, resplendent at Easter. Thus may we rediscover the young and beautiful face of the Church, which shines forth when she is missionary, welcoming, free, faithful, poor in means and rich in love.

_ Photo: Pope Francis celebrates the canonization Mass of Sts. Francisco and Jacinta Marto, two of the three Fatima seers, at the Shrine of Our Lady of Fatima in Portugal, May 13. The Mass marked the 100th anniversary of the Fatima Marian apparitions, which began on May 13, 1917. (CNS photo/Paul Haring)