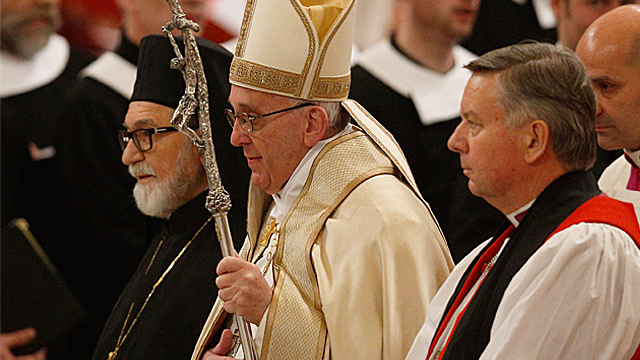 Pope Francis asked for 'mercy and forgiveness' for the way Christians have behaved towards each other, saying we cannot let the weight of past faults continue to contaminate our relationships. The Pope's words came in his homily at an ecumenical celebration of Vespers on Monday evening in the Papal Basilica of St. Paul Outside the Walls marking the end of the Week of Prayer for Christian Unity. In his prepared remarks, the Holy Father focused on the need for divided Christian communities to walk together in the way of the Lord, in the knowledge that unity is a gift of heaven and in the understanding that all service rendered to the cause of the one Gospel builds up the one true Church and gives glory to the one Lord, Jesus Christ.
“While we journey together toward full communion,” said Pope Francis, “we can begin already to develop many forms of cooperation in order to favor the spread of the Gospel – and walking together, we become aware that we are already united in the name of the Lord.”
Pope Francis placed his reflections in the key of the Jubilee Year of Mercy, saying that as Bishop of Rome, he wanted "to ask for forgiveness for the behaviour of Catholics towards Christians of other Churches" which has not reflected Gospel values. At the same time, he said, "I invite all Catholics to forgive if they - today or in the past - have been offended by other Christians". “In this extraordinary Jubilee year of mercy, we must always keep in mind that there cannot be an authentic search for Christian unity without trusting fully in the Father’s mercy,” he said. “God’s mercy,” the Pope said, “will renew our relationships.”
Pope Francis told representatives of the other Christian Churches and communities present in the Basilica that we can make progress on the path to full visible communion "not only when we come closer to each other, but above all as we convert ourselves to the Lord". At the start of Vespers, the Pope invited Orthodox Metropolitan Gennadios, representing the Ecumenical Patriarchate, and Anglican Archbishop David Moxon to walk with him through the Holy Door of the Basilica, while at the end of the celebration he invited them to join him in giving the final blessing.
Text courtesy of Vatican Radio. Pope Francis’ Homily for Christian Unity Vespers Pope Francis delivered the homily at the closing Vespers of the Week of Prayer for Christian Unity in the Basilica of St. Paul "Outside the Walls" in Rome on Monday evening. Below, please find Vatican Radio's full English translation of the Holy Father's prepared remarks.