On the anniversary of Quebec's mosque attack, let's build a "culture of encounter" 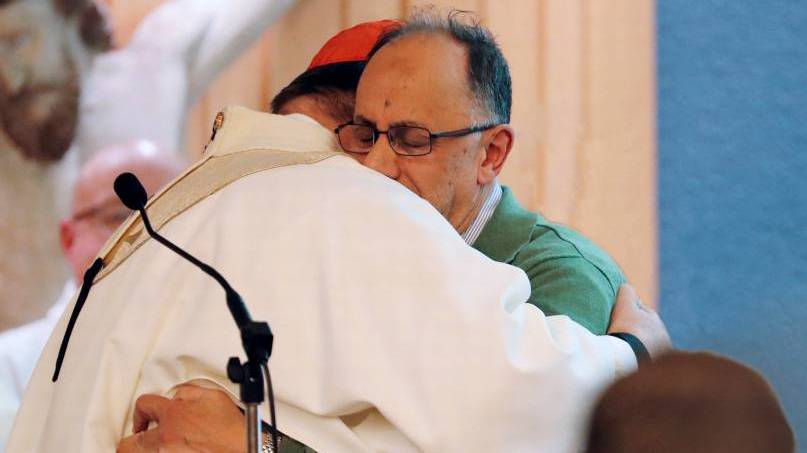 Cardinal Gerald Cyprien Lacroix hugs the co-founder of the Islamic Cultural Centre of Quebec, Boufeldja Benabdallah, during a Mass at Notre-Dame-Foy church in Quebec City on January 31, 2017. (Mathieu Belanger)
On this day two years ago, Alexandre Bissonnette, a young man fuelled with anti-immigrant sentiment and armed with a semi-automatic rifle and a handgun walked into the Islamic Cultural Centre of Quebec City—a local mosque—and opened fire. He killed six of the fifty-three worshippers inside and injured twenty more. The brutal events of that evening continue to haunt the survivors, the victims’ families, the Muslim community, and the whole country.
Commemoration events are scheduled across Canada, including one at Laval University with civil leaders just down the street from the mosque. This year’s commemoration comes only ten days before Bissonnette’s sentencing on February 8th. He’s facing 150 years of prison time after pleading guilty to six counts of first degree murder and six more of attempted murder.
As Canadians remember the victims and contemplate the senseless hate that could provoke a young Canadian to such violence, Pope Francis is preparing for a visit to the United Arab Emirates February 3-5.  His first visit to the Arabian Peninsula will include a private meeting with the international Muslim Council of Elders, an interreligious meeting, and the celebration of Mass for local Catholics.
Outreach to the Muslim world has been a top priority for Pope Francis since his election in 2013. In his annual address to the Diplomatic Corps at the Vatican a few weeks ago, he said this trip — along with a visit to Morocco in March — would, “advance interreligious dialogue and mutual understanding between the followers of both religions, in this year that marks the eight-hundredth anniversary of the historic meeting between Saint Francis of Assisi and Sultan al-Malik al-Kamil.”
The reference to this historic meeting between Saint Francis and the Sultan in Damietta, Egypt, in 1219 is important for understanding Pope Francis’ approach to interfaith dialogue with Islam. In the midst of a crusader war, something happened when the Saint came face-to-face with the Sultan. We do not know the historic details of that encounter, but we know it impacted both men profoundly to the point where pre-conceived notions about the other’s faith began to melt away.
Pope Francis will have this journey of his namesake in mind as he visits the UAE and Morocco to continue building what he calls a “culture of encounter.” Coming face-to-face with people of different beliefs and backgrounds in a spirit of mutual respect is at the core of this effort. And, as is typical of this pope, he models it himself first.
The Cardinal-Archbishop of Quebec, Gerald Lacroix, has watched this “culture” build over the last six years in the Catholic Church and felt the impact personally. He was at the Vatican when he heard about the mosque shooting in Quebec and immediately told Pope Francis. The pope gave him a hug and a clear message: “Go home and tell these people we are with them. Bring them hope.”
The cardinal is one of the protagonists of our upcoming documentary, The Francis Impact. (The film has been in the works for two years and will be released later this spring.)
The film tells the story of the attack on the mosque and how the cardinal immediately reached out to the local Muslim community in solidarity. It was his way of building Pope Francis’ “culture of encounter” at a grassroots level and in the face of immense suffering.
A co-founder of the mosque, Boufeldjah Benabdallah, says in the film how touched and encouraged he was by the cardinal’s fraternal gestures inspired by Francis. The two have since become good friends.
The 2nd anniversary of the mosque attack, together with the upcoming visits of Pope Francis to the UAE and Morocco, are good opportunities to reflect on the Catholic Church’s approach to interfaith dialogue: specifically, how personal encounter and relationship is at the heart of it.

Watch Cardinal Lacroix’s #TFI moment: “Pope Francis has given me the courage to do a little bit more.”

Pope Francis’ words and actions have had a profound impact on countless people of various backgrounds, interests, and beliefs. In the interviews for my upcoming documentary, The Francis Impact, I’ve heard some beautiful and concrete testimonies of this. So I created #TFIMOMENTS, a web series to share some of these profound and personal moments of connection with the pope.