Now or never: urgency needed in run-up to Synod 2015 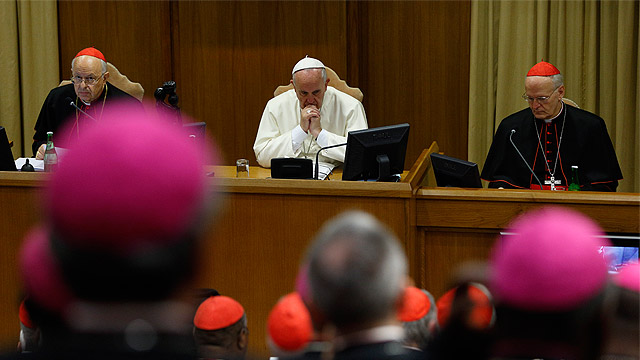 When in October 2013 the Vatican announced the first ever two-stage Synod of Bishops, many in the Catholic Church were hopeful about the possibilities of an in-depth discussion and consultation. After all, a year in between the two Synods is a lot of time, right?
Not necessarily. The Vatican didn’t publish the Lineamenta—a discussion guideline consisting of the final document of the October Synod and a series of questions looking at particular family issues—until over one month after the Synod, on December 9th, 2014. At that time, the Vatican also requested that responses from the Bishops’ conferences on behalf of the local churches be submitted to Rome no later than April 15th.
In Toronto, where Salt and Light is headquartered, Cardinal-Archbishop Thomas Collins invited “a concise response” to the Lineamenta from concerned Catholics with a submission deadline of February 16th. Time is needed, obviously, to organize the responses and send them to the Canadian Conference of Catholic Bishops (CCCB) where the Conference will then need time to organize the responses from around the country.
Though the Archdiocese of Toronto is unique in terms of its size and complexity, we can assume that other dioceses find themselves in the same boat. Suffice it to say, the preparing of the Lineamenta, its wide dissemination and the three-tier organization of material from the local level up to the Vatican quickly turn “one year to mature, with true spiritual discernment,” into only a few weeks of actual discussion and consultation of Catholics in the local churches.
In a sense, no one can be blamed for this. The genuine desire of Pope Francis for real consultation involving the whole Church has been deflated by the reality of a complex bureaucratic system that is characteristic of any global institution. But perhaps a greater focus could be on the discussion and consultation rather than the organization of the material.
There are other challenges, including creating for people a “protected space so that the Holy Spirit may speak,” as the Pope likes to say about the Synods. In other words, conducting an effective and in-depth discussion/reflection even at the parish level is no walk in the park—many parishes have never done that. Considering these limitations, it would be easier to do nothing. But that cannot be the response of Catholics at an historic moment like this. In his landmark document on evangelization today, Pope Francis wrote:

“Pastoral ministry in a missionary key seeks to abandon the complacent attitude that says: “We have always done it this way." I invite everyone to be bold and creative in this task of rethinking the goals, structures, style and methods of evangelization in their respective communities.” (Evangelii Gaudium, 33)

There are two key points to be made here: first, the emphasis on thinking outside of the box. It’s clear; an attitude towards the Synod and this consultation of the People of God which reflects the status quo at the parish or diocesan level is not acceptable. Second, the link between this consultation and evangelization. The Pope is speaking about “pastoral ministry in a missionary key,” which we may not naturally attribute to a Synod consultation. But a process like this is as much about evangelizing ourselves—changing the way we think about being church—as it is about sharing our experiences of family life today.
All of this to speak a word of encouragement to Catholics participating in—or thinking of starting—a conversation around the Synod document at their parish, school or other community. The challenges are many and the timeline is short, but this is also a learning process for every community; “synod” literally means “journeying together." “Even a bad shot is dignified when one accepts a duel,” as Chesterton wrote. Rest assured, if you consider the direction in which the Church is going, it won’t be the last consultation.  When the reality suggests we're nowhere close to perfecting the process, practice is exactly what is needed.  Even if deadlines are missed.
The Pope has said clearly that there are only three authoritative documents to consider during this church-wide consultation: The Lineamenta, the Message to the People of God and the Pope’s final address to the Synod Fathers on October 18th. For those who wish to go a bit deeper, S+L provides you with a complete list of related documents on the Synod of Bishops on the Family:
Important texts for discussion/reflection on the Synod of Bishops on the Family Authoritative 1) Lineamenta (Dec. 2014) 2) Message to the People of God (Oct. 2014) 3) Pope Francis’ final address to the Synod (Oct. 2014) Other 4) Pope Francis’ homily during the concluding Mass of the Synod (Oct. 2014) 5) Midterm report (Oct. 2014) 6) Pope Francis’ opening address to the Synod (Oct. 2014) 7) Pope Francis’ homily during the opening Mass of the Synod (Oct. 2014) 8) Pope Francis’ homily during the prayer vigil for the Synod (Oct. 2014) 9) Instrumentum Laboris for the Extraordinary Synod (June 2014) 10) Cardinal Kasper addresses consistory (Feb. 2014) 11) Pope Francis’ letter to families (Feb. 2014)