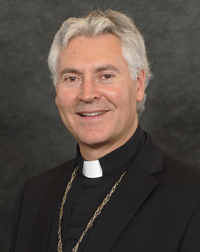 Originally from Saskatoon, Archbishop Chatlain studied at the University of Saskatchewan before entering the seminary. He completed his priestly formation at St. Peter's seminary in London, Ontario and was ordained for the diocese of Saskatoon in 1987. Besides serving at various Saskatoon  parishes, Archbishop Chatlain also studied the Dene language in La Loche, Saskatchewan. He became Bishop of Mackenzie  - Fort Smith in May of 2008 and has been part of the Canadian Catholic Aboriginal Council since that time. Keewatin - Le Pas has 45 parishes and missions and 37,380  Catholics who are served by 4 diocesan priests, 11 religious priests and seven religious sisters. --- Photos courtesy of the Canadian Conference of Catholic Bishops