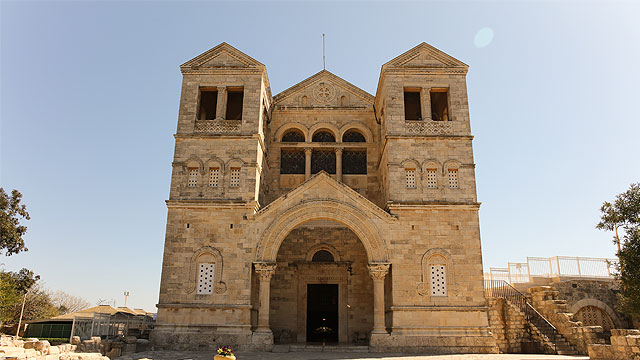 During our fifth day in the Holy Land, on our way to Jerusalem, we stopped by to Mount Tabor (or Mount Hermon), the place where the Transfiguration of Jesus occurred.
The mountain is mentioned for the first time in the Bible in the Book of Joshua (19:22) and now houses a three-aisled basilica, built on the design of architect Antonio Barluzzi. It was inaugurated in 1924.
The moment of the Transfiguration is the moment when Jesus, after being secluded with his disciples Peter, James and John, show the change of his appearance to the three disciples with an extraordinary splendor and in amazing white garments. Also, in this context, it takes the appearance of Moses and Elijah who speak with Jesus and you hear the voice that declares Jesus as God's son. The splendor of Christ as it brings Him to its transcendence, along with the presence of Moses and Elijah symbolizes the law and the prophets who announced the coming of the Messiah, in his passion and glorification.
We celebrated Mass in the Basilica and, shortly after, I had the opportunity to interview Father José Clemente Muller, a Brazilian Franciscan in charge of the local housing. The concept of colour, brightness and whiteness are the issues on which he focused on, symbols the represent the act of transfiguration.
Mount Tabor, with the cross on a hill, despite being identified as "high mountain," offers a beautiful view of the Galilee that dominates the area. A name, Tabor, which I brought to mind the Recanati hill made famous by one of the most famous works of Giacomo Leopardi, The Infinite.
A feeling reigns on that mountain, with the plains below and the green nature around. A special place, the northern border of the promised land.
--
Matteo Ciofi is an Italian producer for Salt + Light. Follow him on Twitter!